Turning the Cliché Upside Down by Tara Mills

We all know the clichés about infidelity and politics. It’s practically a given that we can expect to see a few high profile politicians caught in sexually compromising situations each year. The stories are so commonplace they’ve ceased to be stories.

Then I heard an interesting Behind the Music story on CBC Radio 2 one day and my eyes popped. I suddenly saw how the typical scenario could be flipped and freshened. This revelation was spawned by Margaret Trudeau, the wife and first lady to the former Canadian Prime Minister, Pierre Trudeau. She caused a scandal when she disappeared for seven days and seven nights, without word, to hang out with the Rolling Stones in New York City. When Margaret was eventually located, at their hotel with them, eyebrows shot even higher. Under pressure to return to her waiting husband, she promptly flew home and announced she wanted to get her own apartment in NYC and commute back and forth to Ottawa. She’d found the role of first lady dull. It didn’t suit her.

I immediately began to consider what it would be like for a neglected political wife, particularly one married to a man with power and influence. What if she’d already become merely a prop at his side, meant to personalize him with voters? As in the original version, I intended to make Justine’s forbidden love interest a musician. Sean chose photographer instead. He was right, of course. I love how he asserted himself. As a sensitive and perceptive photographer, her loneliness, dejection, and isolation, even in a crowded ballroom, reached out to him. They were both on the edge of that world, yet apart from it. You could almost say they were destined to meet.

But innocent or not, the scandal breaks and that’s when things get really exciting. So join Justine and Sean and let your heart decide where she truly belongs. 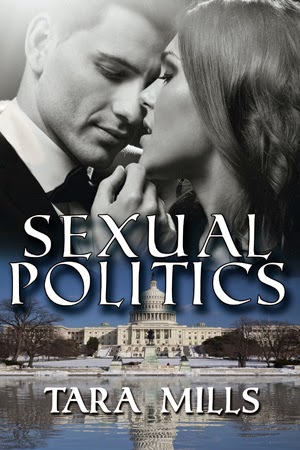 Is the scandal worth it? Only she can answer that.

For two years Justine Hubbard has played the supportive wife role for her husband in public…and nowhere else. Senator Gary Hubbard's philandering ended her love for him. But sometimes there are reasons people decide to maintain the illusion of a happy marriage when the relationship is over.

Living a lie until after the election wasn't an issue—until she met Sean O'Donnell. She can't fool the perceptive photographer. He understands her. He wants her. After feeling invisible to her husband, that's an intoxicating discovery. But having condemned her husband for his hushed affairs, it would be hypocritical to give in to her desire for Sean.

All it would take is a whisper of scandal for her husband's political enemies to bring him down. She wouldn't dream of sacrificing Gary's career, their causes, and her own good name. But how can she stay away from Sean now that she's fallen for him?

The senator put his arm around his wife while she stood, frozen, her smile brittle on the edges. "Justine is a big patron of the arts. I'm glad she found someone interesting to talk to tonight. She hates these functions."

Sean smiled tightly, noting her discomfort. "She's not the only one."

"Yes, well…" The senator rubbed his hands together. "The sooner I get out of here, the sooner I can get home."

Sean felt the next perfunctory kiss was for his benefit. His heart went out to her.

"Don't wait up," the senator said to his wife.

One more insincere handshake with Sean and the man was gone.

She seemed to shrink, as if letting go of the tension took an inch off her height. "I think he forgot to call for my car."

The corner of her mouth twitched and she nodded, her lovely hazel eyes shining, though not a tear fell.

They ditched their glasses and headed to the atrium. Twice his hand strayed automatically toward the small of her back as they walked. He had to remind himself not to touch her.

Collecting their coats, he helped her into hers then slipped on his own, winding his slate gray scarf around his neck.

He didn't hesitate to offer his arm on the way out. Her high heels demanded it. Even though the sidewalk had clearly been shoveled once already, snow continued to fall, the scattered salt leaving circular patterns of melt amidst the slick. The doorman waved a cab forward and opened the door for them. Sean helped her into the back then slid in after her.

The doorman shut them in as Sean adjusted his long coat on the seat around him. "Let's drop you off first."

"All right." She leaned forward and gave the cabbie her address.

Justine was hyper aware of O'Donnell's hand resting on the seat not eight inches from hers as they rode across the city. If they both stretched out a pinky, they might even touch. Beyond handshakes, she hadn't touched a man in so long. Gary no longer counted. He only touched her in public. After his second affair, she'd insisted.

Her life, her marriage, her husband—all of it was a sham.

Glancing surreptitiously at Sean O'Donnell as he watched the scenery pass, she was struck by how handsome he was, in a completely natural way. There was no hint of product in his hair to tame and control the wayward curls flaring out behind his ears. If anyone gave Gary's hair a little pat it would shift on his head like one solid, perfect helmet.

Even though it was faint, she could smell Old Spice coming off her quiet seatmate. It made her smile. Ah, memories. Back in the day, she used to love that aftershave. Gary only wore expensive cologne.

Sean cleaned up nicely, but she could tell he was as uncomfortable with the public side of his life as she was with hers. There was something genuine about him. After living with a facsimile of a human being for seven years, that was an attractive quality to have.

The cab turned onto her street and she began to worry the purse in her lap. Their ride had taken no time at all. They pulled to the curb in front of her townhouse and she started to open the clasp on her purse for her share of the fare. That's when Sean O'Donnell finally touched her bare hand, stopping her.

He exited the car then held the door, assisting her out. "I'll walk you up."

Afraid it would feel too much like the end of an awkward date, she declined his offer, though she appreciated his consideration. "That isn't necessary."

"Don't forget, the Russell Gallery. I hope to see you there, Mrs. Hubbard."

Flattered, she laughed softly. "I'll be there. But please, call me Justine."

She liked how his eyes crinkled at the corners when he smiled. "Sean."

"Thank you for the ride."

"My pleasure. Goodnight, Justine." He stood there, silent and seemingly unaffected by the large, fluffy snowflakes settling on his hair and shoulders.

"Goodnight, Sean." Feeling a blush coming on, she hurried up her front steps and slipped her key in the lock. He was still watching over her from the open car door when she turned on the light and stepped into the foyer. Lifting her hand, she gave him a final parting wave.

Nodding once in return, he dipped his head and got back into the taxi.

As the car pulled away, she fell against the door and turned the deadbolt, her heart racing in a thrilling and inappropriate way.

I write stories I like to read–contemporary romances with identifiable characters and themes. Life is hard. Love makes it bearable. If you enjoy stories with heat and humor, I have a title for you.

I’m a pampered wife, lucky mom to three amazing sons and one wonderful daughter-in-law, and I recently became a very young grandma. I should probably underline the word very. Oh heck, why not the word young too? Nah, you get the picture. I’m also the daily monitor of one naughty dog with attitude.

Tara is giving away to a lucky winner a choice of eBook from her backlist.

For a chance to win please fill out the Rafflecopter below.

A Little Fiction of Every Flavour

Find Your Next Read