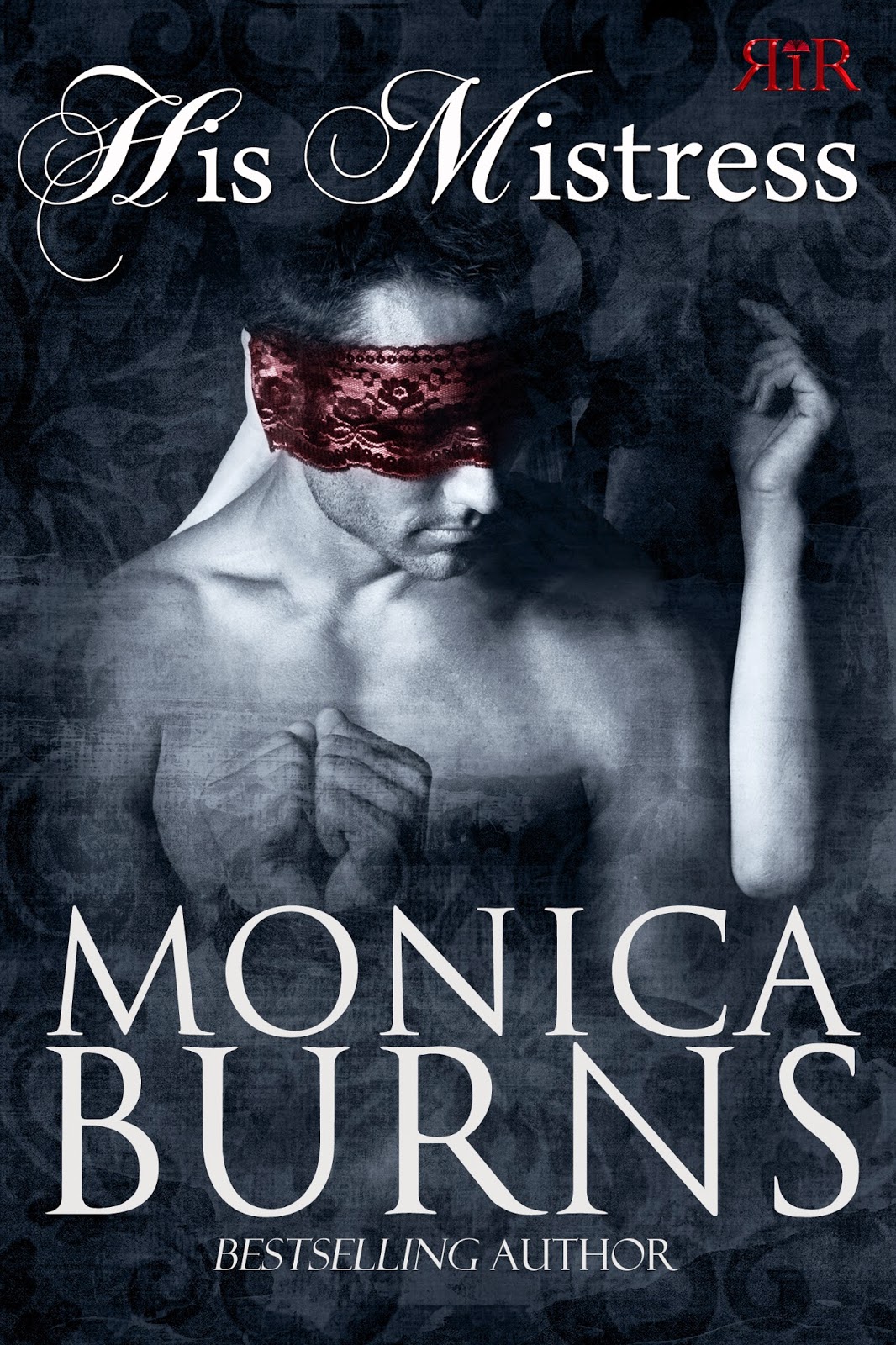 His Mistress
By Monica Burns

As a solicitor seeking justice for victims of violence, Tobias Lynsted must maintain control at all times while working in the seedy underworld of London’s East End. The darkness of his world creates a need for the intimacy and release he can only find in the forbidden pleasure of submission. The kind of pleasure where a powerful man has the freedom to let go of his control for a few sweet moments of oblivion. But when a blackmail scheme forces him to marry, the last thing he expects in a wife is a woman who will satisfy the darker side of his nature.

Lady Jane Grisham has no desire to marry, but choosing marriage over a life of destitution is an easy choice to make. Although Jane knows love is for the foolish, Tobias awakens her most wicked and darkest of desires. In the sinful world of domination and submission, Jane uses her blossoming skills to make Tobias surrender not only his body but his secrets. But she quickly discovers that the true test of her strength is trusting Tobias with her heart.

“I said kiss me again.” A sultry smile curved her lips. “Would that be such a difficult task to perform?”

Christ almighty, she wanted him to kiss her again. And she was ordering him to do so. She was a seductress demanding she be pleasured. Temptation threatened to overrule every sane thought he possessed. With one simple act, he’d awoken the beast inside him. A dragon that would devour her in one fiery breath. His gaze didn't wander from her face as he struggled to devise a reason not to obey her command. In the back of his mind, a realization hollered out at him, but it subsided into the background as he shook his head as if doing so would clear it.

“I don’t think that would be appropriate,” he choked out. “As you said earlier, a more private setting is called for.”

“Very well,” she murmured as she turned away and walked toward the door.

Relief lashed through him at the realization she’d spared himself and her from the darkness that flowed through his veins the moment she’d uttered her command. Disappointment followed a brief moment later. Bloody hell, he was mad to even consider the possibility of exposing her to his demons.

Tobias took a step forward to follow her then froze in his tracks as Jane locked the door. Disbelief made his muscles draw up taunt as she turned to face him and held up the key for a moment before slowly tucking it down into her bodice.

“There, I think we have all the privacy we could want. Wouldn't you agree?”

There was a mischievous look on her face, but it was the determination in her voice that said he was in trouble. With a shake of his head, Tobias fought back the urge to give into her demands. Suddenly remembering the door into the earl’s study, he allowed himself a smile.

“I think my best course of action is to take my leave through your father’s study.”

He turned away with great effort as his mind flashed images of the dark, luscious valley the door key was nestled against. Even more dangerous than the image was the voice in the back of his head that said she needed to be kissed thoroughly. Kissed hard until she understood she was playing with fire.

Tobias crossed the floor to the door of the earl’s study and turned the knob. Locked. For a moment, he simply stared down at what should have been his salvation before he looked over his shoulder at Jane. Her lovely mouth curved in a slight smile, she rolled her shoulders in a small shrug.

“Father always locks his office when there are guests in the house.” The amusement he heard in her voice made him growl with frustration. In several long strides he was mere inches from her and returning her satisfied expression with a glare.

“You've no idea what you’re asking of me, Jane.”

“Ask?” bit out between clenched teeth. “I’d call it more of a command.”

“And would it be so difficult to surrender to my…command?” The softly whispered question was like a velvety iron fist to his stomach. He ignored the question.

“If one plays with fire, one should be prepared to burn, Jane.”

“You say that as if I’m in danger from you.”

“Maybe you are,” Tobias growled as the scent of her invaded his nostrils. God almighty, he wanted to bury his face in her neck just to savor her like one did the fragrance of a fine bottle of wine.

“Then I would like to experience that danger.” She reached out to brush her fingers across his unmarred cheek. “Now kiss me. I’ll not produce the key until you do as I say.”

“Do not forget that I warned you,” Tobias rasped as he tugged her into his arms with a suppressed violence at the way she’d forced his hand.

Not waiting for her reply, he crushed her lips beneath his. Desire pounded its way through his blood as he molded her to his body. Beneath the harshness of his kiss, she froze against him, and he prepared himself for her protest. It didn’t come. Instead, she became soft and pliable in his arms. Deep inside, he shouted the need to stop this madness, but he ignored the warning.

With a sharp nip at the plump skin of her lower lip, he waited for the gasp that would part her lips. A fraction of a second later, his tongue slipped past her teeth to plunder her sweet succulent mouth. Mint and a hint of citrus made her taste cool and tangy. The flavors reminded him of her strength and the occasional mischievous side she kept hidden beneath her serene countenance.

One arm wrapped around her waist, he caressed the side of her throat with his free hand. The pads of his fingers could have been touching silk if he’d not known otherwise. Eager to taste more of her, his mouth left hers to make its way across her cheek and down the side of her neck. A low moan broke free of her lips, while her head fell backward and her breasts press deeper into his chest. Immediately, his hand slid downward to caress the peach-toned swells of her breasts framed by her gown’s bodice. She was lovely, and she didn't deserve his darkness touching her in any form.

Desperately, he shoved aside the desire she’d aroused in him and prepared himself to secure the room’s key then leave her before he did something he regretted. In an adroit move, he plucked the key from between her breasts. At her small cry of surprise, he swung his gaze up to her face. Cheeks flushed with warm color, she had the look of woman ready for the intimate touch of her lover.

Subtle and feminine, her scent filled his nostrils with a hint of flowers in a summer meadow. The essence of her sank its way into him in a manner that sent alarm bells ringing in his head. Her fresh, feminine fragrance was a direct contrast to the shadows that filled his soul. Eyes closed, Tobias struggled to regain his self-control. His ability to do so was hindered by the sound of her ragged breathing, the softness of her pressing into his hard muscles, and the memory of her sweetly curved breasts.

The key slipped from his fingers to hit the carpet beneath their feet with a barely perceptible thud as he bent his head and probed the edge of the cleft between her breasts with his mouth. The quiet mewl of pleasure drifting out of her throat only increased the level of his desire as he allowed his tongue to imitate a more intimate act.

A bestselling author of spicy historical and paranormal romance, Monica Burns penned her first short romance story at the age of nine when she selected the pseudonym she uses today. Her historical book awards include the 2011 RT BookReviews Reviewers Choice Award and the 2012 Gayle Wilson Heart of Excellence Award for Pleasure Me. She is also the recipient of the prestigious paranormal romance award, the 2011 PRISM Best of the Best award for Assassin’s Heart. From the days when she hid her stories from her sisters to her first completed full-length manuscript, she always believed in her dream despite rejections and setbacks. A workaholic wife and mother, Monica believes it’s possible for the good guy to win if they work hard enough.

You can find Monica here: