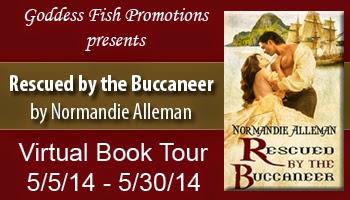 Welcome to my stop on the Virtual Book Tour for Rescued by the Buccaneer by NormandieAlleman, presented by Goddess FishPromotions.  Please leave a comment or question for Ms. Alleman to let her know you stopped by.  You can enter her tour wide giveaway by filling out the Rafflecopter form below.  You can also follow the rest of her tour here, the more stops you visit, the better your odds of winning. 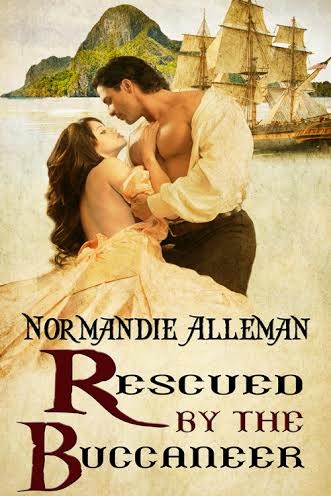 Rescued by the Buccaneer
By Normandie Alleman
Pirated of the Jolie Rouge, Book 1

When Frederica Beauchamp boards a ship for the Americas, she dreams of a life filled with adventure, but she gets more than she bargained for when her passenger ship is attacked by pirates. The heartless men kidnap her and force her to serve their captain—a fate that might be worse than death, since though he does not have his way with her, the captain delights in baring her, shaming her, and thrashing her bare bottom as punishment for every imagined disobedience.

After the pirates bring aboard an injured man found floating in the sea, Frederica tends to his wounds and learns that he is Gaston Galette, a survivor of a shipwrecked vessel. Gaston seeks her help to overthrow the vile captain, but when their plan goes awry he is forced to use all of his wiles to save them. As the naïve girl and the seasoned sailor navigate one perilous situation after another, he informs Frederica that the only way they can survive is if he is in command, and that if she thinks things can be otherwise, she will be taken over his knee for a bare bottom spanking.

As he watches the proud, willful Frederica bow to his authority, however, Gaston worries that her growing hold on his heart will be his downfall. He knows he cannot take a woman with him when he returns to his ship and crew, but when Frederica accepts his lustful dominance completely, submitting to him with grace and beauty no other woman could match, Gaston realizes that he may never be able to let her go.

“Gaston Galette at your service,” he said, dragging himself to his feet.

“What’s this I hear? We’ll be a-findin’ what the sea lost.” The booming voice preceded a broad, hard-looking man with a grizzled yellow beard.

Gaston assumed by the look of the man and his commanding tone that he must be the captain, and so he extended his hand, which the captain ignored. “Aye, Captain. Lost me ship. Appreciate you saving me from the depths.”

The captain eyed him suspiciously. “What happened to your ship?”

“We had a run-in with some rabble-rousers, and their cannon took out our rudder. Nasty business. Barely escaped with me life. I fear the rest of the crew didn’t fare so well.”

“You the captain?” the man grimaced.

“Quartermaster,” Gaston lied. “Plenty of experience at sea, sir. Perhaps I can make myself useful for you.” He looked around. “Not that it looks like you need any help. Fine vessel, she is.” Flattery would only improve the chances he’d see another day.

“Hmph. You’ll be earning your keep, fer sure, mate. Hand over your weapons.”

Gaston removed his scabbard and politely relinquished his sword and pistol. He had no intention of giving up the knife hidden in his boot.

“Better see to your wound first.” The captain snapped his thick, hammy fingers. “Freddie! Front and center,” he bellowed over his shoulder.

The mention of the man’s name caused quite a commotion. A buzz filled the air, and men stopped swabbing the deck. It appeared work would cease as the entire crew awaited the arrival of this Freddie person.

“Freddie will see to that,” the captain grumbled, pointing at Gaston’s oozing arm. “Report to me when it’s properly wrapped, and if I were you, I wouldn’t do anything unwise.” The captain brought his face right into Gaston’s, inches separating them. He glared at him and his voice rang of pure evil. “Heed me warning, or I’ll cut out yer gizzard, boy. Keep an eye on ‘im, Tiny.” The captain clapped the big man on the shoulder, turned, and marched below deck.

Gaston was so occupied watching him go that he was startled to hear Bradford say, “Miss Frederica. Cap’n wants you to see to the new man. Pulled him out of the ocean, we did,” he said, his voice ringing with pride. “‘E’s got a nasty gash in ‘is arm.”

Turning in their direction, Gaston found himself staring into a woman’s mesmerizing blue eyes. They were shocking, cold, and almost transparent—like ice. Pale pink ribbons entwined her waist-length chestnut locks, and she wore a frayed pink dress flocked with sun-bleached flowers. Numerous days at sea had freckled her smooth, creamy skin and had given a set to her jaw that spoke of something soft having hardened.

A lump formed in his throat, and he gulped self-consciously. It was unlike him to allow the fairer sex to affect him, but this Freddie was, quite frankly, the most beautiful woman he’d ever seen. 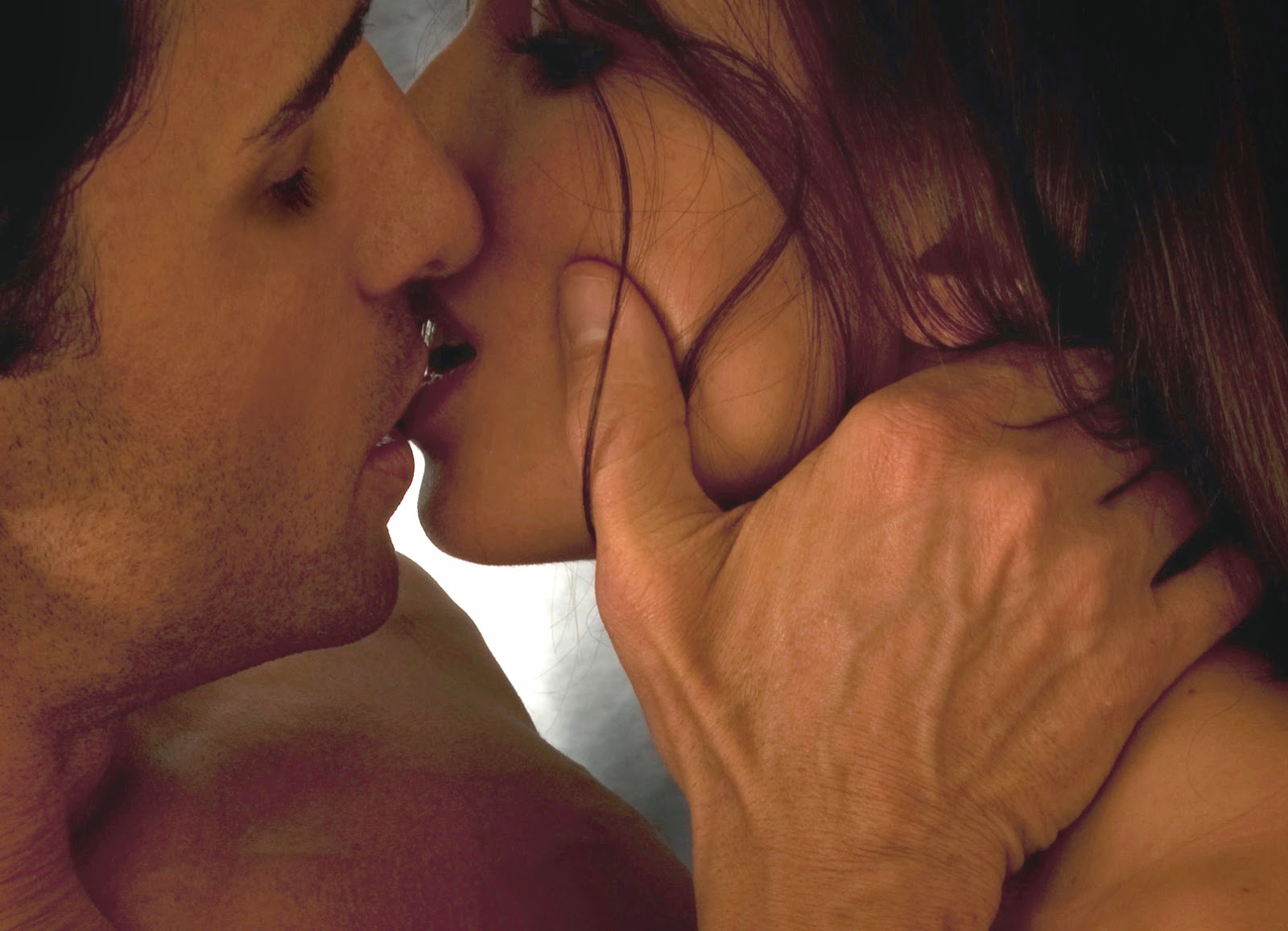 A former psychologist, Normandie has always been fascinated by human behavior. She loves writing quirky characters that are all too human. Fiber arts, baking, and Pinterest are a few of her favorite pastimes. She lives on a farm with a passel of kids, an adorable husband, and a pet pig who’s crazy for Red Bull.