Shades of Rose Book Blast for Defector by Denyse Bridger 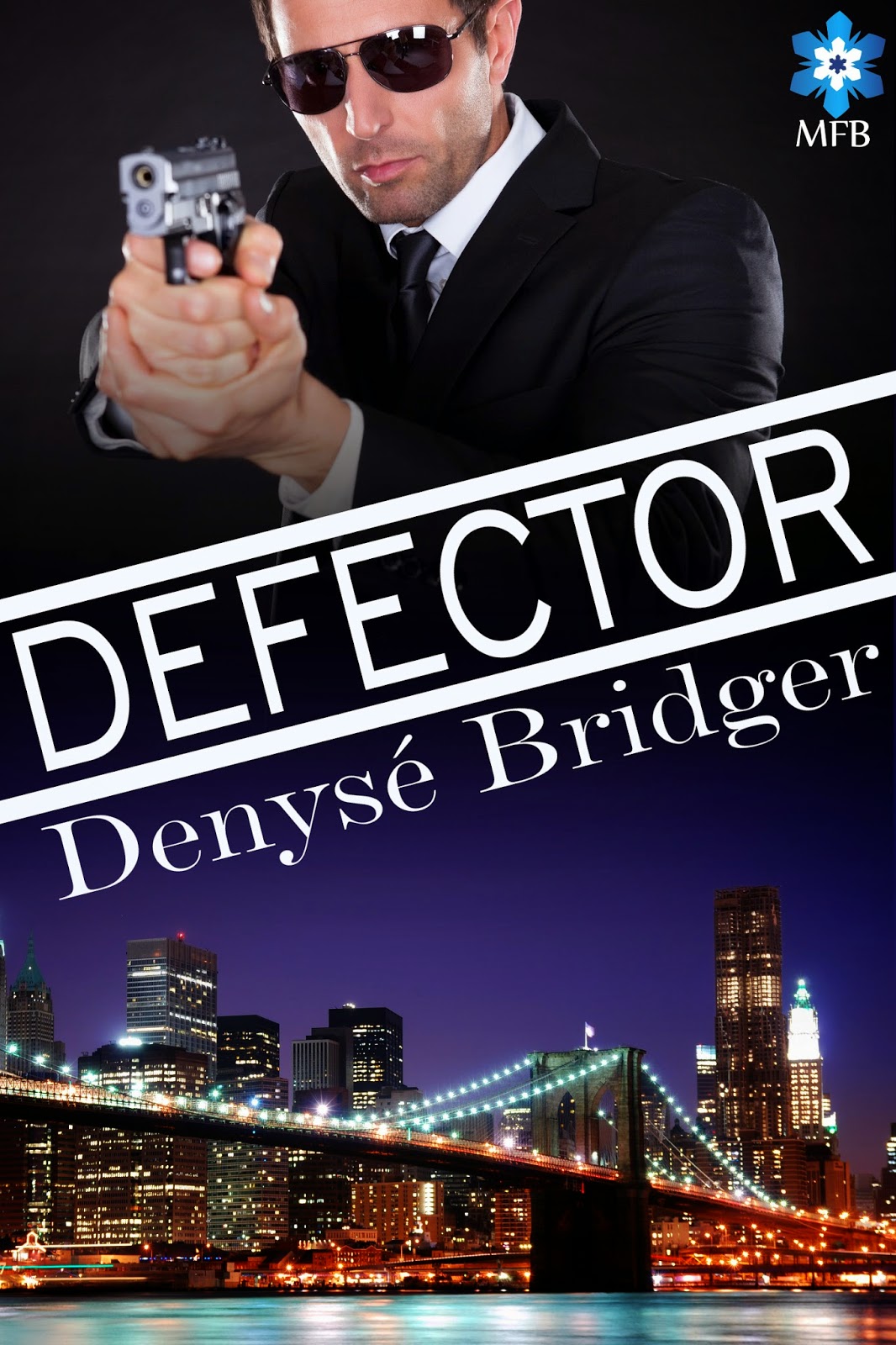 Andrew Dahle is a career spook, with no messy emotional ties to complicate his life. He’s worked with the best, and despite himself, he’s about to discover that he’s got friends he really didn’t know he wanted.

A straight-forward operation to grab a defector before he can leave the country with a top secret project goes wildly awry, and forces Andrew to choose between saving the life of a colleague’s son or nailing his target. To his great surprise, he saves the young man’s life, and wakes up in a hospital.

Grateful, Richard MacAvoy, a retired agent with his own elite contacts and players, steps in when Dahle is injured saving his son. Desperate to complete his mission, Andrew reluctantly accepts the help MacAvoy offers, and in the process just might learn that alone isn’t always the best way to work, and friends might be worth the vulnerability he’s always shunned.

Andrew felt the shadows releasing him, the sensation an abrupt, disturbing awareness that he knew he shouldn’t be experiencing. He trusted the instinctive alertness, though, and waited for the sound to give him a clear indication of where the danger was coming from. It only took a few minutes to locate the source, and Dahle’s eyes flew open just as the needle was being inserted into the I.V. tube that ran into his arm.

Andrew pulled the intravenous out as he forced his body into motion that it clearly objected to. The man hovering over his bed jumped back, his surprise giving Dahle his only chance to make a useful move.

Andrew threw himself off the bed and into the man next to it, taking them both down to the floor with a solid thud. He recovered quickly and landed a jarring blow to the man’s jaw. In the few seconds it took for the attacker to shake himself free of the pain, Dahle located the gun inside the other man’s coat. He pulled it free of the holster and pressed the barrel snugly between the man’s terrified eyes.

“Who sent you?” he demanded, the words little more than a rasp. He could feel the pulses of pain building with each breath, and he knew he’d probably torn apart whatever stitching the doctors had done earlier.

Dahle saw the refusal to answer before his assailant tried to offer him a response. He shifted his hold on the gun, then brought it down against the side of the man’s head, the action little more than a blur of smooth, practiced motion.

Andrew staggered to his feet and glanced around the room, suddenly expecting menace from every angle. He went to the locker and yanked his bloodstained clothes from the hangers. He dressed quickly, the gun within easy reach as he kept one eye on the door, then he slipped into position and waited. Instinct and experience told him there’d be more than one man sent for this kind of job. This one would have needed a lookout to warn him of possible interruptions by hospital staff.

He didn’t have to wait long for confirmation of his assessment. The door inched inward and Andrew banged the heavy metal panel back on the intruder, causing him to stumble. With a swiftness that stirred to life all the pain that he’d been fighting, Andrew reached for the wobbling figure and hauled him into the room. As the door swung shut on virtually silent hinges, Dahle slammed his captive against the wall and glared into the dazed features of the startled man.

He recovered a little more quickly than his partner and before Andrew could prevent it, he was struck soundly in the stomach. Gasping, Dahle almost passed out completely when the man’s fist came down hard on his injured shoulder, and he lost his grip on the gun he had been holding. He wheeled back and barely managed to dodge another punch aimed at his vulnerable shoulder. He spun on his heel, used the momentum, and landed a surprisingly solid kick to the second attacker’s midsection. He went down on his knees in front of Andrew and Dahle grabbed a handful of hair, then yanked back with all his strength. He heard the distinct crack of bones, then released the man to fall into a lifeless heap at his feet.

Glancing around him, Andrew knew the room would be crawling with people before too much longer. He needed to get out of the hospital, and quickly. Picking up the weapon he’d dropped minutes earlier, he ducked his head around the door. When he saw no one coming in the direction of his room, he slipped into the corridor and headed for the elevator.

He didn’t get to the end of the hall before he heard the sounds of commotion behind him. The bodies in his room must have been discovered a little more quickly than he was anticipating. He looked automatically toward the elevator and realized he wasn’t going to reach it, or the stairs, without being spotted. His entire body was alive with pain and he could feel the knots in his stomach twisting tighter as he fought down the agony-induced nausea. He stumbled into a wall as another wash of dizziness blurred his vision and threw off his balance. With an effort of sheer determination, Andrew reached for the door knob and almost fell into the room...

Canadian born and bred, and a lifelong dreamer, I began writing at an early age and can’t recall a time when I wasn’t creating in some artistic form. My life has had several on-going love affairs that shape much of what I write, the American West, Victorian England, cowboys, a passion for pirates, Greek Gods, and Ancient Egypt. The other endless love affairs in my life are Italia and all its magic, beauty, and dazzling culture, and a passion for Romania. Those loves spill into all aspects of my life.

In the past half dozen years, I’ve signed with over a dozen publishers, and have released books in all lengths and genres, and it’s something I hope to continue to do for many more years. A visit to my website will show the diversity of what is currently available, and the mixing of genres and styles that will be employed in many up-coming projects as well.