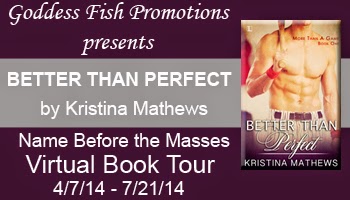 Welcome to my stop on the Goddess Fish Virtual Name Before the Masses Book Tour for Better Than Perfect by Kristina Mathews.  Please leave a comment or question for Ms. Mathews to let her know you stopped by.  She will be awarding a $10 Amazon GC plus a digital copy of her book to a randomly drawn commenter during her tour so please be sure to leave your email address with your comment.  You can follow her tour here, the more stops you visit, the better your odds of winning.

Sports Romance and The Single Mom
by Kristina Mathews

When I first got the topic for this guest post, I thought, I don’t know anything about being a single mom. The one or two weekends when my husband was out of town and my two sons had games at the same time on opposite ends of the county were nothing compared to having to be the sole parent 24/7.

My characters in Better Than Perfect know a lot about single parenting and sports. Johnny Scottsdale was raised by a single mother. He escaped a difficult childhood by getting involved in baseball. His coach eventually took him under his wings and helped him get into college and later, the Major Leagues.

Alice Harrison grew up with both parents, but her father resented her for making him give up on his own football dream. So when she became a single parent, after losing her husband in an accident, she turned to baseball as a way to bond with her son, Zach.

Zach grew up idolizing pitcher Johnny Scottsdale. When he finds out that his mom not only knew him in college, she’d dated him, he starts to wonder if Johnny is more than just his hero.

As Alice sees Johnny and Zach together, she wonders if the decisions she made when she first found out she was pregnant were the right ones. She’d let Johnny go off to the minor leagues not knowing he might have been a father. She accepted their best friend’s offer of marriage, even though he knew the baby could have been Johnny’s.

Johnny had become a star, Alice had become a wife, and Zach had grown up believing he could grow up to be just like his hero.
Most of my books contain some element of single parenting. At least one of my main characters has grown up with only one parent present in their lives. I also have single moms as the heroine or an unexpected pregnancy and a woman who must face the possibility of raising a child on her own. Having a child raises the stakes.

I was raised by a single mother. She had plenty of help from extended family. My great aunt and uncle took us in when I was a baby, and I spent most of my childhood summers with them. They helped me learn a love of travelling, cooking (both Auntie and Uncle were great cooks), and they gave me a great example of marriage based on friendship. Uncle was the one to walk me down the aisle when I got married and Auntie is the strongest and kindest woman I’ve ever known.

My mom taught me to never give up on my dreams. She’s the kind of person who, when told she can’t do something is even more determined to do it. Failure was not an option. Sometimes she took the long road, the hard road, but even when she had to pave that road herself, she led me to believe that there were no roads closed to me.

I’m grateful to have had the support to be able to take this journey and bring my characters to life. They didn’t have to have the perfect childhood to find their happily ever after. And neither did I. 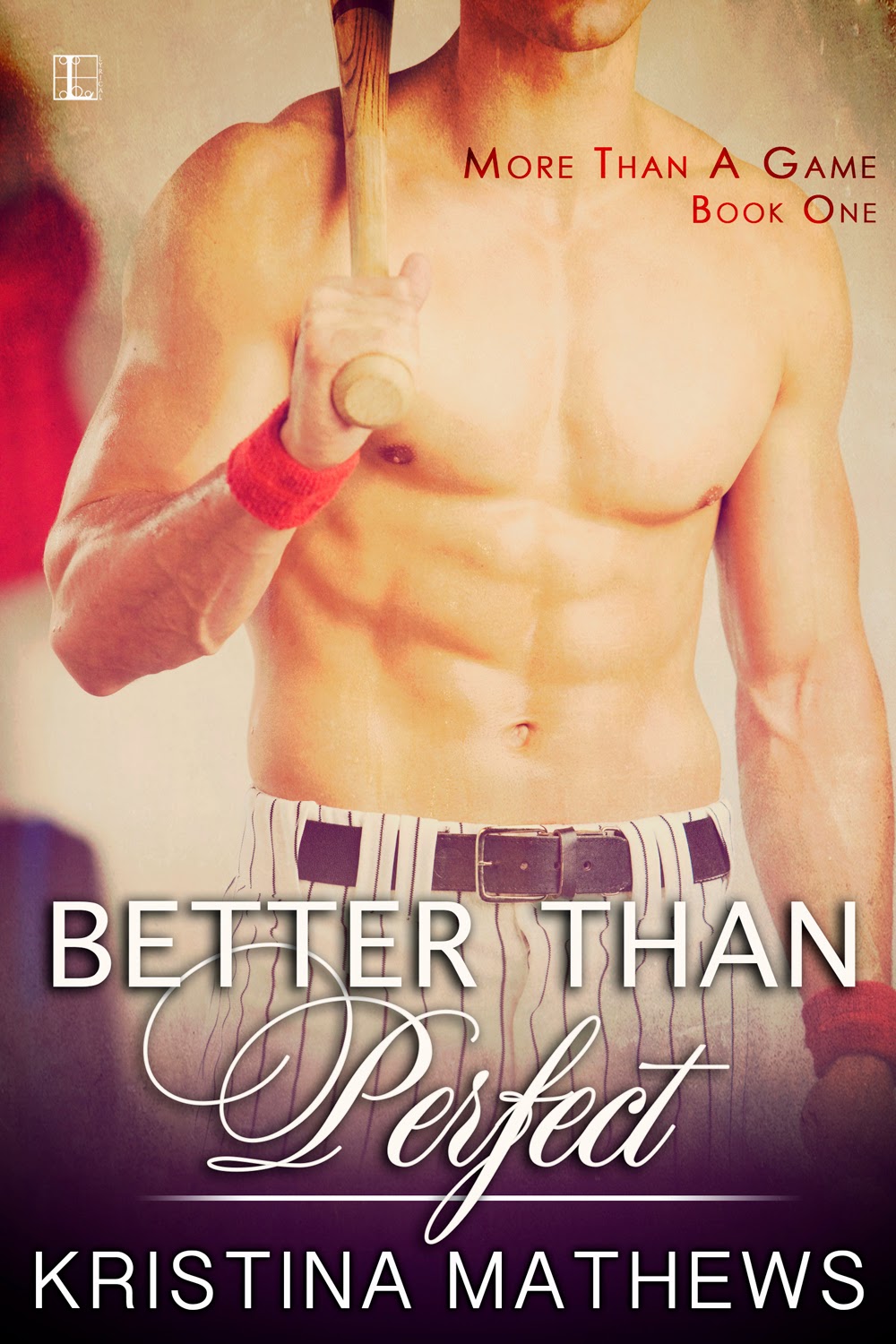 By Kristina Mathews
More Than a Game, Book 1

The woman he left behind and the son he never knew are tougher opponents than any he’s met on the field.

Pitcher Johnny “The Monk” Scottsdale has won awards, been named an All-star and has a perfect game to his credit. Known for his legendary control both on and off the field, his pristine public image makes him the ideal person to work with youth players in a preseason minicamp. Except the camp is run by the one woman he can’t forget…the woman who made him a “monk.”

Alice Harrison’s three strikes include an unexpected pregnancy, a marriage of convenience and young widowhood. She once traded her dreams so Johnny could have a chance at making it to the Majors. Johnny comes back into her life just as she’s ready to resign as foundation director and pursue her own dreams of finally earning her teaching credential. Her plans may go on hold, though, depending on the reaction when she confesses she may have kept a major league secret from Johnny and her son.

With the minutes ticking by until Johnny will leave for spring training, they’ll need to let go of the past and work together in order to win the game of love.

“Yeah, the kid’s kind of growing on me.” Johnny sounded surprised. But pleased. “I thought it would be hard to be around him. Since he’s…Mel’s. But, he’s such a great kid.”

The lump in her throat grew. She should tell him. Now. Before she lost her nerve.

He stepped toward her. “You have mascara, here.”

He reached out and wiped the smudge under her left eye. Her lashes automatically fluttered closed at his touch. A sigh escaped her lips, an instant before he captured her mouth with his.

He pulled her closer. Closer. Kissing her like they’d been apart for merely a two-week road trip, not fourteen years. His hands wove through her hair. Moved down her back. She leaned against him. She could feel him, his need pressing against her belly. Her insides dissolved. Longing filled her. Powerful. Uncontrolled.

She was about to surrender completely, when she heard the toilet flush upstairs.

“Johnny. Wait.” She pushed him away. Smoothed her blouse. Her hair. “Zach’s upstairs. He could come down any minute.”

“Right. Zach.” Johnny stepped back and her heart gave a small whimper. “I should go.”

“Johnny, please… Stay.” They needed to talk. She needed to tell him the truth. Or what could be the truth about Zach.

“I really need to go.” His eyes rested on the formal family portrait. He didn’t need to tell her any more. He wasn’t ready for a family. 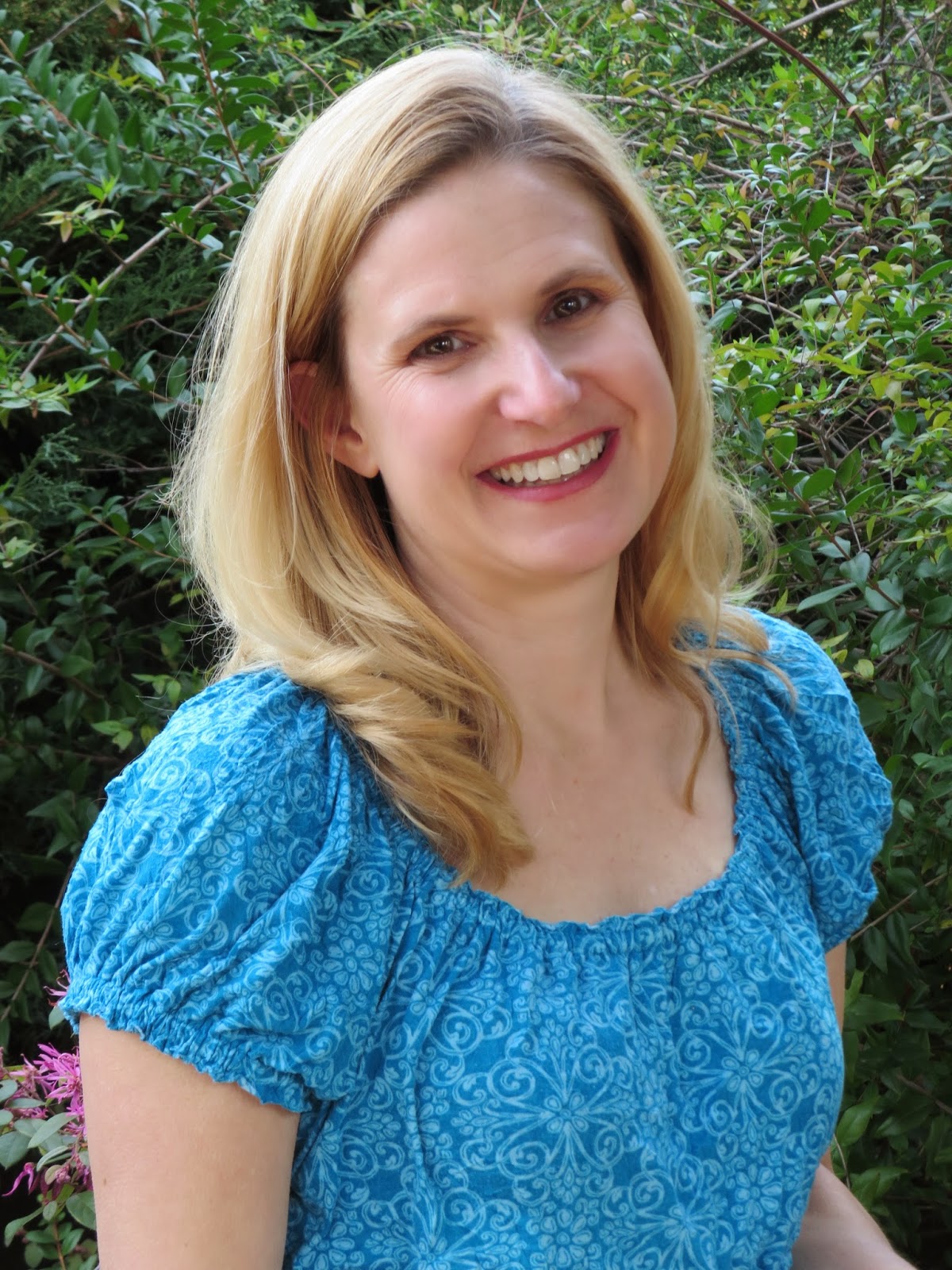 Kristina Mathews doesn't remember a time when she didn't have a book in her hand. Or in her head. But it wasn't until 2010 that she confessed the reason the laundry never made it out of the dryer was because she was busy writing romance novels.

While she resigned from teaching with the arrival of her second son, she's remained an educator in some form. As a volunteer, Parent Club member or para educator, she finds the most satisfaction working with emergent and developing readers, helping foster confidence and a lifelong love of books.

Kristina lives in Northern California with her husband of twenty years, two sons and a black lab. A veteran road tripper, amateur renovator and sports fanatic. She hopes to one day travel all 3,073 miles of Highway 50 from Sacramento, CA to Ocean City, MD, replace her carpet with hardwood floors and serve as a “Ball Dudette” for the San Francisco Giants.

Don't forget to leave a comment or question for Ms. Mathews to let her know you stopped by.  She will be awarding a $10 Amazon GC plus a digital copy of her book to a randomly drawn commenter during her tour so please be sure to leave your email address with your comment.  You can follow her tour here, the more stops you visit, the better your odds of winning.
Posted by Maria D. at 1:00 AM