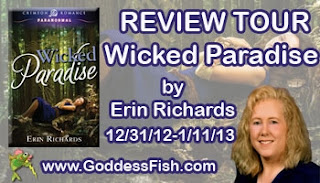 Welcome to my stop on Erin Richard's Virtual Review Tour for Wicked Paradise.  Please make sure to leave a comment or question below for Erin to let her know you stopped by.  Erin will award one commenter at every stop an eBook copy of her paranormal romantic suspense novel, "Chasing Shadows"(published by Ellora’s Cave Blush imprint);and one randomly drawn commenter on the tour will receive a $25 Amazon or Barnes and Noble gift card, winner’s choice.  You can follow her tour stops here, the more often you comment, the better your odds of winning. 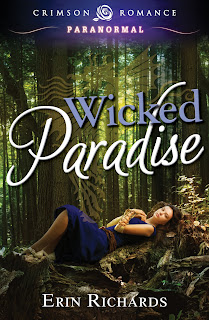 Balanced between the future and the past lies a pre-utopian paradise that may be mankind’s last hope for survival. Yet the island hides a sinister secret…a fearsome demon from ancient Ireland is imprisoned there and it’s about to escape to the twenty-first century.

Desperate to save a future post-apocalyptic world from total destruction, sorcerers send the most powerful sorceress from medieval times, Morgan of the Druids, through time to an island prison to kill WindWraith, the long-imprisoned Fomorian demon.

After a deadly squall tosses Druid-assassin Ryan O’Rourke into the Pacific Ocean, he washes ashore on an unchartered island brimming with magic. Ryan’s determined to find a way to return to Earth’s wasteland to battle the resurrected Fomorians plaguing the dwindling human race. When he stumbles across the enchantress who tantalizes his dreams to the point of madness, his plans turn upside down. For she stirs in him a hunger that puts his life’s purpose at risk.

Morgan has no choice but to kill the Fomorian before it kills her. But Ryan has other plans for the demon .... Now Morgan and Ryan must decide between love and duty in a perilous race against the evil that could destroy Earth.

“Run.” Ryan gently pushed her in front of him. “Keep to the right.”

She tore off in the direction he pointed, heedless of the limbs and plants lashing her arms and legs, snagging her clothing, reaching for her and trying to cling. Was the island also afraid of the Fomorian?

“There’s a path down the cliff you flew off earlier. It leads to a naturally shielded

cave.” He nudged her from behind, his hand firm in the hollow of her back.

Tornado howls grew deafening. Morgan tripped over a crumbling log, and Ryan grabbed her waist from behind to prevent her from planting her face in a prickly bramble. Hot and solid, his hands pulled her against his slick torso. Wretched jungle! You wasted no time to push us together again.

“Thank you.” Waning energy forced her to wheeze out the words. Before she lost all her stamina and wilted to the ground, Ryan picked her up, cradled her to his chest. His heart pounded against her shoulder, his internal fire wrapped around her, turning her muscles to mush. “Is it much farther?” She gave into his strength. So be it, island. You’ve had your say for now.

He shook his head. “I’m sorry,” he muttered, shame flirted with his immutable arrogance in the downturn of his mouth. He veered to the left and headed down a short, steep incline. “I shouldn’t have been a power-tripping jackass.” 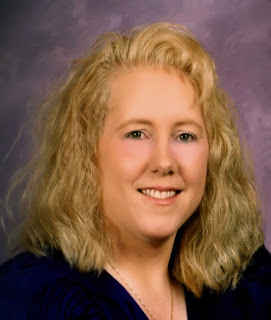 A voracious reader since childhood, it was no hard leap to recognize that Erin wanted to be a writer at a young age. After bemoaning the lack of young adult books to read, Erin wrote her first novel at the age of eighteen hoping to shift the tide. Then everyday life took its toll on her writerly dreams until 2003 when she couldn’t ignore the writing bug any longer. By then, she had immersed herself in reading adult fantasy and romance novels. Writing paranormal & fantasy romance was a no brainer. Her first novel CHASING SHADOWS, a paranormal romantic suspense, is now available in print for the first time. Crimson Romance released her second novel WICKED PARADISE, a fantasy romance, on August 13, 2012. Erin will finally realize her lifelong dream of publishing a young adult novel when VIGILANTE NIGHTS debuts in July 2013.

Erin Richards lives in Northern California where she drafts and negotiates high-technology contracts during the day. When she’s not working or writing, she enjoys reading, photography, and American muscle cars.

Readers can reach Erin at:

Seeing your own death is never pleasant, especially if your Morgan, one of the most powerful Druid priestesses of all time.  Believing she has no future, Morgan is surprised when her father insists she accompany him to the magical stones on Avalon on her birthday.  The day she's sure is her last. As her father tells her of a different future where she's responsible for the continuation of magic and mankind, Morgan finds herself transported into the future on Avalon with only the knowledge of the task she must complete - kill the WindWraith and survive to carry on her bloodline.

Ryan O'Roarke, a Druid assassin from the future, finds himself on Avalon with only one task - help a powerful sorceress complete her task.  Determined to do his duty, Ryan never expected to be captivated by her beauty or with having to save her life and their joint future.  Will Ryan's skills be up to the task?

The scenes between Morgan and Ryan are entertaining, full of good dialogue and smoking hot chemistry.  While they are both tasked with saving the future, their differences keep them from completely trusting each other.  I enjoyed how Ms. Richard's developed their characters; they both had to overcome issues from their pasts in order to work together and accomplish their joint goal.  As their adventures bring them together they are forced to learn to trust each other.

The secondary characters are also well written and helped move the story along.  The setting, the island of Avalon, was well described and almost a character itself - it's easy to see why it's the ideal setting for this type of story.  The antagonist of the story, the WindWraith, was also well done and clearly not a demon to be trifled with.

Will Morgan and Ryan accomplish their goal and find the love of a lifetime? How will what takes place on Avalon affect mankind's future?  You'll have to read Wicked Paradise to find out.  I enjoyed it and look forward to reading more of Ms. Richard's work.

lease make sure to leave a comment or question below for Erin to let her know you stopped by.  Erin will award one commenter at every stop an eBook copy of her paranormal romantic suspense novel, "Chasing Shadows"(published by Ellora’s Cave Blush imprint);and one randomly drawn commenter on the tour will receive a $25 Amazon or Barnes and Noble gift card, winner’s choice.  You can follow her tour stops here, the more often you comment, the better your odds of winning.
Posted by Maria D. at 12:30 AM