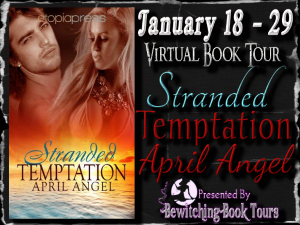 Welcome to my stop on April Angel's Virtual Book Tour for Stranded Temptation.  Please make sure to leave a comment or question below for April to let her know you stopped by. You can enter her tour wide giveaway by filling out the Rafflecopter form below.  You can also follow her remaining tour stops here. 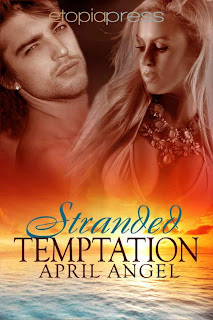 Stranded together, their passions will run wild.

Kara has a deep dislike for her boss, Max. She also wants him so badly it’s making her nuts. He’s a workaholic, a robot man. And he’s never shown the least bit of interest in her or anything else that wasn’t recorded in the corporate minutes. But when their plane crashes on the way to a meeting, leaving them stranded on a deserted island…just the two of them, all alone with all that ocean around them…Kara decides it’s time to start living. And by living, she means using Max for all the hot sex she’s been denied.

Max wants Kara—has wanted her for a long time. Unable to come out and cross the line between professional and personal, he makes her accompany him on business trips just to have her around. When they crash land and Kara shows him how much she wants him, he decides to quit being so professional and take the woman of his dreams. After all, what happens in the middle of nowhere, stays in the middle of nowhere. Until they’re rescued.


Back in the real world, things aren’t as easy. Kara is afraid to start a relationship with a man who completely ignored her until she took off her clothes, and Max is afraid she’ll never be able to trust him.

But when someone makes it clear that Kara’s in danger, Max has more to protect than Kara’s feelings. And now that he has her, he’s not about to let her go.


Gentleness she’d never noticed before in Max was evident in his eyes. She watched him curl his large hand over her much smaller one. Her heart beat so loudly in her ears she feared he might hear it. He brought her hand to his lips and kissed it. Fire roared in her blood, and her breath hitched. He turned her hand over and brushed a warm, firm kiss over her palm while they stared at each other.

“I’d never put you in danger.” Deepened to rough gravel, the sound of his voice made her pussy throb and blood thicken in her veins.

Somehow she knew what he said was the truth. “Kiss me, Max.”

The words were barely out of her lips when he dragged her onto his lap and their lips met in desperation. Her arms twined around his neck. Pulling him closer, she brought her chest flush to his. Heat took over every cell of her body. His kiss devoured her. Lord, the man was a kissing god. With soft strokes of his tongue, he caressed the inside of her mouth. Whimpering in the back of her throat, she moved restlessly on his lap. The long, steel length of his cock was poking at her ass. He glided his hands under her top, making her belly flesh quiver. When his warm hands touched her skin, desire increased inside her tenfold. Breaths turned to pants. Her body thrummed with arousal. She tuned everything but the sight of him out of her mind.

She pulled back and smiled. “I want you, Max.”

He frowned and took a deep breath. “Kara, you’re in shock—”

Determined, she shook her head and cut him off. “No, Max. I’m alive.”

She smiled again and pulled off her top. Her bra was now the only barrier between her breasts and his hands. Swollen into tight points, the peaks of her nipples called for his touch under the satiny material. A combination of lust, hunger, and desperation flared in his eyes. His usually light gray eyes darkened to that of a murky, stormy day.

Air fought its way into her lungs. “I’m clean and on birth control.”

He continued to frown. “I’m clean too, but are you sure?”

In a smooth move worthy of any professional stripper, her hand reached behind her back, unsnapped her bra, and pulled it off. “Fuck me, Max. I want you inside me, right now.”

His hands curled around her head and held her immobile. Raw hunger made her body shudder. Their kiss turned into a greedy need to consume each other. Moisture gathered in her pussy, and an incessant throbbing took hold between her thighs. In a frantic mating, their tongues danced, rubbed, and curled over each other until passion overrode all else. Blind lust shot through her when she rocked her hips over his hard cock.

He kissed wet trails from her jaw to her breasts until he was sucking on one of her erect nipples. Her pussy clenched when he enveloped her breast with his firm lips. Soaked in her cream, her thong became a new point of friction on her swollen pussy lips. She tore at his shirt. A wanton urgency took hold of her and guided her actions. To feel his skin on hers became her only mission.

When he helped her take the shirt off, she splayed her hands over his bulging shoulders and sighed. When his warm muscles contracted, she groaned. He was a work of art. His chest was corded with muscles and bronzed to perfection. Just looking at him made her pant. Whimpers rushed past her lips when his teeth grazed her turgid nipple.

Again, he sucked and then nipped at the tight bud. She moaned and pushed her chest further into his face. He released her nipple from his lips and rolled the wet tip between his finger and thumb, tweaking the sensitive flesh while his mouth latched onto the other one for a taste. She dug her nails into his shoulders, holding him in her grip while rocking her hips over his cock. Movement made her open her eyes. Max had made the seat flatten back so that it was the size of a double bed.

A smile curled her lips when she gazed into his almost-black eyes. He motioned for her to stand. Once she did, he moved his hands to her white pants and slowly pulled the linen material, along with her thong, down her legs. With every inch of skin he exposed, he placed a kiss on a body part. First it was her stomach. Then it was her hip when he lowered the material down her legs. Her knee came next and finally her calf. Afterward he kissed his way back up to her stomach. She groaned and stood in place. He licked circles on her stomach and around her belly button. He caressed her breasts, down the sides of her breasts to her waist, and squeezed the flare of her hips. She took a choppy breath. He fluttered his fingertips down from her hips toward her core, and she bit her lip to keep from moaning. When he massaged her thighs, she was ready to beg him to touch her. Before she had a chance to, he moved a hand between her legs and dipped his fingers between her waxed pussy lips.

Each dip of his fingers into her wet sex made her whimper louder.

He stood, and she had to tilt her head back to look him in the eye. His eyes were sexy, stormy. He put his arms around her waist and held her tight to him. Their hearts beat in a furious, identical gallop. He switched their positions and pushed her to lie on the bed. 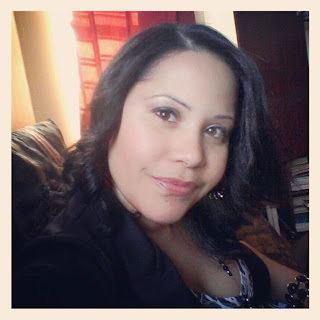 
Want to know about me? April Angel (aka Milly Taiden) was born in the prettiest part of the Caribbean known as the Dominican Republic. She grew up between New York, Florida and Massachusetts. Currently, she resides in New York City with her husband, bossy young son and their little dog Speedy.

She’s addicted to shopping for shoes, chocolate (but who isn’t?) and Dunkin Donuts coffee.

A bookworm when she can get her hands on a good story, she loves reading all Mina Carter, Cynthia Eden and Dianne Duvall among others.

Stranded Temptation, a fun, flirty and hot contemporary romance by April Angel takes a fast look at delayed gratification when a boss and employee, who've had the hots for each other for years, get stranded by themselves on an island when their plane goes down.  With just the right touch of character development, good dialogue and plenty of sexual heat, this was a quick trip to a tropical paradise on a cold winter's afternoon.  By adding in a light touch of mystery and suspense, Ms. Angel made a good romance even more interesting.

Accountant Kara Masters can't believe she had to give up her vacation cruise in order to accompany her boss on a business trip.  Determined to get control of her life, and quit working 12 hour days, Kara plans to quit as soon as they get back from South America.  She wasn't planning on a plane accident changing her outlook on life or her relationship with her boss.

Lusting after Kara, his employee for five years, CEO Max Richards, is determined to keep their relationship on a professional level only.  Needing her assistance in tracking down  the identity of someone who's been embezzling company funds, Max plans to fly them down to South America to get more information.  He wasn't planning on having to make a crash landing or on allowing his emotions for Kara to run free.

The scenes between Kara and Max are fun, flirty and super hot.  They have great sexual chemistry and their brush with death finally pushes them into doing something about their attraction to each other.  Ms. Angel did a nice job introducing the characters so when they become intimate early in the story, it doesn't seem rushed and isn't a shock.  I enjoyed watching Kara and Max as they get to know each other on both a personal and sexual level.

Will Kara and Max be able to work together now that they've become intimate on a personal level?  And will Kara be able to unearth the identity of the embezzler before another attempt is made on their lives?  You'll have to read Stranded Temptation to find out.  I enjoyed it and I think you will too.

FTC Disclosure: I received a complimentary copy of this book in exchange for a fair and honest review.


January 22 Promo and review
Not Just 9 to 5
notjust9to5.com

January 25 Interview
All I Want and More
www.alliwantandmore.blogspot.com