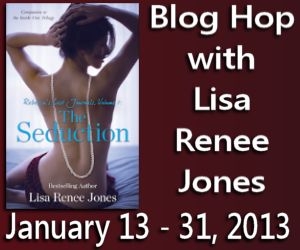 Welcome to my stop on Lisa Renee Jones Blog Hop for The Seduction, the first release in Rebecca's Lost Journals serial.  Please make sure to leave a comment or question below for Lisa to let her know you stopped by.  You can enter her blog hop giveaway via the Rafflecopter Link at the end of the post.

Thanks so much for having me today!

I am super excited that I am releasing Rebecca’s Lost Journals and the Master Undone, the serials which lead into the Inside Out Trilogy.

Inspired by a real journal found in a storage unit during my eight years buying and selling units, the series embraces the dark sensuality of Shades of Grey and the intrigue with storage units that is Storage Wars in one spine tingling series packed with mystery and passion. And now, there is a five part serial connected to the trilogy being released beginning on January 28th and beginning with Rebecca’s Lost Journals: The Seduction.


The serials offer readers an intimate look inside the journal writer’s life and her passions, while also being packed with clues to the series. You will find all kinds of hints about secrets in BEING ME!

I’m including a sexy excerpt from the first serial!

One day I was a high school teacher on summer break, leading a relatively uneventful but happy life. Or so I told myself. Later, I’d question that, as I would question pretty much everything I knew about me, my relationships, and my desires. It all began when my neighbor thrust a key to a storage unit at me. She’d bought it to make extra money after watching some storage auction show. Now she was on her way to the airport to elope with a man she barely knew, and she needed me to clear out the unit before the lease expired.

Soon, I was standing inside a small room that held the intimate details of another woman’s life, feeling uncomfortable, as if I was invading her privacy. Why had she let these items so neatly packed, possessions that she clearly cared about deeply, be lost at an auction? Driven to find out by some unnamed force, I began to dig, to discover this woman’s life, and yes, read her journals—-dark, erotic journals that I had no business reading. Once I started, I couldn’t stop. I read on obsessively, living out fantasies through her words that I’d never dare experience on my own, compelled by the three men in her life, none of whom had names. I read onward until the last terrifying dark entry left me certain that something had happened to this woman. I had to find her and be sure she was okay.

Before long, I was taking her job for the summer at the art gallery, living her life, and she was nowhere to be found. I was becoming someone I didn’t know. I was becoming her.

The dark, passion it becomes…

Now, I am working at a prestigious gallery, where I have always dreamed of being, and I’ve been delivered to the doorstep of several men, all of which I envision as one I’ve read about in the journal. But there is one man that will call to me, that will awaken me in ways I never believed possible. That man is the ruggedly sexy artist, Chris Merit, who wants to paint me. He is rich and famous, and dark in ways I shouldn’t find intriguing, but I do. I so do. I don’t understand why his dark side appeals to me, but the attraction between us is rich with velvety promises of satisfaction. Chris is dark, and so are his desires, but I cannot turn away. He is damaged beneath his confident good looks and need for control, and in some way, I feel he needs me. I need him.

All I know for certain is that he knows me like I don’t even know me, and he says I know him. Still, I keep asking myself — do I know him? Did he know her, the journal writer, and where is she? And why doesn’t it seem to matter anymore? There is just him and me, and the burn for more.

He motioned me inside and I stepped over the entryway. He shut the door behind me, but didn’t touch me. Instead he stepped in front of me again, and his gaze swept my scantily clad body, lingering on my tightly puckered nipples, male appreciation glowing from the depths of his gaze.

When his eyes lifted to mine again, he said, “Last chance to back out.”

I lifted my chin and met his stare. “I don’t want to back out.”

Satisfaction slid over his face.“Then there are rules.”

“Rules?” My knees were liquid, my body one big, eager nerve ending. I wanted his rules. I can’t explain why. I don’t understand why.

“Rules,” he confirmed. “To start, you don’t speak unless I ask a question.You don’t do anything I don’t tell you to do.You do exactly what I say you do. Normally, I would say I’ll also do anything I wish to you, but until we have an agreement with your limits, I’ll refrain from going places I might otherwise go.”

Some part of me rebelled. This isn’t me. I don’t get commanded by anyone but myself. But it was me.

“Yes.” I couldn’t keep the tremble from my voice.

Don't forget to leave a comment or question below for Lisa to let her know you stopped by.  You can enter her blog hop giveaway at :