Book Review - To Dance in Liradon by Adrienne Clarke 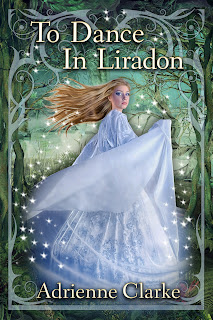 To Dance in Liradon
by Adrienne Clarke

Seventeen-year-old Brigid O'Flynn is an outcast. A chance encounter with the Faerie Queen left her tainted in the eyes of the villagers, who blame the Faerie for the village’s missing women and children. Desperate to win the village’s acceptance, Brigid agrees to marry her childhood friend: Serious, hardworking, Connell Mackenna. But when Connell disappears before their wedding, Brigid's hopes are shattered. Blamed for her fiancé’s death, Brigid fears she will suffer the same fate as the other village outcasts, the mysterious Willow Women. Lured into Faerie by their inhuman lovers, and cast out weak and broken, the Willow Women spend their lives searching for the way back into Faerie. When Connell suddenly reappears, Brigid is overjoyed, but everything is not as it seems. Consumed by his desire for beauty and celebration, Connell abandons his responsibilities, and Brigid soon finds herself drawn into a passionate, dangerous world of two.

When Brigid discovers the truth behind Connell's transformation she’s forced to choose between two men and two worlds. Brigid’s struggle leads her into glittering, ruthless Faerie, where she must rescue her true love from a terrible sacrifice or lose him forever.

A heroine who dreams of love, a hero who's never learned to say sweet nothings, and the enchanted land of the "Faire Folk" all play a part in To Dance in Liradon by Adrienne Clarke.  Likable characters, the conflict of a town caught between the superstitions of the past and the introduction of Chritianity, and a heroine who's not fully human, make for a captivating read.  Drawn to this book by the beautiful cover, the story transported me to another place and time where magic existed and a heroine has to choose between the hardships of being human and learning about love or the possibility of life in a fairy tale.

Brigid O'Flynn has never felt as if she belongs; different than most folks in town, a childhood experience with the Fairy Queen has made her somewhat of an outcast.  Working in the kitchen of the local lord's castle, helps her keep food on the table for what's left of her family; her aging mother and herself.   Dreaming of the love described to her as a child by her father's fairy tales, Brigid resents her mother's push to marry the local grain miller - a young man she's known since she was a child.

Connell Mackenna has always been attracted to Brigid and her love of dancing and music.  A practical young man, he had to grow up sooner than most when he took over his father's mill.  A kind man who's always felt drawn to those who need him most, Connell is determined to make Brigid his wife.  Capturing her heart is his private dream.

The scenes between Brigid and Connell are well written and have good dialogue.  They show the differences between their personalities and how much Brigid really needs to grow up.  A fanciful girl, she's still caught up in her daydreams about love.  For his part, Connell truly loves Brigid but has never learned how to express his innermost thoughts.  Ms. Clarke did an excellent job developing both characters and while I understood Brigid's dreams, I also realized how much she needed to take a look at reality.

When the "Faire Folk" get involved, all bets are off as to whether or not Brigid will recognize what's truly important.  Will Brigid learn to accept being a grown up and all it entails?  Will Connell ever learn to share his thoughts and emotions with Brigid?  Or will dancing and living with the "Faire Folk" be all that's in Brigid's future?  You'll have to read To Dance in Liradon to find out.  I really enjoyed it and I think you will too.  I look forward to reading more of Ms. Clarke's work.

FTC Disclosure:  I received a complimentary copy of this book as a part of a book tour in exchange for a fair and honest review.
Posted by Maria D. at 12:00 AM