Super Book Blast & Giveaway - Under Her Spell by Eliza Daly 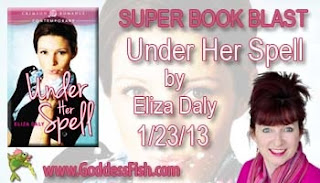 Welcome to my stop on Eliza Daly's Super Book Blast for Under Her Spell.  Please make sure to leave a comment or question for Eliza below to let her know you stopped by.  Eliza will be awarding one $25 GC, and three $10 GCs for either Amazon or BN to a randomly drawn commenters during the tour.  You can follow her tour stops here, the more often you comment the better your odds of winning. 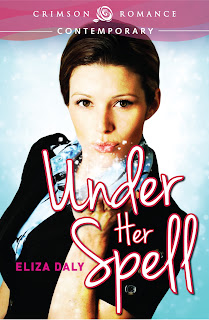 Under Her Spell
by Eliza Daly

When a series of failed relationships and business ventures have Monica Jackson doubting her self-worth, she turns to spell casting to attract positive energy and the opportunities needed to achieve her goals. But can Monica’s belief in spells restore her belief in herself?

Monica creates a spell to find her soul mate, and one to ensure the success of her new romantic event planning company, Enhance Your Romance. Monica is confident she has found her niche until divorce lawyer Reed Walker opens a practice next door to her office. The anti-marriage slogan plastered on his office window, and his down-on-love clients, quickly prove detrimental to Monica’s business. When his arrival appears to trigger a string of bad luck, Monica fears one of her spells sent negative energy into the universe and it has returned to her threefold. Although Reed is beyond sexy, and she admires his self-confidence, she’ll do whatever it takes to get the universe back on her side, and Reed out of her life. No way is she losing another business.

Reed finds himself attracted to Monica’s beauty and her optimism. His job and his parents’ divorce have made him a pessimist, especially when it comes to love. However, he soon finds that Monica’s pro-love attitude is rubbing off on him, causing him to lose his edge. If Reed doesn’t distance himself from Monica, he’ll likely destroy his reputation as a pit bull divorce lawyer.

Can Monica and Reed look past what they might be losing to realize the love they have found?

Monica turned and her gaze landed on a sign in the window.


She glanced up at the sign over the door. Reed Walker: Family Law.

Focusing on Chico’s lunch specials when she’d driven up, she’d failed to notice the new signs. “A divorce lawyer?” she muttered in disbelief. Her gaze darted over to the guy. “You’re a divorce lawyer? I thought you were a client.” Being attracted to a divorce lawyer was much worse than a client. Suddenly his eyes didn’t seem as blue and his arms looked wimpy. No way was he Italian. Or her soul mate. And what kind of straight guy wore lavender!

“A client?” He laughed as if that was the most ridiculous thing he’d ever heard. “Ah no, I just started moving in and stopped by to introduce myself.”

“You have to take down that sign.” Monica pointed at his window.

He arched an amused brow. “That’s the idea.”

“You can’t promote divorce.” She clutched his suit jacket, crumpling it in her hand.

“I’m not promoting it. It’s a fact of life. I don’t have any control over the average marriage lasting seven years, or that one in every two ends in divorce.”

Monica’s gaze skittered around frantically as she searched for a response that didn’t involve whipping the socket wrench through his window and mauling the sign to shreds. She spied a black Mercedes parked up the street. The license plate read No Mer-ce.

“Is that your car?” she demanded, pointing at the Mercedes.

“What are you so worried about? Doesn’t bother me being next door to a business that promotes romance and marriage.” 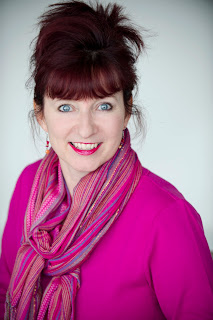 Eliza Daly’s first attempt at creative writing was in fourth grade. She and her friends were huge Charlie’s Angels fans and she would sit in her bedroom at night writing scripts for them to act out at recess the following day. She was Kelly Garrett. Fast forward to the present, she’s still writing stories about beautiful women who always get their men. The journey from fourth grade script writer to published author wasn’t an easy one, but it was always an adventure and the final destination was well worth it.

When Eliza isn’t traveling for her job as an event planner, or tracing her ancestry roots through Ireland, she’s at home in Milwaukee working on her next novel, bouncing ideas off her husband Mark, and her cats Quigley and Frankie.

You can find Eliza on the web at :

Don't forget to leave a comment or question for Eliza below to let her know you stopped by.  Eliza will be awarding one $25 GC, and three $10 GCs for either Amazon or BN to a randomly drawn commenters during the tour.  You can follow her tour stops here, the more often you comment the better your odds of winning.