Name Before The Masses Tour & Giveaway - The Arrival by Nicole MacDonald 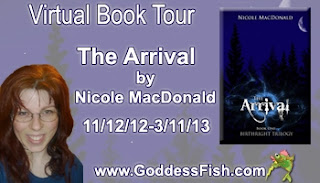 Welcome to my stop on Nicole MacDonald's Virtual Book Tour for The Arrival.  Please make sure to leave a comment or question below for Nicole to let her know you stopped by.  Nicole will be awarding a $50.00 gift card – Amazon or Barnes & Noble, winners choice, to a randomly drawn commenter during the tour. You can follow her tour stops here, the more often you comment, the better your odds of winning.

Interviewer: ‘Welcome to the show! Can you tell us your name and position, please?’

Ada: ‘Thank you! My name is Ada and I’m the newest fabricer at the castle in Elion.’

Interviewer: ‘Wow! That’s quite a position; can you explain to our audience what you do?’

Ada: ‘Sure, I have a gift which allows me to manipulate fabric with a thought. I can reweave the fabric and I use this gift to create clothing that a tradition tailor can’t. It means any piece I create is seamless and fits perfectly. I can also adjust the color within the fabrics.’

Interviewer: ‘That’s a really amazing gift, when did you first realize you could do this?’

Ada: *muffled giggle* ‘Ahhh… Well I didn’t actually realize it, it was normal to me, but my parents realized it when I fastened my little sister’s sleeves together when she wouldn’t stop hitting me.’

Interviewer: *laughing* ‘Really? How old were you?’

Ada: ‘Four. Edyna is two years younger than me and… well she can be a bit naughty at times.’

Interviewer: ‘You’re rather young to be in such a position at the castle, how did you get noticed? And if you don’t mind my asking, how old are you?’

Ada: ‘I’m eighteen. I was noticed by one of the Lady’s of the House Aly’dun and she mentioned it to the Archduchess who sent a personal invitation to me. I visited the castle and showed what I could do and the Archduchess employed me as the castle’s fabricer.’

Interviewer: ‘That must have been a daunting visit!’

Ada: ‘It was. My hands shook the whole time. But the piece I created turned out beautifully. I believe it’s now on display in the local town.’

Interviewer: ‘How wonderful! Now, there’s an interesting rumor abound that the Archduchess had the Griffon Guard collect four women from the North. Do you know anything about that?’

Ada: *blushing* ‘Ahhh… Well… I’m not sure what I’m entitled to say. But I can say I have met four new girls and they’re lovely.’
Interviewer: ‘Do you know why they’ve been summoned?’

Ada: *shakes head* ‘No. No, I don’t. I think they were lost.’
Interviewer: ‘Thank you for your time today, Ada, it’s been a pleasure meeting you. I hope we get to see some more of your beautiful work soon!’ 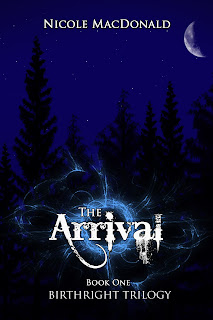 The Arrival
by Nicole MacDonald
The BirthRight Trilogy, Book 1

Buy Links:  Free for a Period of Time at all of the Following Retailers


Four friends in the midst of a man drought cast a love spell on a whim, unexpectedly landing them on another planet.

On a foreign and often hostile world, love teeters on the horizon while the threat of civil war looms thanks to the girls' surprising gifts. Will the girls master these gifts in time to survive a war in which not only are they the ultimate weapons, but also the ultimate prize?

“The track quickly led to the river and I dropped my stuff near the edge. Kneeling, I dunked my top in the water and scrubbed it full of soap. I heard some splashes and smiled.

Audi’s such a water baby and as long as it was by choice, rather than me giving her a bath, she would swim anywhere. It sounds like she's having fun. I swished the top under the water, rinsing the soap out. The splashes sounded closer and I glanced up.

Alek stood in the middle of the river, the water lapping mid thigh on him.

He was magnificent. The water cascaded down his taut, muscular body, his blue black hair shoved back out of his eyes and his white essentially see-through undergarment.

My jaw dropped. I don’t think I’d ever seen such a fantastic specimen in real life before.

Alek was surprised to see Catherine at the waters edge. He’d thought all the women would have slept for a few more hours, at least. About to call out a greeting, he stopped when he noticed her slack jawed expression.

It was at that point I could suddenly make out the rational voice in my head.

It was screaming; STOP STARING, HE’S LOOKING RIGHT AT YOU.

My eyes jerked up to dark blue ones, regarding me in amusement, one eyebrow arched.

And in the manner of any intelligent, attractive, level headed, sensible female who had been caught out…

I promptly blushed beetroot, muttered something unintelligent, snatched my things and bolted for the tent. I hurtled past Daron who was headed toward the river. “ 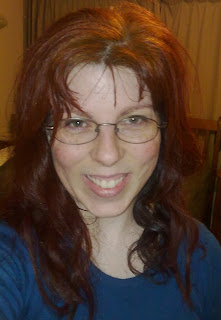 Nicole MacDonald is the Independent author of The Arrival, and, Awakening, the first two books in the BirthRight Trilogy. Writing had never been a lifelong dream for her until she began The Arrival, but it now is an all-consuming passion.

A proud Kiwi (New Zealander) Nicole dreams that one day Peter Jackson will be in touch to option the film rights for the BirthRight Trilogy. When she's not daydreaming about that she's working on book three in the trilogy - Feel the Burn, available December 2012 - and planning future works.

Don't forget to leave a comment or question below for Nicole to let her know you stopped by.  Nicole will be awarding a $50.00 gift card – Amazon or Barnes & Noble, winners choice, to a randomly drawn commenter during the tour. You can follow her tour stops here, the more often you comment, the better your odds of winning.
Posted by Maria D. at 12:30 AM