Review Tour & Giveaway - Fall Into You by Roni Loren 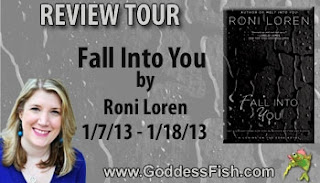 Welcome to my stop on Roni Loren's Fall Into You Review tour.  Please make sure to leave a comment or question below for Roni to let her know you stopped by.  Roni will be awarding signed print copies of Crash Into You and Melt Into You, and a Kindle or Nook version of Still Into You(U.S. and Canada only) to a randomly drawn commenter during the tour.  You can follow all of her tour stops here, the  more often you comment, the better your odds of winning. 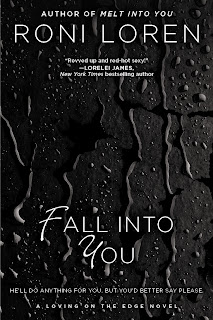 Fall Into You
by Roni Loren
Loving on the Edge, Book 3

When tomboy sports reporter Charli Beaumonde loses a dream TV job because she’s not girly enough for primetime, she’s determined to land a big scoop and prove her boss made a mistake. But when she gets too close to a football scandal and finds her life threatened, Charli accepts an offer from family friend Grant Waters to hide out at his place—even if Grant predicts nothing but trouble from his buddy’s hard-headed, uncompromising, irrepressible, younger sister. There’s one more problem…

His expression remained placid, but the flare in his eyes said he was anything but. “Finish your sentence.”

She cringed but forced her vocal cords to work. “The thought made me mad. And jealous.”

He seemed to consider that for a moment, his head tilting ever so slightly. “Interesting. Kneel down.”

She responded in an instant and attempted to rock down gracefully. Her knees hit the polished wood floors with barely a sound. Yeah, buddy. She fought back a proud smile.

He nodded in approval as he walked a slow circle around her, like an animal sizing up its prey. He stopped in front of her again. “Very nice. Get used to holding that kneel.”

He stepped back a few feet but continued to watch her as he slipped his suit coat off his shoulders—a slow, fluid motion of a man in no hurry. He folded the jacket and laid it neatly over the arm of the couch, smoothing out an errant wrinkle. Next, he pulled at the knot on his tie, the soft silk-against-silk sound the only noise in the room. His movements stayed methodical, deliberate—his stare unyielding. With each removed item, Charli found her heartbeat ticking up a notch. She moistened her lips. Was he going to take off everything? Was she finally going to get to see all of him, touch him?

He ran the silk tie over his palm with an oh-the-things-I-could- do look on his face, and she could almost feel its smoothness against her own skin. What would it feel like against her wrists, her ankles? But he laid it across his suit coat, leaving it unused. His long fingers went to his cuff links and he unfastened the buttons at his wrists. Clink. Clink. The cuff links hit the glass side table, startling Charli.

Grant gave her a wicked smile as he rolled the sleeves of his white dress shirt up his forearms. “Am I making you nervous, Charlotte?”

“Smart girl. Your instincts are better than your brother gives you credit for.” He walked over to her, the tips of his shined shoes almost touching her knees. His hand cupped her chin, forcing her face upward. “Though I didn’t appreciate your defiance earlier, your jealousy pleases me. I like that you want to be the only one serving me.”

He ran the pad of this thumb over her mouth, and without pausing to think, she parted her lips and sucked. The dark blue in his eyes went almost black as he let her lick his salty skin. Seeing his response sent a hot rush through her, an ache. Knowing she could do that to him with such a simple act felt . . . invigorating.

He brushed her hair away from her face with gentle fingers. “This is only supposed to be an intro training. But you’re making it very hard for me to restrain myself, Charlotte, especially when you look at me like that.” 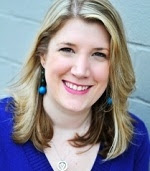 Roni wrote her first romance novel at age fifteen when she discovered writing about boys was way easier than actually talking to them. Since then, her flirting skills haven’t improved, but she likes to think her storytelling ability has.

Though she’ll forever be a New Orleans girl at heart, she now lives in Dallas with her husband and son. If she’s not working on her latest sexy story, you can find her reading, watching reality television, or indulging in her unhealthy addiction to rockstars, er, rock concerts. Yeah, that's it.

She is the National Bestselling author of The Loving on the Edge series from Berkley Heat.

Not realizing this was the third book in an ongoing series, Loving on the Edge, I picked up Fall Into You by Roni Loren, a new to me author.  I was pleasantly surprised by how easily I was able to get invested in the characters and how much I enjoyed Ms. Loren's voice as a writer.  Filled with likable characters, good dialogue and just the right touch of suspense, I found myself glued to the pages of this book.

Charli Beaumonde can't believe she's lost her chance at a TV job as a sports reporter because her boss doesn't believe she's "girly" enough for the camera.  A tomboy at heart, Charli's always known she's not as attractive as most girls but figured her talent would more than make up for what she lacks in looks.  Determined to prove her boss wrong, Charli begins investigating a sports scandal which turns dangerous.  While not a woman who runs from adversity easily, when her life is threatened and she needs a place to hide out, Charli finds herself relying on Grant Waters, her brother's best friend.

The scenes between Charli and Grant are full of incredibly chemistry and smoking hot sex.  As Grant teaches Charli how to be the perfect submissive, she makes him question his decision to go through life all alone.  Ms. Loren did a great job developing both Charli and Grant's characters and their emotional relationship.  While Grant helps Charli deal with her issues of self doubt, Charli helps Grant face what he really wants.

Don't forget to leave a comment or question below for Roni to let her know you stopped by.  Roni will be awarding signed print copies of Crash Into You and Melt Into You, and a Kindle or Nook version of Still Into You(U.S. and Canada only) to a randomly drawn commenter during the tour.  You can follow all of her tour stops here, the  more often you comment, the better your odds of winning.
Posted by Maria D. at 1:00 AM