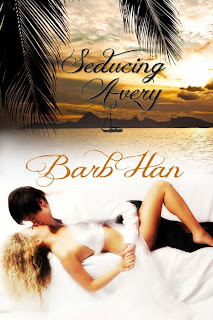 Avery McAdams believes in order to truly be herself she needs to keep her head down, her guard up and her focus on her career. Until she’s hired by sexy, charismatic Ryker Li to pull off the event of the century, and he shows up personally to convince her to handle his next party. When she meets him face-to-face, she realizes a piece of her wants him to see her as attractive, which goes against everything she’s convinced herself she believes.

Rich, powerful Ryker has made an art form of getting what he wants, when he wants it, and then moving on. But something about Avery makes him want to stick around.

When he finds everything he never dreamed to look for in a woman, can the billionaire playboy commit to the biggest deal of all? Or will a lifetime of mistrust and suspicion turn them forever into rivals?

According to a song, "Love is the golden crown that makes a man a king", but if you're like the characters in Barb Han's Seducing Avery, it's the one thing you're missing in life and are sure you can't trust.  Ms. Han's tale proves once again that love has the power to transform even the most cynical, flawed, and loneliest rich man or woman into someone with hope and trust.  With a quickly moving pace, I was entertained by this story for the afternoon.

Event planner Avery McAdams knows what the rich and famous are like - she's not even using her real family name because she wants to prove she can make it on her own.  Avoiding romance with rich men is easy, all she has to do is remember how she's been betrayed in the past.  She's absolutely not interested in getting involved, or even working again for Ryker Li, a super successful businessman she's just completed a charity even for.

Trying to keep his business and personal lives separate from each other, Ryker Li is surprised when a new and up and coming event planner makes his charity event more successful than it's ever been.  Catching her sleeping in her office was an accident; wanting to get to know her better is unexpected.  Especially when she makes it clear she doesn't want anything further to do with him on a business or personal level.  Used to getting what he wants, Ryker refuses to take no for an answer.

The scenes between Avery and Ryker are full of smoldering chemistry and fast, witty dialogue.  They have both been burned emotionally by their pasts and neither one considers love something they want in their lives.  They've both seen the damage love does when betrayal is involved.  Ms. Han did a good job introducing us to Avery and Ryker and letting us get to know their back stories as they learned to share them with each other.  The only problem I had with the story was that it was difficult to get invested in either character because they spent so much time internally arguing with themselves about whether or not they would become intimate (they did) and get emotionally involved, that I wanted to slap them both upside the head and tell them to "knock it off already".

Will Avery realize she can have both love and a successful business?  Will Ryker be able to let go of the hurt from his past to see that Avery is his future?  You'll have to read Seducing Avery to find out.  I really enjoyed this debut release from Ms. Han and look forward to reading more of her work.

FTC Disclosure:  I received a complimentary copy of this book as a part of a book tour in exchange for a fair and honest review.
Posted by Maria D. at 9:58 PM