Spotlight & Giveaway for A Bar in Paris by Imogene Nix


A Bar in Paris by Imogene Nix

Process Vs Passion by Imogene Nix

Gah... I promised a guest post and time and life keep getting in my way J  But that's an authors life.

Forget the high profile feted ideas you might have (a la Castle!) Most of us are wives, mothers and fully employed in life on a day-to-day basis...

But, back to the matter at hand, something I find hard because daily life keep getting in my way, this morning.  Taking the kids to school, feeding the animals, making the bed...

But life is just one big process after another.  Sure we get passion, but it’s the day to day stuff that can clog the arteries of a writer.

It’s a constant battle to make sure books featuring intimate scenes are passionate, exciting and worth reading. And I know many others who suffer from the same P.V.P.  (Process Versus Passion) syndrome as I do.  And it’s something I learned right back at the beginning.  Sometimes when a writer is first starting out, it’s easy to be so caught up in the process of writing the scenes that they fail to include the passion and focus instead on the process of part A fits into part B.

What do I mean? Let me show you.

I watched as he started to strip.

Now I read that and go “Meh!” The words are there... The process is there but I’m not feeling any passion...

He smiled and reached for his shirt, unbuttoning it as I watched, then it was gone and his bronzed chest was bared to my hungry gaze. My panties were damp, my nipples hard buds of need, and I shivered as electrical impulses flashed on and off through my entire being.

This time I’m feeling the passion.

How did I change it to include the passion? That’s not quite as simple as knowing which words to add... but it’s a matter of painting the world around them, concentrating on the emotions and feelings. It’s about making the reader able to feel the actions and emotions the characters are experiencing.

Have I read stories with process and no passion? I sure have. But you know the problem with that? I walk away feeling dissatisfied... like I’ve waited for my caffeine hit, only to get a... Decaf!  Urgh! (See?  Can’t think of anything worse – well so says me as I sit here with my cappuccino in hand.)

Anyway, to be honest, I did think that at some point writing these scenes would get easier.  That I’d be able to scroll them off... instead I’m just as concerned as my first.  Why? Because now I have the added concern of ensuring they are fresh. Sigh.

So far, I haven’t found a cure for PVP. If you do, be sure to tell me, right? 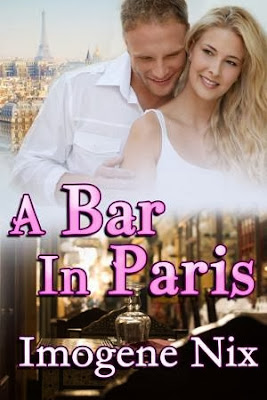 Turning 30? All alone? A commitment-free weekend in Paris should help…shouldn't it?

What does a single woman do when she's turning thirty? She takes a weekend trip to Paris looking for commitment-free sex. Or that's what Davina Chandler does, anyway.

Enter Johnathon, a tall, charming Englishman. How can she possibly resist his magnetism and that sexy dimple?

What starts out as a lark quickly becomes so much more, but can one weekend turn into a lifetime? And will a lie of omission bring everything into jeopardy?

The waiter smiled and I sighed. "Time to go." As I prepared to rise, gripping my bag in my hand, the bell above the door rang and I watched with interest as the sexiest man I'd ever seen entered. The cool blonde on his arm was scowling and he pried her fingers from his arm then walked away. For a moment, she wobbled on her stilettos before she sneered in her super chic French way only they can pull off and stalked out the door. It slammed so hard the panes of glass shuddered.

The man scowled, but to be honest, it didn't hurt at all. He was tall and well built. Blond hair with gray eyes.

My mind screamed that this man could probably satisfy my needs. He didn't appear even slightly inebriated and he was obviously single now, if that little carry-on was to go by. Perhaps this was my chance? I smoothed down my black dress, making sure my cleavage was just peeking out, then I sucked in a deep, deep breath and stood, hoping to catch his eye.

I watched the man stalk to the bar and order in perfect English-accented French. "Une bière, s'il vous plait."

My toes curled at his voice and the waiter hurried to do his bidding. Mr. Sexy's voice was cultured and deep. I like voices, particularly men's voices. They can make me go gooey at the knees, and this one warmed my insides to the consistency of thick, warm honey. And I knew he was the one I wanted to be with all night long.

The server handed over a bottle of beer and a glass, but Mr. Sexy looked at the bottle, grimaced, and then took a long pull.

The other men at the bar started talking in low voices, putting aside newspapers. They paid their money and left. I didn't want to think it was because of the dangerous aura surrounding the man. It was, after all, three in the morning. No, there had to be something else. But I was sure it wasn't the time to ask these questions.

The small bar was quiet now as I was waiting alone with the mystery man. The waiter disappeared to the back. Obviously, with only two patrons left, he could do other things.

I sucked in my confidence, folded it around me like a coat, and approached the man. "Hi. Mind if I join you?"

He grinned and gestured to the seat beside him. I slipped onto the small stool, perched uncertainly. Then I wiggled my bum a little, thrust out my chest, and gave him my very best come-on smile.

"Looking for a hook up, are you?" His voice caused a curl of heat to gather deep inside me.

I nodded slowly. Better to be honest from the start, I thought. I didn't have time to say a word. The next thing I knew, he had me thrust against the bar, his lips on mine and his tongue halfway down my throat. But man, what a tongue it was.

He played me like a violin until he lifted his head, casting a wicked smile in my direction. "Your hotel or mine?"

"Umm, yours." Right now, I felt the rosy glow of arousal roaring through me. Sexy and quick to catch on. Yep, I was sure this guy was a winner.

About the Author:
Imogene is a mother of two, compulsive reader, and bookstore owner. She lives in regional Queensland, Australia with her husband, two daughters, dog, cats, guinea pigs, and chooks. She has a particular fondness for vampires, star ship captains, and things that go bump in the night (especially vampire types).

Imogene has tried many varied roles in her working life including kindergarten assistant, teacher, principal, and kindergarten and child care director, but rates owning a bookstore and writing her own novels as the absolute highlight.

In her mother and wife alter ego, she has travelled widely and lived in some very unique places including Far Western Queensland, Cape York, and even Tasmania. She loves to travel and rates China and Hong Kong among her favorite destinations.

She blames Star Trek Voyager, Firefly, and the works of Alexander Kent for her interest in naval activities and later space fleet interest.