Tales of the Were Series Spotlight 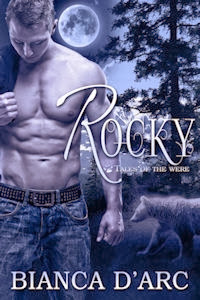 Tales of the Were: Rocky

On the run from her husband's killers, there is only one man who can help her now... her Rock.

Maggie is on the run from those who killed her husband nine months ago. She knows the only one who can help her is Rocco, a grizzly shifter she knew in her youth. She arrives on his doorstep in labor with twins. Magical, shapeshifting, bear cub twins destined to lead the next generation of werecreatures in North America.

Rocky is devastated by the news of his Clan brother's death, but he cannot deny the attraction that has never waned for the small human woman who stole his heart a long time ago. Rocky absented himself from her life when she chose to marry his childhood friend, but the years haven't changed the way he feels for her.

And now there are two young lives to protect. Rocky will do everything in his power to end the threat to the small family and claim them for himself. He knows he is the perfect Alpha to teach the cubs as they grow into their power... if their mother will let him love her as he has always longed to do. 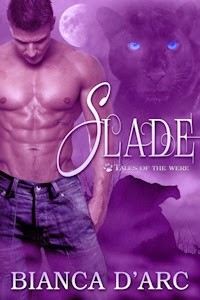 Tales of the Were: Slade

The fate of all shifters rests on his broad shoulders, but all he can think of is her.

Slade is a mystery. A warrior and spy who serves two masters - those in the human world and the Lords of the Were. They've sent him to Nevada to track a brutal murderer before the existence of all shifters is revealed to a world not ready to know.

Kate is a priestess serving the Goddess and the large community of shifters that have gathered around the Redstone cougars. When their matriarch is murdered and the scene poluted by dark magics, she knows she must help the enigmatic man sent to track the killer.

Together, Slade and Kate find not one but two evil mages that they alone can neutralize. It's a tricky situation because Slade finds it hard to keep his hands off his sexy new partner, the cougars are out for blood, and the killers have an even more sinister plan in mind.

Can Kate somehow keep her hands to herself when the most attractive man she's ever met makes her want to throw caution to the wind? And can Slade do his job and save the situation when he's finally found a woman who can make him purr? 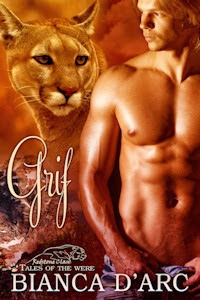 Tales of the Were: Grif
Redstone Clan #1

Griffon Redstone is the eldest of five brothers and the leader of one of the most influential shifter Clans in North America. He seeks solace in the mountains, away from the horrific events of the past months, for both himself and his young sister. The deaths of their older sister and mother have hit them both very hard.

Lindsey Tate is human, but very aware of the werewolf Pack that lives near her grandfather's old cabin. She's come to right a wrong her grandfather committed against the Pack and salvage what's left of her family's honor - if the wolves will let her. Mostly, they seem intent on running her out of town on a rail.

But the golden haired stranger, Grif, comes to her rescue more than once. He stands up for her against the wolf Pack and then helps her fix the old generator at the cabin, making it habitable for her while she completes her task. He's friendly and all too attractive, but she has a job to do, regardless of the cost to herself or her budding relationship with the local handyman.

When she performs the ceremony she expects will end in her death, the shifter deity has other ideas and turns the tables on them all. Grif's dual nature is revealed and Lindsey learns there is much more going on than she thought.
Thrown together by fate, neither of them can deny the deep and true attraction between them. They come together, but in the end will an old enemy rip them apart?

Warning: Cats are frisky and they get up to all sorts of naughtiness, including a frenzy-induced multi-partner situation that might be a little intense for some readers. You have been warned. 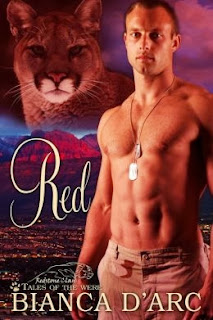 Tales of the Were: Red
Redstone Clan #2

A water nymph and a werecougar meet in a bar fight... No joke.

Steve Redstone agrees to keep an eye on his friend's little sister while she's partying in Las Vegas. He's happy to do the favor for an old Army buddy. What he doesn't expect is the wild woman who heats his blood and attracts too much attention from Others in the area.

Steve ends up defending her honor, breaking his cover and seducing the woman all within hours of meeting her, but he's helpless to resist her. She is his mate and that startling fact is going to open up a whole can of worms with her, her brother and the rest of the Redstone Clan.

Trisha's had to hide her special abilities most of her life, but with her brother's Army buddy - the guy they call Red - she's finally free to be herself. He calls to her in a way she's never experienced before and while bad guys keep trying to abduct her, he's her safe port in the storm. But can such dangerous beginnings lead to a life-long love? 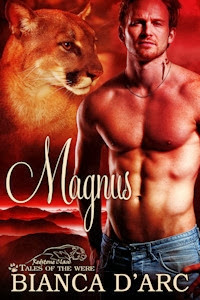 Tales of the Were: Magnus
Redstone Clan #3
COMING EARLY 2014

Magnus Redstone is the middle of five brothers. As a result, he's always had a little bit of a hard time forging his own identity. While he excels at martial arts, he didn't want to be a soldier like Grif and Steve, his two older brothers. He also doesn't have time for practical jokes like the younger two, Bob and Matt. No, Mag is probably the most serious of the brothers and he always has been. The only real moment when he threw caution to the wind was when he met one very special lady. A lady with fangs...

Additional Series Info:
The Tales of the Were includes:
Main series: Lords of the Were, Inferno
The Others: Rocky, Slade
Redstone Clan: Grif, Red, and three more coming soon!

Bianca D'Arc has run a laboratory, climbed the corporate ladder in the shark-infested streets of lower Manhattan, studied and taught martial arts, and earned the right to put a whole bunch of letters after her name, but she’s always enjoyed writing more than any of her other pursuits. She grew up and still lives on Long Island, where she keeps busy with an extensive garden, several aquariums full of very demanding fish, and writing her favorite genres of paranormal, fantasy and sci-fi romance.

You can usually find Bianca on Facebook (https://www.facebook.com/BiancaDArcAuthor), Twitter (https://twitter.com/biancadarc) or you can find out more about her books on Goodreads (https://www.goodreads.com/author/show/38820.Bianca_D_Arc) or her website - WWW.BIANCADARC.COM. 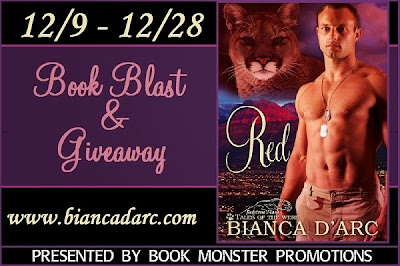 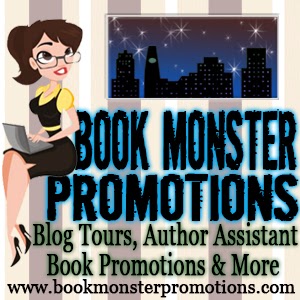 12/9 For the Love of Bookends
http://loveofbookends.blogspot.com/

12/17 Miscellaneous Thoughts of a Bookaholic
http://miscellaneousthoughtsofabookaholic.blogspot.com

12/18 Queen of the Night Reviews
http://queenofthenightreviews.blogspot.com

12/19 Why I Can't Stop Reading
http://whyicantstopreading.wordpress.com

12/23 Musings From An Addicted Reader
http://musingsfromanaddictedreader.blogspot.com

12/28 Delphina Reads Too Much
http://delphinareadstoomuch.com

12/28 Wicked Readings by Tawania
https://wickedreadingsbytawania.blogspot.com
Posted by Maria D. at 12:30 AM