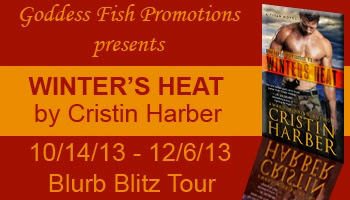 Join author Cristin Harber on her Blurb Blitz Tour for Winters Heat, presented by Goddess Fish Promotions from October 14 – December 6, 2013.  Please leave a comment or question for Cristin to let her know you stopped by.  Cristin will be awarding a $25 GC to Victoria’s Secret, and gifted e-copies of the five titles in the series (starting w/ Winters Heat. Three novels and two novellas) to one randomly drawn commenter during this tour AND the Virtual Super Book Blast tour.  Don't forget to check out the other tour stops here, and stay tuned for my review later this week. 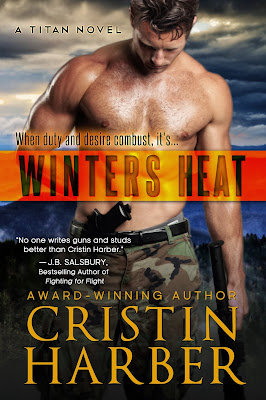 After putting her life on the line to protect classified intelligence, military psychologist Mia Kensington is on a cross-country road trip from hell with an intrusive save-the-day hero. Uninterested in his white knight act, she’d rather take her chances without the ruggedly handsome, cold-blooded operative who boasts an alpha complex and too many guns.

Colby Winters, an elite member of The Titan Group, has a single objective on his black ops mission: recover a document important to national security. It was supposed to be an easy in-and-out operation. But now, by any means necessary becomes a survival mantra when he faces off with a stunning woman he can’t leave behind.

When Titan’s safe houses are compromised, Colby stashes Mia at his home, exposing his secret—he’s the adoptive father of an orphaned baby girl. Too soon, danger arrives and Mia lands in the hands of a sadistic cartel king with a taste for torture. As hours bleed into fear-drenched days, Colby races across the globe and through a firestorm of bullets to save the woman he can’t live without.

First Kiss Between Colby Winters and Mia Kensington. They’re in a truck, driving down a deserted highway after a gunfight.

She smelled like vanilla and sugar, even after the hell she’d been through that day. Her soft hair brushed up against his bare bicep. Unsettled need prickled down his neck. His throat tightened, and fire ran to his groin.

“Mia…” Distraction and anticipation stole words from his lips.

His heart pounded loud in his chest, fighting for his attention. With each flutter of her eyelashes and innocent movement against his skin, his tension spiked. It was shocking. He was on the job. There was no time for distraction. Losing control was unheard of. Unacceptable.

His arm was cemented around her shoulder, and it wasn’t moving. He stared as the broken white lines on the highway passed in quick revolutions, one right after another. The hum of the truck’s engine poked at his concentration.

He needed to get out of this truck. He needed cool, fresh air to cover him. Right now. Deep, mind-clearing breaths were in order as soon as possible. Anything to get his disciplined mind back to what it did best—analyze, act, accomplish.

Winters made a sharp exit off the highway onto an unlit ramp. He jammed on the brakes. Gravel spit from under the truck. The back end skidded and fishtailed before it came to a stop. His heart thumped. His throat tightened. The faint scent of burned rubber filtered into the pickup cab.

Oh, what the hell. No way was he getting out of this truck.

As fast as he pulled off the road, he brought her close to his face, and without even a second to hover over her, he crushed his lips onto hers. Her tense mouth gasped a breath, then melted. The hot caress of her tongue sent explosions from his chest to the palms of his hands. The pounding in his heart didn’t get any better. It only pushed his racing pulse faster, making it gallop wild, as intoxicating rockets flamed inside him.

Insanity. She was delicious insanity.

In between breathless pants, wicked want fired. Her lips were full. Her kiss was better than he expected, and hell, he expected a whole lot. She stoked him faster than he could ever remember. A kiss unlike any other kiss. There was no denying that.

He knotted a hand in her hair, held her to him, and devoured her. The press of her silken flesh made him hunger for more. His breathing deteriorated into a desperate rasp of torture. With each inhalation, he smelled, tasted, and consumed feminine beauty. This angel was a vixen in disguise, and God help him, he wanted her.

Her small hands wrapped into his T-shirt, then she stroked his stomach, flexing her fingertips against the fabric and straining against him. He dropped his lips to her neck, and she moaned. That perfect purr fanned his desperation. Her goose bumps flashed under his tongue’s caress, and she shuddered with each whipping kiss.

She tasted of sweat and tear gas, of soft woman, and carnal ambition. There wasn’t a timid thing about Mia. Who was he to assume what she wanted? To think she needed soothing and caring? It seemed all she needed was him. Hard. Tough. Possessive. 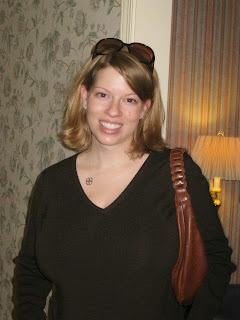 MOM. WIFE. AUTHOR.
Lover of all things sexy and happily ever after.

I live outside Washington, DC with my family: my husband (who doesn’t mind my collection of book boyfriends), an independent toddler, and an English bulldog named Britta who loves to be a conversation piece. Oh, we have a baby on the way—arriving about the same time as WINTERS HEAT debuts!

I love southern food, listen to country music, am always too hot or too cold, and spend hours reading and writing. I cheer on my University of Louisville Cardinals-GO CARDS! When I’m not pregnant (or nursing), I like a little bourbon or sweet wine. Pregnant or not, I love a lot of chocolate.

I can’t save the world, so instead, I write about those that do. There’s a special place in my heart for those who keep us safe. My Titan series debuts this fall with five titles available in 2013: WINTERS HEAT, GARRISON’S CREED, WESTIN’S CHASE, CHASED, and GAMBLED. 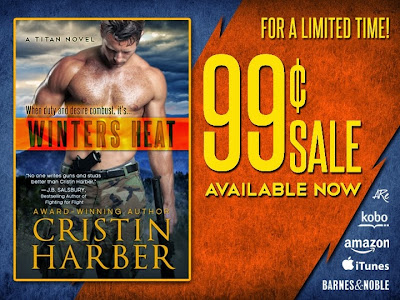 Don't forget to leave a comment or question for Cristin to let her know you stopped by.  Cristin will be awarding a $25 GC to Victoria’s Secret, and gifted e-copies of the five titles in the series (starting w/ Winters Heat. Three novels and two novellas) to one randomly drawn commenter during this tour AND the Virtual Super Book Blast tour.  You can check out the other tour stops here.