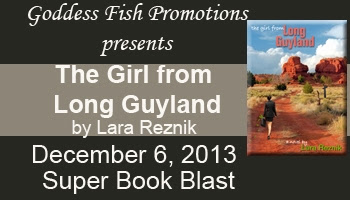 Join author Lara Reznik for Super Book Blast for The Girl from Long Guyland, presented by Goddess Fish Promotions on December 6, 2013.  Please leave a comment or question for Lara to let her know you stopped by.  Lara will be awarding a $50 Amazon gift card to one randomly drawn commenter at the end of the book blast, please leave your email address with your comment in case she needs to contact you.  You can follow the rest of the tour here, the more stops you visit, the better your odds of winning. *Breaking News......Book on Sale for $.99 on December 7, 2013 only* 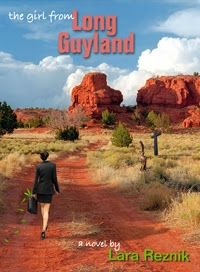 The Girl from Long Guyland
By Lara Reznik

Laila Levin enjoys a successful marriage and a thriving career as an I.T. executive in Austin, Texas, but she can't quite shake her lifelong sense of not truly belonging anywhere.

When her company announces a major layoff, Laila finds herself caught between an unscrupulous CEO and her promiscuous boss. Then news of her college roommate's suicide stirs up a dark secret involving three devious friends from her past. One has betrayed a vow, another wants to rekindle their romance, and the third is out for revenge.

Suddenly for Laila, it's 1969 again. She's only seventeen, and she's left her sheltered home in Long Island for college in Connecticut. Amid protests of the Vietnam War, she's tempted by the sex, drugs, and rock 'n' roll that rule her generation. Laila gets swept up in a deceptive love triangle with two older locals and initiated into their unethical hippie family. Too late she realizes her search to belong has led to tragedy.

Laila must now juggle the demands of her perplexed husband and her baby boomer past forcing her to make choices that endanger her survival and challenge her conscience.

She learns that the lines between right and wrong are often blurred, and sometimes you have to risk everything to be true to yourself.

We both rise and hug. The cigarettes and beer on his breath jet me back in time to Bridgeport. I want to scream at him but suppress my anger. I remind myself it’s important I stay calm and collected.
“Ben was right. You look awesome,” he says.
He’s definitely changed a lot. The cute blonde guy I remember has vanished. His face has the bloated look of an alcoholic with his veiny red nose and blanched skin. In comparison, Ben looks much better for the wear.
He gestures to the waitress who drops off menus and a Budweiser for him. I order a glass of Chardonnay.
“So, tell me about yourself, Laila,” he says.
Should I commence with what a creep I think he was for deserting Katie and me thousands of miles away from home? Or how furious I am that he broke the pact and deflected Juanita Bonita’s investigation from him to me?
No, best to let the past go and mine as much information as I can about his conversations with Juanita. If it means acting friendly, then so be it. I’m a lot older and wiser now and can play his game. While I don’t like it one bit, I’ll do what it takes to survive.

I provide a brief synopsis about Ed, the boys, and my I.T. career, ending with the recent visit from our new board member. The part about Ivy is a test to see how he responds. 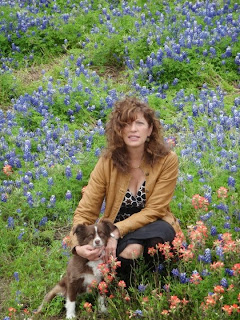 Lara Reznik grew up on Long Island but escaped to New Mexico in 1970 in a Karmann Ghia that she and her boyfriend jump-started cross-country. As an English major at the University of New Mexico, Lara studied under esteemed authors Rudolfo Anaya and the late Tony Hillerman. She also attended a summer program at the prestigious Iowa Writers Workshop.
Ambidextrous from birth, Lara preferred her right-brained creative side, but discovered she could make a better living with her left-brain skills, so entered the I.T. field in 1985.
Lara published her first novel, The Girl From Long Guyland in November 2012. The novel ranked #1 during its recent Amazon Kindle promotion and has over 115,000 Kindle downloads. In addition to her novels, Lara has written and optioned three screenplays that have garnered semifinalist and finalist wins in the Austin Heart of Film, Southwest Writers, TV Writer, Chesterfield and Writer's Digest contests. Currently, Lara is working on a new novel based on her screenplay, The M&M Boys.

Don't forget to leave a comment or question for Lara to let her know you stopped by.  Lara will be awarding a $50 Amazon gift card to one randomly drawn commenter at the end of the book blast, please leave your email address with your comment in case she needs to contact you.  You can follow the rest of the tour here, the more stops you visit, the better your odds of winning.
Posted by Maria D. at 1:00 AM