Virtual Tour & #Giveaway for The Lair by A.B. Michaels

Welcome to my stop on the Virtual Tour, presented by Tasty Book Tours, for The Lair by A.B. Michaels.  Please leave a comment or question for A.B. to let her know you stopped by.  You can enter her Tour Wide Giveaway, where A.B. will give a
$25.00 eGift Card to the winner’s choice of Book Retailer (Amazon, B&N or iTunes) by filling out the Rafflecopter form below. The Lair follows on the heels of Sinner’s Grove, a contemporary suspense novel centered around the fictional artists’ retreat on the northern California coast known as “The Grove.”

Dani Dunn, the local innkeeper, has just learned of her famous father’s death and must travel back to her home country of Italy to attend the funeral. To say she’s not looking forward to it is an understatement. In fact, she’s petrified. The estate she grew up in holds terrifying memories that she knows she’ll have to confront if she’s ever to get on with her life.

Complicating matters is the fact that her flirtatious friend, Detective Gabe de la Torre, is coming along for the ride – without being asked. However, as Dani discovers the true evil that awaits her, Gabe proves he’s much more than a friend – he’s a sworn protector who may lose his own life in the process of saving hers.

* Author's Note:  THE LAIR deals with a very real, but sensitive subject, human trafficking.  It may be disturbing to some readers.

“You are absolutely getting off in Frankfurt. You are not going to follow me all the way to Milan!” Daniela Dunn stood in the aisle of the rapidly filling 747, an oversized carry-on bag slung over her shoulder. She leaned over and hissed the words at the tall, raven-haired detective sitting in the aisle seat of row twenty-nine.

Gabriele de la Torre—Gabe to his friends—didn’t say a word. He simply smiled and stretched out his long, muscular legs, obviously settling in for the transoceanic flight.

“What, you’re going to ignore me now?” she said. “After I told you and told you—”
“Is there a problem, ma’am?” A very attractive blond flight attendant paused while checking the overhead bins, glanced at Dani, and smiled at Gabe as if he’d just made People Magazine’s “Sexiest Man Alive.” Dani glared at him before mumbling, “No, I … uh …”

The attendant glanced at Dani’s boarding pass. “You’re back in row thirty-seven, seat B. That’s—”

“I know which seat I’m in,” Dani interrupted.

The attendant turned crisp as a Granny Smith apple. “If there’s no problem, I’ll have to ask you to please take your seat. You’re holding up other passengers who are trying to get settled. We have a very full flight.”

Gabe sent Dani a patronizing look before addressing the attendant. “I hope we don’t wear you out,” he said with a melt-in-your-mouth smile—the kind of smile Dani wanted to wipe right off his face.

The attendant matched him wattage for wattage. “We’re here to please,” she chirped before stepping into the next row to allow Dani to pass.

“I’ll talk to you later,” Dani muttered as she made her way back to seat thirty-seven B, bumping her bag into several seated passengers along the way. “Excuse me,” she said. “Sorry … Pardon me.” She found her row and wriggled between a gawky teenage boy wearing enormous headphones while staring out the window, and a middle-aged man with perfectly cut hair wearing a Bulgari wristwatch.  She learned shortly after takeoff that he was an Italian banker who traveled a lot and was more than eager to “practice my Eeenglish” over pasta and a fine chianti. In fact, since Dani was una bella donna di mondo, would she be available the next time he was in San Francisco on business? He could text her when he arrived.

It will be a cold day in hell before this “woman of the world” hooks up with you, creep. “I’m sorry, I don’t text,” she lied. As she politely rebuffed him, Dani glanced down at the man’s hands. She could see the slightly pale circle where his wedding ring normally fit his tanned finger; no doubt he’d slip the ring back on just before he returned home to his wife. Yecch.

Weary of making chit chat with Don Juan, Dani pulled out her iPod and tried to distract herself. No such luck. She leaned over to peek down the aisle. Several rows ahead, her nemesis wore his own headphones, looking totally relaxed. His seat was tilted back and she could see that his thick black hair was showing no signs of thinning, damn him. His strong bronzed hand was drumming on the armrest. What was he listening to?

She thought of his hands, and how the backs of his fingers were sprinkled with tiny black hairs. His nails were blunt and clean, she knew, because she had served him so often at the restaurant. She wondered idly what those hands were capable of …

What? What did his hands have to do with the fact that he had no business being on this plane? 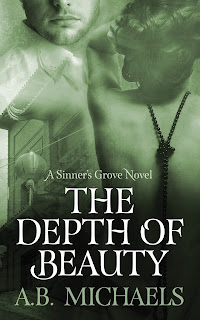 A.B. Michaels' dual-genre series "Sinner's Grove" follows the family, friends and associates connected to a world-famous artists' retreat on the California coast.  While The Lair is a contemporary novel of romantic suspense, The Depth of Beauty (soon to be published) is historical fiction, set at the turn of the twentieth century. Both San Francisco and the retreat of Sinner's Grove are featured in the story.

To read a free sample, visit https://kindlescout.amazon.com/p/3MTD47701RSD4.  If you enjoy the sample, please nominate it for Kindle Press; if it's accepted, you'll receive a free download of the entire book. 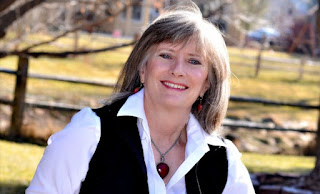 Born and raised in northern California, A.B. Michaels holds master's degrees in history and broadcasting, and worked for many years in the public relations and marketing fields. An avid quilter and bocce player, she currently lives in Boise, Idaho with her husband and two furry "sons" who don't seem to realize they're just dogs.