Book Blast & #Giveaway for Return of the Jerk by Andrea Simonne

Welcome to my stop on the Book Blast, presented by Goddess Fish Promotions, for The Return of the Jerk by Andrea Simonne.  Please leave a comment or question for Andrea to let her know you stopped by.  You can enter Andrea’s Tour Wide Giveaway, for a $25 Amazon/BN GC, by filling out the Rafflecopter form below.  You can also follow all of the stops on the tour by clicking on the banner above.  The more stops you visit, the better your odds of winning. 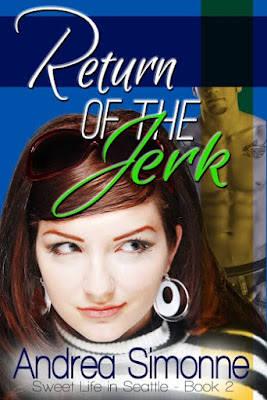 The Return of the Jerk
By Andrea Simonne
Sweet Life in Seattle, Book 2

Wedding cake baker Blair Thomas loves her life. Her business is thriving, her Seattle condo has a great view of the water, and her refurbished ‘65 convertible Mustang “Isadora” is the coolest car ever. She barely even thinks about that jerk she married five years ago. The one who abandoned her after four months of marriage. The one who left a note on her pillow saying, “See you later, babe.”

Seriously, who does that?

So what if she was once obsessively in love with him. He’s her best friend’s older brother and for years he barely even knew she was alive. He never loved her, and he only married her because of a drunken mistake. At least she’s over him.

The only problem is Blair never got around to divorcing him so technically they’re still married. And after five years of traveling the world—Nathan “Road” Church—has finally decided to come home. He arrived on Blair’s doorstep this morning, and now he’s in her bathroom taking a shower. The nerve of him! Oh, and did I mention he’s still hot? Blair doesn’t know what to do.

The jerk has returned.

Warning: Contains one sexy jerk, humorous situations, a heroine with obsessive compulsive disorder, cussing and swearing, steamy love scenes, and references to a part of the male anatomy that doesn’t crow like a rooster – but certainly rises in the early morning.

“You’re going to have to move to the couch now,” Blair says firmly. “You can’t sleep in here anymore.”

“Too tired, babe.” His eyes close.

Road shrugs. “So? Get in bed. Nobody’s stopping you.”

“What do you think is going to happen, princess?”

“Nothing is going to happen.”

His eyes open at that. “Then what are you afraid of?”

“I’m not afraid of anything.”

He smirks. “You did say you needed more sex. Maybe I’m the one who should be afraid here.”

He closes his eyes again, still smiling. “Unfortunately, I’m too beat with jet lag to help you out tonight. Maybe tomorrow, but only if you ask me nicely.”

She scoffs. “You’re so full of yourself.”

Blair studies him in the darkened room. His back is exposed, the white sheet draped across his middle. “You’re not naked under there, are you?” 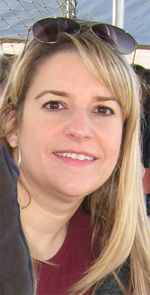 Andrea Simonne grew up as an army brat and discovered she had a talent for creating personas at each new school. The most memorable was a surfer chick named "Ace" who never touched a surf board in her life, but had an impressive collection of puka shell necklaces. Eventually she turned her imagination towards writing. Andrea still enjoys creating personas, though these days they occupy her books. She currently makes her home in the Pacific Northwest with her husband and two sons.