Virtual Tour & #Giveaway for Her Captain by Taryn Kincaid

Welcome to my stop on the Virtual Tour, presented by Goddess Fish Promotions, for Her Captain by Taryn Kincaid.  Please leave a comment or question for Taryn to let her know you stopped by.  You may enter her tour wide giveaway, where one (1) randomly chosen commenter will be awarded a $10 Amazon/BN GC, by filling out the Rafflecopter form below.  You may follow all of the stops on the tour by clicking on the banner above.  The more stops you visit, the better your chances of winning.

The hero, Capricorn and ex-Navy SEAL Slate Claybourne is determined, patient, responsible, self-reliant, loyal and steadfast. He’s the polar opposite of the heroine, Holly Harper, fiery and impulsive Aries.

Together they are a totally combustible combination. Slate and Holly discover they’re made for each other when they’re trapped in a rundown Pieberry Island inn during a raging nor’easter. The power goes off…but they light up the night together.

Here are some things to spike up the heat in your romance!


Add the sugar and water to a medium saucepan and place over medium heat. Stir until the sugar dissolves, then add the cranberries and ginger. Simmer the mixture until thick and syrupy, about 15 minutes. Stir occasionally to prevent the cranberries from foaming up, pressing the cranberries against the side of the pan to pop them.

Pour the cranberry mixture through a fine-mesh sieve and strain the liquid into a medium bowl. Press gently on the cranberries to extract more juice, but be warned that if you press too hard you may end up with more of a jelly than a syrup (still delicious!).

Refrigerate the syrup until cold; save the berries for another use.

Add 1 to 2 TBS of the cranberry syrup to each of 4 glasses, then add 1 1/2 oz. (1 shot) of rum to each glass. Stir vigorously to mix. Add a few ice cubes to each glass, then top off with 1/2 c. of sparkling cider. Garnish with sugared cranberries and serve immediately.

Recipe from Katie at the Kitchen Door

Place raspberries in a cocktail shaker; crush with a muddler. 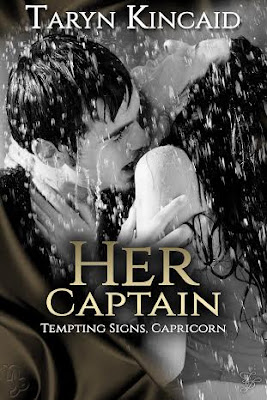 Capricorn Slate Claybourne, an ex-Seal and former sniper who has seen and done things in country that no man should endure, returns to his bucolic hometown on Pieberry  Island, desperate for the mundane, everyday routines he once wanted to escape.

A broken, soul-dead man unable to be around people, his body still a lethal weapon when his night terrors wake him from sleep, Slate’s failed to keep the promise he made to the commander who died in his arms: to look after the older man’s baby girl.

But animated Aries Holly Harper is not the pigtailed tot Slate expected her to be, when she lands on the island to take over the decrepit Pieberry House, determined to turn it into an inn for summer tourists, and even more determined to yank Slate back into the land of the living.

First she crashes into him at the island’s holiday Winter Festival, dumping a towering stack of pies at his feet, then she drags him off to a fortune teller against his better judgment. Except for the sizzling attraction smoldering between them, they’re incompatible in every way.

But when a furious December nor’easter traps them together at Pieberry House, will Slate and Holly overcome their pasts and discover they are two halves of a whole?

His square, sharp-edged jaw solidified like frozen iron, so rigid over his clenched teeth, a muscle ticked in his cheek. She almost laughed at his stunned expression, his cold, gunmetal- gray eyes unblinking, his brows zooming skyward like tarnished McDonald’s arches. Except that the face in question devastated her. If she’d thought him ruggedly handsome in the photos her dad had sent home, the giant, live-action figure totally stole her breath away, turned her knees to jelly, and melted her core. Hell, in another second, she’d be coughing and wheezing, trying to draw in a sip of the sustaining oxygen the hot-as-sin SEAL all but sucked out of the surrounding atmosphere. Jeez Louise. Raw, overpowering masculinity poured off him in waves.

Yet, the smiling face she’d often drooled over in pictures had disappeared. Did the grim man before her smile at all anymore? His sharp eyes seemed haunted in a profound way, his stares hyper-vigilant and unwavering…focused on her but, at the same time, a million miles away. She detected no humor dancing in them at all, despite the comical barbs they’d traded over the smashed pies. Hell knew bottomless grief gripped her still from time to time, wringing tears from her when she least expected the reminders of her loss. But whatever embroiled Slate seemed worse, as if he’d slipped into a dark crevice of endless, dismal eternity and couldn’t find his way back.

Yeah, and good luck with that, girlie-girl. 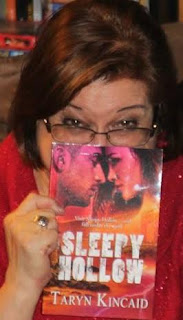 Taryn Kincaid writes paranormal, historical romance and contemporary romance, sometimes spiced with a little humor or a lot of snark. She enjoys pinching and tickling words to make them dance. Her latest, RAIN, a post-apocalyptic retelling of Sleeping Beauty, is out now from Decadent Publishing. HER CAPTAIN, a Tempting Signs romance (Capricorn) from Fated Desires Publishing, will release in December, 2015. HER CAPTAIN is available for Pre-Order now!