Welcome to my stop on the Excerpt Tour, presented by Goddess Fish Promotions, for Lovers, Players & the Seducer by J.A. Jackson.  Please leave a comment or question for J.A. to let her know you stopped by.  You may enter her tour wide giveaway, where J.A. will award a $10 Amazon GC to one (1) randomly chosen commenter, by filling out the Rafflecopter form below.  You may follow all of the stops on the tour by ciicking on the banner above, the more stops you visit, the better your odds of winning. 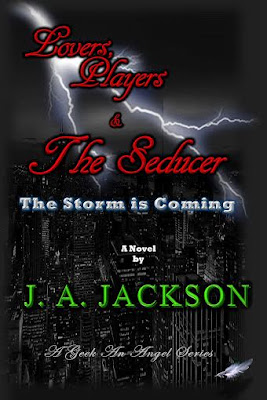 Lovers, Players & the Seducer
By J.A. Jackson
A Geek an Angel Story, Book 4

Nicholas La Cour loves money. In the game of betrayer and betrayed he thinks his sister Lacey is the prefect target for his manipulative schemes to keep his financial ruin a secret.

Gorgeous Lacey La Cour lost her hopeful and playful spirit after being dumped by her childhood sweetheart. Now an adult, she is strong and independent.

Determined to find the answer to his money problems, Nicholas discovers his best friend Kienan Egan is strangely attracted to his sister Lacey.

Does his sister’s love life hold the answers to all of his problems?

Does Nicholas have the prefect plan?

A vengeful seduction is swept into play as tragic forces are unleashed in a dangerous game of deception and greed unlocking doors to the past.

Will Lacey discover her brother’s deception before it’s too late?

When it’s all said and done it’s all about the well-heed things in life, family, friendships, affairs, revenge, and romance.

Just after midnight in Firebaugh California, Quinn tiptoed out of the front door of his grandmother’s home breathing a sigh of relief. If he had to watch another episode of The Price is Right he’d scream. He smiled easily, remembering he’d just been saved when the old girl finally feel asleep and started snoring.

“Another wasted Saturday spent with my grandmother,” Quinn thought, as he made his way to his car.

At least once every other month Quinn visited his grandmother. He glanced at his watch. It was almost midnight. He couldn’t believe he’d spent almost eight hours listening to her talk and watching those TV shows she loved, with her.

Quinn smiled easily as he quickly started his car and made his way down the lane. Once he was out of view of his grandmother’s house he pulled over and made the call. 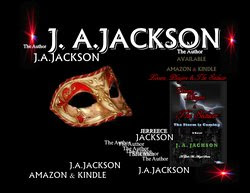 J.A. Jackson is the pseudonym for an author, who loves to write deliciously sultry adult romantic, suspenseful, entertaining novels with a unique twist. She lives in an enchanted little house she calls home in the Northern California foothills.

She spent over ten years working in the non-profit sector where she wrote grants, press releases and contributed many stories to their newsletter. She was their Newsletter editor for over ten years. She loves growing roses, a good pot of hot tea, chocolate, magical stories, suspense stories, ghost stories, and reading Jane Austen again and again in her past time.

Books by J. A. Jackson & Links

A Geek an Angel Series

Stand A Lone Books:
The Mistress of Desire & The Orchid Lover

When A Taker Dreams
http://www.amazon.com/dp/B00ND6HV3C