Welcome to my stop on the Virtual Tour, presented by Goddess Fish Promotions, for Fairly Certain by Deborah Ann Davis.  Please leave a comment or question for Deborah to let her know you stopped by.  You may enter her tour wide giveaway, where Deborah will award a $20 Amazon/BN GC to one (1) randomly drawn commenter, by filling out the Rafflecopter form below.  You may follow all of the stops on Deborah’s tour by clicking on the banner above.  The more stops you visit, the better your odds of winning. 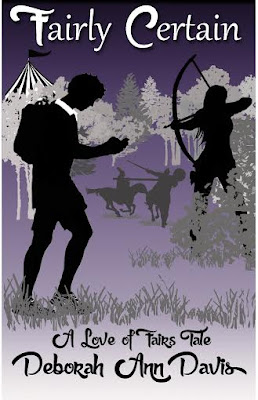 Fairly Certain is the unlikely adventure of nineteen year old Petir Capota, a computer geek who finds himself back in the days of Robin Hood after falling out of a tree in Connecticut. He awakens surrounded by a band of young British scavengers, clothed as if in Old England. His instinct to freak out is tempered by the arrival of a fair maiden wearing a bow…and arrow. Normally, fair maiden types don’t go for computer geek types, but for some reason, Petir is fairly certain he can do whatever he wants in this realm.

With the conflict of the Royals escalating, Maid Rianne has joined the outlaws hiding in the forest, outwardly defying the handsome and accomplished knight to whom she is promised. She is fairly certain she merely feels flattered by Lord Petir’s uncensored admiration of her skills with the staff and bow, the same unmaidenly pursuits disdained by her own knight. However, that does not explain the quickening of her pulse produced by Lord Petir’s unguarded gaze.

The outlaws bring Petir to their camp to tend his injuries. To Petir’s delight, and to Maid Rianne’s dismay, they invite him to join their merry band. It’s all fun and games until she is captured by the enemy. Now, a geek with no ability to defend himself must find a way to rescue the fair maiden.

Maid Rianne lifted off Petir in alarm, her arms bracing her from both sides of his body as she hovered just inches away. Although they did not touch, their gazes locked them together as their ragged breathing blended with the night noises. Still she did not retreat.

That was enough of a signal for Petir. He propped himself up high enough to reach her mouth and waited. Her face tilted toward him, and he brushed her lips with his.

Now, that was a tingle.

Magically, she deepened their kiss. She was so warm, and—

“Be sure to check on our guest before you bed down,” directed a male voice from outside the tent.

Maid Rianne’s head shot up. Panic washed across her face as she scrambled to her feet, frantically tugging her clothing and smoothing her hair. The flap of the tent quietly opened, and a head popped in.

The intruder offered a puzzled look at her waspish tone as she self-consciously straightened her sleeves. He politely tipped his head at Petir, a suspicious glint in his eye. “Very well. Good evening, sir.”

“One moment, sir,” she said, scooping up her belongings. “I shall accompany you,” And just like that, she was gone.

Dazed and elated, Petir flopped back on the pallet, all pain forgotten.

Maid Hottie had actually jumped his bones. Too bad you couldn’t wrap it up in a box and put a bow on it. Now that would make a great birthday present. 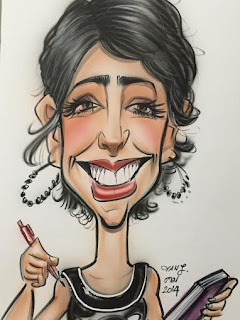 DEBORAH ANN DAVIS writes Quirky New/Young Adult Fiction with a Twist. She began writing when searching for inspiration for her 5th grade English Journal. Lo and behold, she found her world was full of funny tales just waiting to be told. As she grew older, it never occurred to her to pursue writing, not even when she discovered her flare for telling stories at college parties.

After a string of undergrad majors, she realized she could reach a captive audience EVERY DAY in the public school system. As you probably know, teenagers love to laugh, and what could be more entertaining than Biology, Earth Science, and Environmental Science? Then there's an added bonus: Once teens know you like to laugh, they want to make you laugh. Go figure.

After a particularly nasty bout of Lyme disease, she turned to Fitness to boost her health, and to Writing to boost her happiness. Currently, she is a healthy and happy Educational Speaker and a Certified Personal Trainer.

Twelve years after their first kiss, Deborah reunited with, and married her childhood sweetheart. Together they coached their daughter's AAU Basketball Team, which swept States two years in a row. (Yay!) Then, for several years, their daughter and their money went to college.

They presently reside on a lovely lake in Connecticut. When she isn't writing novels for her Love of Fairs series, she enjoys dabbling with living a sustainable life, dancing, playing outside, and laughing really hard every day. She also promotes increasing your movement throughout your day as Wiggle Writer in her Merry Meddling blog at http://deborahanndavis.com/merry-meddling/.