Welcome to my stop on the Virtual Tour, presented by Goddess Fish Promotions, for Husband Hunters by Genevieve Gannon.  Please leave a comment or question for Genevieve to let her know you stopped by.  You can enter her tour wide giveaway, where Genevieve will award three (3) randomly drawn commenters a digital (1) copy of her book, by filling out the Rafflecopter form below.  You can follow all of the stops on Genevieve’s tour by clicking on the banner above.  The more stops you visit, the better your odds of winning. 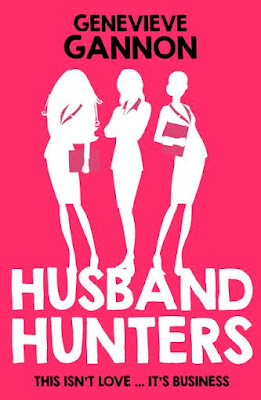 Clementine, a psychologist specialising in couples counselling, is reeling from the discovery that her boyfriend is married. Annabel, an ex-model, only seems to attract men who want her as a trophy. Daniela, a civil engineer, is stuck in the friendzone.

Abandoning the romantic notions of true love that haven't worked out for them, the three decide to use their considerable professional skills to find a partner. this isn't about hearts and flowers; it's about being practical.

Warm and witty, Husband Hunters is about what happens when you try to engineer love. For fans of Zoe Foster, Lauren Weisberger and Mhairi Macfarlane.

Annabel counted four sets of silicone breasts at her table of twelve. All were sprayed an unconvincing brick colour. They were matched with equally fake dye jobs in Swedish blonde, beach blonde, honey and platinum. She could practically recite the colour numbers: 101, 102, 107 … During her modelling years she had been them all. From ash to ebony, and everything in between. The uniform look of the women at her table was finished with Botox lips and a shellacking of gloss. They were talking about teeth-capping or teeth-whitening or something. Annabel sighed and stole the pear tart her neighbour had deserted, thinking, ‘What am I doing here?’

She used to love weddings. It was like being part of someone’s own personal fairy-tale. Boy meets girl. Boy finds the courage to send girl text message. Boy and girl have extravagant wedding and live happily ever after in Willoughby. And then there are the outfits: elegant Aurelio Costarella cocktail dresses, sweeping Jayson Brunsdon gowns, conceptual Ellery garments. Corsets so tight they make your eyes water. Shoes finer than Cinderella’s, purchased by women hoping for a happy ending of their own.

But this wedding represented something completely different.

‘Yes! The lacework was all done by hand.’

Annabel swivelled in her chair to get another look at the bride. Mirabella had swapped the veil she had worn at the church for a tiara, and was holding court with an older gentleman in a military jacket and the man who reads the six o’clock news. Her crimson lips were the same colour as her hair. She caught Annabel’s eye, then looked quickly away. Mirabella Burbage-Jones didn’t like Annabel, and Annabel didn’t like Mirabella Burbage-Jones. But she had introduced the bride and groom, which apparently was worth a free plate of salmon.

‘You know who could use some lipo,’ said one of the half-silicone perma-babes on Annabel’s table. She nodded in the direction of the groom.

Humphrey Harrison McRae was affectionately known as Humpty because of his resemblance to the nursery-rhyme egg. He had a very big heart, but his generosity was prone to exploitation. Mirabella was the latest in a long line of millionaire-wannabes he picked up at places like Marble Bar and The Ivy, where they stuck to him like lint.

‘My Humpty is so clever,’ Mirabella would purr at every public opportunity, as she played with the ropes of pearls around her neck. Annabel was trying to believe that Mirabella truly cared for him. Humpty deserved love, which is why it infuriated her to hear the buzzards on the ruby table being so cruel behind his back.

‘He is lucky to have her,’ they said, picking all of the interesting bits off their food and eating the calorie-light bases.

‘She knows what she’s doing. She’s set for life now.’

‘She’s much better off now than when she was with that teacher.’

‘Did you see the difference in him since she’s been in the picture? The new haircut, the cologne … Let’s hope he doesn’t blow it.’

‘Ssh! Ssh!’ They hit each other with acrylic fingernails as he approached.

Humpty settled himself next to Annabel, beaming. Mirabella was swanning around the dance floor in her Chantilly lace, her champagne glass proffered in a sustained toast to herself, shouting things like ‘Daah-ling, have you met the Devlins?’ and ‘Oh, you must come to our summer house when it gets warmer — there’s plenty of room.’

He watched for a moment, the pride plain on his face, before turning to Annabel.

‘Well done, Humpty.’ She leaned over and gave him a kiss. ‘I hope you’re very happy together.’

He gave a satisfied sigh, then shuffled around to face her with a furrowed brow. ‘What about you? You look a bit forlorn. How’s your love life?’

‘Oh, you know me.’ She looked over his shoulder at the room full of men.

She smiled weakly. ‘Thank you. You used to be such good friends—’

One of the perma-babes interrupted their conversation.

‘I haven’t seen you in any of the magazines for a while, Annabel,’ Veronica Bowers said. ‘Not modelling any more? It’s hard when your looks go, isn’t it?’ She screwed up her face like a squirrel that had bitten into something sour.

‘Aw,’ Veronica made a sympathetic noise. ‘Is that why you haven’t had time to find a husband?’

Annabel gave her an acid smile, then put a forkful of pear tart into her mouth to stop herself from saying something she’d regret.

‘Annabel’s business is her one true love,’ Humpty said, coming to the rescue.

Sweet Success was regarded as a rising star in the public relations world.

‘I work an eighty-hour week and it’s still less trouble than a man,’ Annabel said.

Humpty leaned towards Annabel and lowered his voice. ‘Speaking of trouble, any word from—’

‘No.’ She reached for her wine glass. ‘I haven’t heard a peep out of Hunter since Christmas.’

Genevieve Gannon is a Melbourne-based journalist and author. She wrote stories for music and fashion street press magazines while at university before moving to Canberra to do a journalism cadetship. In 2011 she joined the national news wire, Australian Associated Press, where she covered crime, politics and entertainment. Her work has appeared in most major Australian newspapers including The Age, The Australian and The Daily Telegraph.

She currently lives in Melbourne where she is a court reporter. At night time she writes romantic comedies. Husband Hunters is her first novel.