Welcome to my stop on the Virtual Tour, presented by Goddess Fish Promotions, for Black Diamonds by Vogue.  Please leave a comment or question for Vogue to let her know you stopped by.  You can enter her tour wide giveaway, where Vogue will award one (1) randomly drawn commenter a $10 Amazon/BN GC, by filling out the Rafflecopter form below.  You can follow all of the stops on her tour by clicking on the banner above.  The more stops you visit, the better your odds of winning. 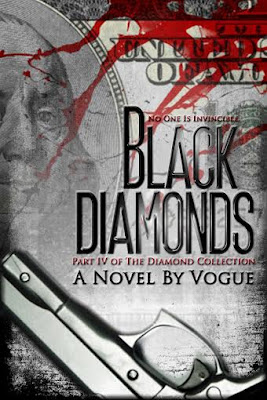 Within the last year, acclaimed fashion designer, Carmen Davenport, has witnessed the ups and downs of being romantically linked to one of New York’s most prominent men. On the heel of her engagement to Jay Santiago, a Puerto Rican businessman, she learns her oldest daughter has been kidnapped. A direct result of an ongoing war between her fiancé and a disgruntled drug kingpin, Carmen becomes determined to put an official end to the conflict.

She sets out to track down her daughter only to be met with unforeseen obstacles. A criminal investigation, led by her soon-to-be ex-husband, Michael Kane, leaves her fiancé behind bars. Due to Jay’s incarceration, Carmen is placed in the care of his estranged cousin, Gully. He constantly reminds Carmen of the price of fame, ultimately forcing her to take matters in her own hands. Determined to bring her daughter to safety, she takes a no holds barred approach to ensure her daughter’s return.

“So you want me to accept the fact that my daughter has been kidnapped?”

Carmen looked over at Kane and shook her head. “I don’t even want to accept that. I most definitely wouldn’t tell you, too. All I know is what I’ve told you already. I guess we’re going to have to wait and see what the detective says. He probably knows more since they’ve been running tests.” Carmen bit her lip out of fear only because she knew she was withholding information from Kane. She was wrong in not telling him that Kristian’s kidnapping was a result of the beef between Jay and Blu, but she knew if she did, Kane would demand they return to Malik’s house. He would shoot Jay dead, Carmen thought. Humph, like I don’t want to do the same. The only thing stopping me is the fact that I’m in love with him.

“Kristian never mentioned anything to me about having a problem with someone. She didn’t say…” Kane paused as he made a right turn, starting to remember a conversation he shared with his daughter. Shortly after Carmen announced she wanted to separate, he had come home to remove his items from their bedroom. Kristian had tried to talk to him about someone who was bothering her, but he had pushed her away. Now, she was gone and the only thing he had left was her cell phone and purse, which were miles away in Georgia.

Other Books in The Diamond Collection Series 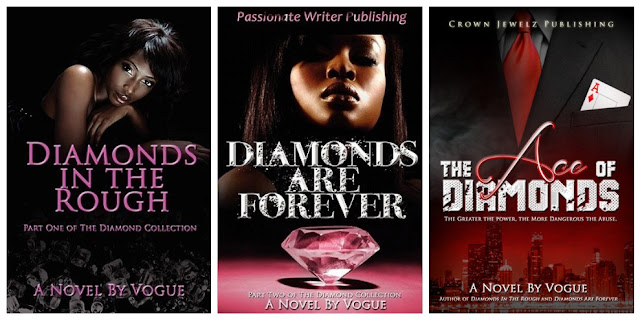 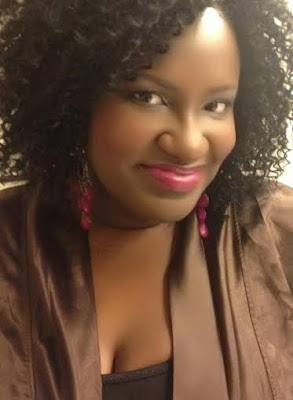 Born and raised in Greenville, South Carolina, Vogue’s journey through the world of creative writing first began in middle school with poetry and songwriting. While the mix of rhythm and words was the initial passage to self-expression, it was the discovery of prose that opened the door to a world of endless possibilities. An avid reader of Urban Fiction, Vogue felt the need to create literary works that had an equal balance of street lit, drama, romance, and faith-based undertones.

By 2010, Vogue had written drafts of the entire ten book series and in June of 2010, Diamonds In The Rough, was published for her to share with the rest of the world. Soon followed by Diamonds Are Forever in October of 2010 and The Ace of Diamonds in February of 2013, Vogue joined the league of other writers, determined to make her mark in the literary world.

Still writing, Vogue released the fourth book in the series, Black Diamonds, on July 4, 2015. She is currently working on Diamonds N’ Roses, the fifth installment of the series.