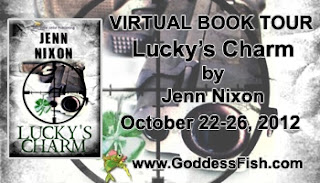 Welcome to my stop on Jenn Nixon's Virtual Book Tour for Lucky's Charm.  Please be sure to leave a comment or question below for Jenn as she will be

Me:  Lucky's Charm is your fourth published book.  Can you tell us what the inspiration for this romantic suspense was?

Jenn: I’ve always loved strong female characters like Max from Dark Angel or Sydney from Alias. I’m also fascinated by serial killers and hit men. So while brainstorming with my Best Friend, we came up with a female character who was an assassin but with a higher set of morals than your normal killer. This was before Dexter became a TV show—which I specifically didn’t watch until all the Lucky books were completed so I wasn’t influenced by the serial killer aspect. It worked, and it was a little creepy how similar Dexter & Lucky’s struggles fleshed out.

Lucky’s Charm didn’t start out as a romantic suspense, I was originally going for a straight mystery-suspense, but then Kenji showed up and changed the whole dynamic of the novel! He became such an awesome character in his few short scenes that I kept him around and let the story unfold between them.

Me:  On your website you list Lucky's Charm as book 1, will you be writing a series about these "moral assassins" and do you know how many books you are planning to write.  Will we be seeing  Felicia "Lucky" Fascino  in any upcoming books?

Lucky is the main character in all three books, but her family, Kenji, and eventually the “villains” show their faces. Things get worse for Lucky before they get better, but I can say she gets a happy-ish ending.

Me: Are you a full time writer or do you have a day job?

Jenn: I have a day job. I work for a CPA firm as sort of a Jack-Of-All-Trades. I do a little bit of marketing, administrative & tax work, and some office management. I love wearing many hats, keeps the day moving by fast and always gives me something new to do each day!

Me: Do you have a particular "writing ritual" where you have to be in a certain place, have certain snacks or anything routinely in order to write?

Jenn: The only ritual I seem to have with writing is music. I always have something playing in the background when I’m writing. Sometimes, when I’m in a tough scene, and I’m not sure where to do, I’ll put on a specific genre of music to help create the right mind set to help me get into the characters head. Other times, it’s just good to help keep the pace of a fight scene or the slow interlude of an emotional or intimate scene between characters.

Me: Who or what has been the largest influence on your writing?

Jenn: I started writing long before I knew I wanted to be an author. My teachers in school, starting in grammar and going all the way through High School encouraged me to continue writing by offering me side projects and feeding my love of literature. I’ve been influenced by mystery writers like Mary Higgins Clark and John Sandford, two authors I began reading after graduating from kid’s books like Encyclopedia Brown and Nancy Drew. Most recently, other author friends from writers groups, my awesome editors and publishers, and even my beta readers and critique group partners have helped me become a better writer. And I’m still learning, which is wonderful!

Me: Has your family been supportive of your venture into being a published author?

Jenn: My family and friends are the best. They are always listening to me talk about my characters and novels. They help me promote online to their friends. They even read the books and review them! The majority of my books are in ebook format right now, but print books are on the way, so the rest will be reading soon too.

Me: You're a life long resident of New Jersey.....which Bon Jovi band member is your favorite?  Have you ever attended one of their concerts?

Jenn: I’ve always been partial to lead singers because I’m a singer myself. So I’d have to say Jon. I haven’t actually been to a Bon Jovi concert, but I am a fan. Have to support the Jersey boys!

Quick Get To Know You Questions:

Wine or Beer? Neither.

If your friends had to describe you in one word - what would it be? Adorkable

What are you currently reading? Stolen Prey by John Sandford 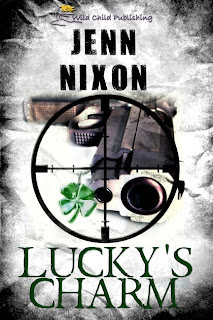 To protect her family and find a killer, Felicia "Lucky" Fascino assumed her adoptive father's identity and joined the network of moral assassins to finish the job he began. Eliminating the man responsible for murdering her mother has consumed her for the last five years. Completing the job is the only way Lucky and her family can return to a safe and normal life. Lucky's uncle, Stephen Chambers, hasn't come close to tracking the killer. He announces he's stepping down as her handler to concentrate on the investigation and names Elizabeth, his daughter, as successor.

Keeping secrets is a family trait, and Elizabeth's addition to the business tests Lucky's ability to maintain the pretense that the job doesn't affect her despite the fact that all network hits are hardened criminals. While keeping her family at arm's length, Lucky begins to feel the weight of her career choice and reclusive lifestyle. Then a chance encounter with an enigmatic hit man during one of her jobs turns into a provocative and dangerous affair. Distracted by the secret trysts with Kenji Zinn and mounting tension within her family, Lucky starts to make mistakes that threaten her livelihood and almost claim her life. When her family is targeted, Lucky must make several rash decisions she believes can save them and preserve her own sanity.

“I’m not…good at this anymore.” Lucky puffed out a heavy breath and clutched the phone. “I can’t wrap my mind around it. I’ve really tried to forget you.”

“Be with someone while doing what I do. Sharing my life… I haven’t for a long time. I don’t see how I can do it with—”

That stopped her cold. Lucky shut her eyes and banged her head against the wall. Not only was it the oddest conversation she’d ever have, it frightened her because he was dead on.

“Why add to the torment?” she snapped.

“Being with you was far from torture.” His reply was husky and saturated with innuendo. Lucky ignored the ripples of electricity on her skin.

“We’re not good people, Kenji. I’ve already accepted that, but I think you’ve still got blinders on.”

“No, I have a sense we are more alike than you realize. I know why you eliminated McKowen. He was a vile man.”

“Yeah… We might be the bad guys, but we’re never the villains.” Lucky softened her tone. “We’re not heroes either, just stuck in the middle somewhere.”

“This is what we do, not who we are. It does not change what happened between us. We should not ignore this.”

“I don’t know….” The contact with him did something to her, but finding the words to explain it seemed impossible. Lucky did want to see him again, though, not for all the right reasons.

“Where are you, right now?”

“Miami,” he said immediately. “Let me come to you, wherever you wish.”

“I….” The confusion twisted through her. He was determined without being forceful.

“The choice is yours. Call me after you complete your task,” he said without demand. 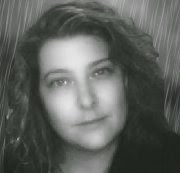 Jenn’s love of writing started the year she received her first diary and Nancy Drew novel. Throughout her teenage years, she kept a diary of her personal thoughts and feelings but graduated from Nancy Drew to other mystery suspense novels.

Jenn often adds a thriller and suspense element to anything she writes be it Romance, Science Fiction, or Fantasy. When not writing, she spends her time reading, observing pop culture, playing with her two dogs, and working on various charitable projects in her home state of New Jersey.

Please be sure to leave a comment or question below for Jenn as she will be giving away one backlist ebook at every stop for one lucky commenter, and she and Wild Child Publishing will be awarding a $10 Wild Child Publishing GC to a randomly drawn commenter during the tour.  You can follow her tour stops here, the more often you comment, the better your odds of winning.