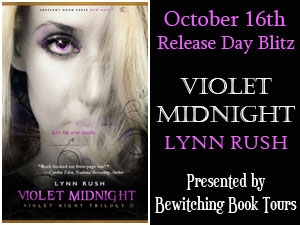 Welcome to my stop on Lynn Rush's Virtual Release Day Blitz for Violet Midnight.  Please be sure to leave a comment or question below for Lynn to let her know you stopped by.  You can fill out the Rafflecopter form below to enter her giveaway.

Let the Hunt begin….
Blending in with her college co-eds proves difficult for vampire Hunter, Emma Martin, considering the mystical tattoo on her wrist glows whenever Vamps are near. And after three months of silence, the glow is back with a vengeance.
Jake Cunningham witnesses Emma, a violet-eyed beauty, using unimaginable powers to fight off a fanged creature. Finally, after two years of searching, he may have found out what he’s become—a Hunter, like Emma.
Thankful for an ally in the fight against the Vamps, Emma finds hope and comfort in Jake’s arms. As she learns more about her new love’s family and its dark heritage, she may be forced not only to hunt them but to sacrifice her life to save Jake’s soul.
“Rush hooked me from page one! Fast-paced, gripping, this tale of vampire hunters is full of action and suspense. A great read! Buffy had better watch out…Emma Martin is one hunter to watch!” -Cynthia Eden, National Best-selling Author

***A portion of all proceeds benefits cancer research and awareness***

“What am I? You mean what sorority am I? Or—”
“No.” Jake crept forward until only three feet separated them. “I mean, what are you? Those three men…whatever they were—”
Emma let out the loudest, hopefully believable, fake laugh she could muster considering the circumstances. He’d seen everything.
Mind-wipe time.
“They were just drunk dudes, knocked me in—”
“No they weren’t. Look. It’s okay. I—things—I understand different.” Jake eyed the partially closed door across the room. “You can trust me.”
Emma huffed. Trust. Yeah, right. Two years ago, almost to the day, her life went bonkers. Strange things happened to her after the crash that killed her parents. She trusted no one, let alone a total and complete stranger.
No matter how drawn to him she felt.
He seized her wrist before she’d even registered he’d moved. Too distracted by his dominating presence in the small room.
She tugged at his grip, but he held fast.
Wait—was that warmth? He cuffed her wrist with his strong, able fingers. The same fingers that had caressed her spine so gently as she coughed half the pool from her lungs.
Damn water.
She hadn’t noticed any heat then, or when he had held her neck, maybe because of wet clothes and hair. But now, there was no clothing, no water to obstruct the direct skin-to-skin contact. It sent a dizzying heat up her forearm, over her shoulder and straight to her chest.
She’d not felt warmth—any fluctuation in temperature—in two years. Her lungs tightened, forcing her to take small gasps for air. God she missed heat. She missed cuddling. Missed human touch.
And he wasn’t even asking about her cold skin.
Probably assumed it was from the water. Didn’t matter. She let the tension roll out into his grip and absorbed the sensual feelings penetrating her barriers. Just for a minute.
“Interesting tattoo.” He turned her hand, exposing her wrist.
Damn, she’d lost her watch in the water!
He stood so close his breath whispered against her cheek. How could she smell a heady, earthy scent emanating from him through the chlorine saturating his clothing and hair?
“Does it mean something?” he asked.
Emma shook her head, too lost in his touch heating her blood to verbalize a response. Not that she’d tell him it identified her as a Hunter, a protector with kick-ass powers. Or that it appeared on her skin overnight, while she lay in a hospital bed after the crash two years ago.
With his free hand, he traced the arrow, and Emma’s legs morphed into wet noodles. She leaned against the desk, not having realized she’d backed up so far. Thankfully she had, because it kept her vertical.
What was happening to her?
His finger followed the pulsing blue vein to the crook of her elbow, up her arm until his hand cupped her shoulder, all the while, he held her wrist tight with his other hand. His already nearly black eyes darkened as the pupils ate up the dark irises. His gaze shifted, and his tongue moistened his plump, completely lickable bottom lip.
The heat that’d ignited in her heart suddenly pooled in her belly—very low in her belly.
He leaned forward, mouth only inches from hers. Even his breath on her lips was warm. Amazing. How could she feel warmth with his touch when she couldn’t with any other person?
Need more.
“I saw how strong you were. How you fought them off.” He stepped into her. “And this tattoo. I’ve seen it before.”
Oh, God.
“It’s a symbol of power. Apollo and Artemis.” His voice went husky.
“How do you know that?”
“I know a lot, Emma.” His hand followed the curve of her shoulder until he caressed the nape of her neck. “Why’d you pick this mark to put on your skin?”
A wave of heat stormed through her. “I didn’t choose it.” Emma licked her lips in anticipation. “Woke up with it two years ago.”
She stretched toward him, and the softest, warmest lips met hers. He tensed, probably at the cool temperature of her skin, but she didn’t care. She only craved his warmth. His touch.
So long she’d been without. 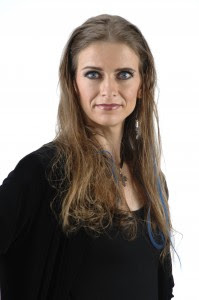 Driven to write, Lynn Rush often sees her characters by closing her eyes watching their story unfold in her mind. Lynn Rush is a pen name that is a combination of two sources – Lynn, the first name of her mother-in-law, who passed away and Rush – since the author is a former inline speed skater and mountain biker. All of Rush’s books are dedicated to Lynn, her namesake, and a portion of the proceeds benefits cancer research and awareness.
Rush holds a degree in psychology from Southwest Minnesota State University and a master's degree from the University of Iowa. Originally from Minneapolis, Rush currently enjoys living in the Arizona sunshine by road biking nearly 100 miles per week with her husband of 16 years and jogging with her two loveable Shetland Sheep dogs.

Please make sure to leave a comment or question for Lynn below to let her know you were here. You can fill out the Rafflecopter form to enter her Kindle giveaway.
a Rafflecopter giveaway
Posted by Maria D. at 8:21 AM