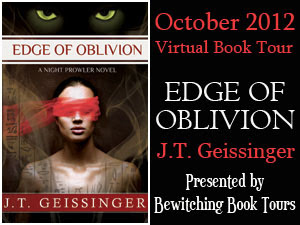 Welcome to my stop on J.T. Geissinger's Edge of Oblivion Virtual Book Tour.  Please be sure to leave a comment or question below for J.T. to let her know you were here.  You can fill out the Rafflecopter form below to enter her giveaway.


An Ikati shape-shifter able to turn to vapor or panther and also having the very powerful gift of suggestion, Morgan’s rebellious nature has gotten her into trouble on more than one occasion. Today we chat about food, vacations and shoes.


Q: What would most embarrass you?

A: (Laughing) I’m way more easily pissed off than embarrassed, so I don’t know. Maybe if I had to sing in public. The thought of doing Karaoke makes me queasy.

Q: What do you loathe?

A: (Her face darkens at this question.) Rules. All kinds of rules. For me, a rule is always made to be broken.

Q: What do you love?

A: (Smiling now.) Well…I’m fond of a certain assassin named Alexander. Apart from him, I love moonlight and summer storms and shoes. God, I love shoes. Shoes are my kryptonite; I will literally become weak-kneed at the sight of a pair of Louboutin’s.

A: Since moving to Kadavu…abalone. Xander and I devour them raw right after harvesting them from the volcanic rocks in the shallow water of the bay. Sweeter and more tender than oysters, they’re divine. My second favorite food is caviar, but I haven’t had that in a while! There’s only one main grocery store on this island!

Q: If you could vacation anywhere in the world, where would it be?

A: Here! Kadavu is the fourth-largest island in the Fiji island chain, and it’s got to be the single most beautiful place on earth. Crystal waters, pristine rain forest, untouched beaches…I hope I’ll never have to leave this place.


A: I’m a creature of the earth, darling. Driving, for sure. (Smirks.) Running is even better, especially in panther form.

Morgan Montgomery is waiting to die. Branded a traitor by her tribe, the Ikati shape-shifter has no hope for mercy—until Jenna, the Ikati’s newly crowned queen and Morgan’s former ally, offers one last chance for redemption. Morgan must infiltrate the Rome headquarters of the Expurgari, the Ikati’s ancient enemy, to destroy them once and for all. The beautiful renegade has just a fortnight to complete her mission or forfeit her life. Because she does not travel alone…

Xander Luna is a trained assassin and the Ikati’s most feared enforcer, famed for his swift brutality and stony heart. Fiercely loyal, he is prepared to hate the traitor under his watch—until they come face to face. For Morgan Montgomery arouses something unexpected inside of him, something that threatens everything he believes in and the fate of the tribe itself: a love as powerful and passionate as it is forbidden.
Sensual, thrilling, and action-packed, Edge of Oblivion will enthrall readers with nail-biting suspense and heart-pounding passion.

“Come,” barked Leander from behind the closed door. Matthew pushed it open. Not satisfied to merely enter the room with her trailing behind, he turned, grasped her by the arm, dragged her over the threshold, then released her abruptly, as if he’d been burned by touching her.
So of course she fell. Of course she did.
Caught on one of the heels of her shoes, the hem of her dress tangled beneath her feet. The delicate fabric gave way with a soft ripping noise and she pitched forward, unable to throw her arms out for balance because they were cuffed tight behind her back. She fell to her knees on the cold marble floor with a bone-crunching jolt that startled a pained gasp from her lips, but just before she fell flat on her face, something stopped her.
A pair of hands. Strong and warm at her shoulders.
She was caught and steadied, pushed gently back to her knees where she rocked, finding her balance. Then she lifted her head and looked up—
—into a pair of eyes, brilliant amber rimmed in kohl, that stared out from a sun-darkened face of such cold, savage beauty it sent a thrill of pure fear humming along every nerve. Adrenaline lashed through her body, primitive and chemical, and abruptly awoke the animal inside that bristled and hissed and screamed danger! at the top of its lungs.
He was huge—tall and thickly muscled, far larger than any of her lithe, sinewy kin—and had shoulders so wide she crouched in a pool of thrown shadows at his feet. His black hair, tipped on his wide forehead to a widow’s peak, was cropped close to his head. His clothes were black as well, simple and form-fitting, made for ease of movement. On his back was a pair of crossed swords, sheathed in leather scabbards. On his belt and boots were more weapons, gleaming wicked in the light.
But all this paled in comparison to the more imminent threat of his eerie, amber eyes.
They fixed on hers, unblinking, unfeeling, and she realized with another jolt that this man staring back at her in absolute stillness with that beautiful face and those scorching, fire-lit eyes wasn’t anything she’d ever seen before. He was alive, his body was alive, but behind that mask of perfection, there wasn’t a shred of humanity or mercy or kindness or feeling. There was nothing. He was dead.
Soul dead.
He was the most terrifying thing she’d ever seen.
“Xander,” said a voice from her right. Leander’s, she supposed, aware on a molecular level of her thundering heart, her frozen muscles, the stranger’s gaze that had dropped to the pulse beating wildly in the hollow of her neck. His nostrils flared with an inhalation, and for one wild, horrified moment, she thought he might lean down and tear out her throat with his teeth.
But he didn’t. He only lifted that piercing gaze back to hers and, in a motion of fluid, predatory grace, drew her to her feet. He released her and stepped back, never blinking, his attention never wavering, those piercing dead eyes never leaving her face.
“Xander,” Leander said again. “This is Morgan. Your flight for Rome leaves at one o’clock.” 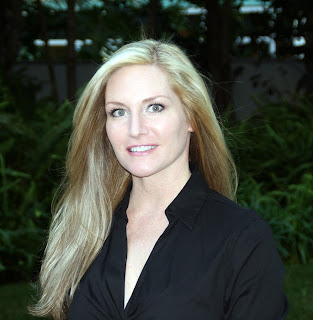 A life-long lover of reading and a self-professed “book addict,” J.T. Geissinger didn’t realize her dream of writing a novel until a milestone birthday forced her to take stock of her goals in life. Always believing the right time to commit to putting pen to paper would magically announce itself, it took waking up one cold January morning with a shiny new zero as the second number in her age to kick start her determination.


More than a year and two unsold novels later, it was time to take stock again.

But her determination matched her initial procrastination, and she kept on writing and learning and trying to improve, trusting that if it was meant to be, it would be.

Then, during a trip to Italy in honor of their 10th wedding anniversary and the honeymoon she and her husband never took, she received an email that would change her life. It was from a literary agent, and it contained the three words every aspiring author longs to hear: “I loved it.”

The manuscript was sold to Montlake Romance who published it six months later. Hitting the Amazon bestseller lists in both the US and the UK within weeks of publication, Shadow’s Edge was book one of the Night Prowler Novels. Book two, Edge of Oblivion published October 2nd, and book three will follow in the spring of 2013. Three additional installations in the Night Prowler series are planned for the future.

Edge of Oblivion, the second book in the Night Prowler series by J.T. Geissinger, is an elegant paranormal romance with well developed characters and a well paced plot. The world building is well done and easy to understand. Creating her own version of lore, shared in this books prologue, Ms. Geissinger creates the Ikati, an ancient tribe of panther shapeshifters with their own political issues hidden amongst the world we live in today.

At the beginning of this book, Morgan Montgomery, a young, powerful, and seductively beautiful member of the Ikati has been found guilty of treason and has been sentenced to death.  Prepared to meet her death, and do it gracefully so as not to give her enemies any additional gossip, she's surprised to be given a chance at redemption.  Not a great chance, but a chance none the less.  She never planned on getting a second chance or on falling in love with the enforcer sent to make sure she completes her tasks or dies trying.  Ms. Geissinger did an excellent job creating Morgan's character, I liked her from the very beginning and was rooting for her to somehow get a second chance.  As we get to know her, I began to understand how what she wants for her people, the Ikati, got her in trouble and yet I saw her as a noble character who really only wants the best for a society which really needs to adapt.

Xander Luna is known as a fierce warrior and enforcer.  Known more for his execution skills, he's not surprised to be assigned to watch over Morgan and help her complete her assigned task, destroying their enemy, the Expurgari. He's quite capable of killing her if she fails or attempts to escape from his supervision, he just never planned on developing feelings for her.  Ms. Geissinger did a good job introducing us to Xander, he's powerful, somewhat ruthless and has blocked out most of his emotions at the beginning of this book.  As he gets to know Morgan more, Ms. Geissinger brings him emotionally alive and we get to witness his growth.

The scenes between Morgan and Xander are well written and have good dialogue.  They are both powerful and they both need to grow emotionally.  We watch them grow closer together and realize exactly what's at stake as the story moves along.  The secondary characters are also well written and make good contributions to the plot.  I especially liked Jenna and Leander, the Queen and Alpha of the Ikati, who for reasons of their own put Morgan and Xander together.

Will Morgan and Xander's trip to Rome reveal what they need?  Will Morgan get her chance at redemption and freedom?  You'll have to read Edge of Oblivion to find out.  While I was able to read and enjoy this book on it's own, I do plan to go back and read Shadow's Edge, the first book in the series as there were times I did feel I would have understood or gotten more out of certain sections of this book if I had read it first.

FTC Disclosure: I received a complimentary copy of this book in exchange for a fair and honest review