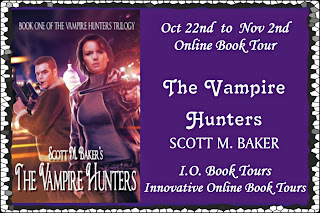 Welcome to my stop on Scott M. Baker's Online Book Tour for The Vampire Hunters.  Please be sure to leave a comment or question below for Scott to let him know you stopped by. 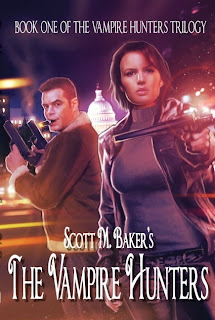 
As former Boston cops, Drake Matthews and Alison Monroe thought they had experienced it all... until they found themselves tracking down a serial killer who turned out to be one of the undead. Stopping him cost them their careers and almost their lives. Thanks to an influential and anonymous benefactor, Drake and Alison find a new job ridding the streets of Washington D.C. of the vampiric threat terrorizing the nation's capital.


Only this time, Drake and Alison are not facing a single vampire but an entire nest led by Ion Zielenska, one of history's most evil and twisted masters. As the vampires indiscriminately prey on humans, seeing them as nothing more than food to satiate their hunger, they create a wave of violence that threatens to engulf the city. Orchestrating the carnage is Antoinette Varela, the mistress of the nest,who realizes that for the nest to survive the hunters must be eliminated. However, when her vendetta turns personal, the hunters find themselves in struggle they are not prepared for.

Even at ten in the evening, Union Station thrived with activity.  Despite
the hour, scores of people bustled around the main concourse.  Passengers disembarking from, or waiting to board, their late-night train.  Family and friends gathered to greet them or see them off.  Porters hauling luggage to the appropriate platform.  Cleaning crews sweeping the concourse and emptying trash cans.  Shop owners peddling books, magazines, and last-minute souvenirs to weary travelers. And a vampire on the prowl for food.
Drake originally picked up its trail on the Mall, a prime hunting ground for vampires.  Spotting the thing had been easy enough.  On a balmy autumn night it was the only figure along the Mall wearing a soiled red windbreaker with the hood pulled tightly over its head.  Before Drake could close in to verify and make the kill, however, the vampire strayed from its usual pattern.  Leaving the Mall, the vampire set off into downtown Washington, following Constitution Avenue, a route that provided it with more opportunities to feed.  Drake had followed at a discrete distance, waiting for a chance to corner the evil and eliminate it.  With so many people around, though, that chance had not materialized.  When the vampire turned onto Louisiana Avenue and headed for Union Station, Drake hurried to catch up.  He was still far enough behind that when he entered the train station fifteen seconds after the vampire, the thing already had melted into the crowd.
Drake now wandered the concourse, hunting his undead prey.  That turned out to be far from easy.  Union Station had two levels, each with a labyrinthine maze of corridors housing gift shops and food stalls.  Beyond the station lay a multi-level parking garage, loading platforms, and maintenance yard.  Drake scanned the area, vainly looking for a figure in a red windbreaker.  So as not to look suspicious, he stopped occasionally at a bank of computer monitors listing the arrival/departure notifications as if checking on a train’s status, and used the chance to scan waiting passengers.
He had just stepped away from a bank of monitors at the west end of the concourse when the cellular phone in the carry case on his belt began to ring.  Only one person had the number—Alison Monroe.  She had followed him from the Mall in their midnight-black Dodge Ram and now sat parked in front of Union Station, ready to move at a moment’s notice.  Drake reached down and pressed the CALL button, then spoke into the microphone of his headset.
“What’s up?”
“Any luck?”
“Nothing.”  Drake sighed.
“Sounds like par for the course for you,” she teased.
Drake smiled.  “If you think you can do better, you’re welcome to try.  I’d love to sit in the truck once in awhile and let you do the boots on the ground.”
A chuckle came through the headset.  “Sorry, boss. You don’t pay me enough for that shit.  So what do we do now?”


As the adversaries faced off, the train pulled into Foggy Bottom Station. The passengers practically pulled the doors open to escape. When the doors finally did open, they ran out onto the platform and dashed to safety. Seconds later, the doors slid shut and the train began to pull out of the station.

“That suits me fine.” Toni hissed and sprinted down the rail car.

Alison pushed off the deck with her left foot and spun her body around, slamming her right foot into Toni’s head in a tornado kick. The master careened to the side and stumbled between two rows of seats, smashing the window, momentarily stunned. Pulling a stake from her belt holster, Alison ran between the seats and raised the stake to inflict the fatal blow. Toni’s hand shot up and grabbed Alison by the wrist. With one thrust, Toni threw the hunter over three sets of seats. Alison landed on her right shoulder in the opening by the doors, sliding across the deck until her back slammed into the center pole.

Toni flew over the seats and landed on top of Alison’s chest, knocking the wind out of her. The master pushed herself down on Alison, pinning the hunter’s pelvis to the floor with her own, then ripped open Alison’s blouse to expose her neck. Bearing her fangs, Toni leaned over, pausing only inches from the Alison’s neck.

“Not if I have anything to say about it,” a voice shouted from behind Toni.

Toni looked up to see Drake standing at the opposite end of the car. She snarled. “You have nothing to say about it. She’s ours now.”

Born and raised in Everett, Massachusetts (just outside of Boston), Scott M. Baker has spent the last twenty-two years living in northern Virginia. He has authored several short stories, including “Dead Water”, “Rednecks Shouldn’t Play with Dead Things”, “Cruise of the Living Dead”, “Deck the Malls with Bowels of Holly” (an alcoholic mall Santa battles zombie reindeer), and “Denizens.” His two latest short stories – “The Last Flight of The Bismarck,” about steampunk zombies, and “The Hunger,” a tale of cannibalism during a zombie outbreak – will both be released later this year in anthologies being published by Knighwatch Press.


Scott’s first zombie novel, Rotter World, which details the struggle between humans and vampires during a zombie apocalypse, was released by Permuted Press in April 2012. He has also authored The Vampire Hunters trilogy, which has been published by Pill Hill Press and received excellent reviews from Famous Monsters of Filmland and Fangoria, among others. Scott has finished his fifth novel, Yeitso, a homage to the monster movies of the 1950s set in northern New Mexico, which is currently with a publisher, and is wrapping up his sixth novel, Hell Gates, the first in a series of young adult novels set in a world in which the realms of Hell and earth have merged.


When he is not busy writing, Scott can either be found relaxing on his back deck with a cup of iced coffee, or doting on the four house rabbits that live with him.

Vampires, hunters and a rabbit named Van Helsing take the center stage in Scott M. Baker's paranormal thriller The Vampire Hunters.  With well developed characters, a fast pace and lots of action, I found myself glued to the world Mr. Baker created.  Using the classic battle between good and evil, humanity versus the vile undead, The Vampire Hunters, is a classic gothic tale in the vein of Dracula by Bram Stoker.

This tale begins in the midst of action as we are introduced to Drake Matthews and Alison Monroe in the middle of a vampire hunt.  As the action continues we see how determined they both are to take down the "snuffy" or regular vampire and eventually locate the "master" who is creating the monsters in Washington D.C.  Fiercely loyal, honorable and dedicated to their cause, neither Drake nor Alison will allow anything as trivial as getting arrested get in their way.  After all, they have a secret champion in their corner who always gets them off.  Mr. Baker did an excellent job introducing us to both characters; with flashbacks and through commentary from secondary characters we learn how Drake and Alison left their jobs as Boston cops and began their own "consulting" business in D.C.  We also learn how they became friends and about Alison's secret attraction to Drake her boss.  Keeping their relationship platonic is a good decision at this point.

Mr. Baker soon introduces us to the two true "villains" of the tale, Ion Zielenska and Antoinette "Toni" Varela, two "master" vampires who are centuries old.  Former lovers, Ion and Toni are now somewhat engaged in a power struggle to see who will really rule their "nest".  Both depraved beyond belief, their existence is an anthema to human existence - they have no value for humans other than as sport or food.
Even though their power struggle should give the hunters an advantage it makes Toni's vendetta personal and takes the fight to a higher level.  Providing us with insight into both vampires through flashbacks to their pasts, Mr. Baker almost humanizes his villains, it's only their total depravity that kept me from feeling some sympathy for their situation in life.

When the battle between the hunters and the vampires escalates will Drake and Allison be prepared to take it to the next level? And will the secondary characters we meet along the way help them or hurt them in the long run? You'll have to read The Vampire Hunter's to find out. I can't wait to read the next book in this series, Vampyrnomicon to see where Mr. Baker takes the battle next.

FTC Disclosure:  I was provided a complimentary copy of this book in exchange for a fair and honest review

Please check out these other stops on Scott M. Baker's Online Book Tour for The Vampire Hunters: