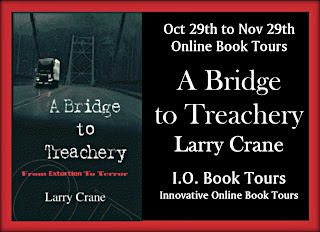 Welcome to my stop on Larry Crane's Online Book Tour for A Bridge to Treachery.  Please be sure to leave a comment or question below to let Larry know you were here.  You can fill out the Rafflecopter form below to enter his giveaway.  All of the stops on his tour are listed below.

Imagine my surprise when my publisher confidently labeled my novel a thriller. It certainly has action and suspense, but it is also a love story. I had some preconceptions of what a thriller is—a hard boiled detective or other operative of some kind engages his enemies in a shoot ‘em up potboiler—otherwise known as pulp fiction. My book was no thriller. My title was Quality Guy, an ironic label applied to protagonist Lou Christopher by his arrogant female employer in my nuanced... blah blah blah.  Lou Christopher is anything but hard boiled. A http://amzn.to/RmJQNlshoot‘em up?  Me? But this was long before I had any understanding at all of the publishing industry.

“Look, we like it but you’re going to have to lose the title”, they said.
“Got any suggestions?” I asked.
“You’re the writer,”
“Give me some hints,” I said.

I learned that a book needs to be genre-ized.  How else do you expect a potential buyer of your book to even settle into the right aisle in the store, let alone zoom-in on your book. There are over 350,000 books published every year. The name you come up with serves to slide your tome neatly into a clear category. Never mind some fuzzy phrase that somewhere in that fuzzy brain of yours encapsulates all of the story you’ve told. You’re going to have to declare yourself. You need to home in on the principal thrust of the book. Frankly, your book needs hard edged, hard hitting words.

Fast forward a year and a half.  The press release for my book A Bridge to Treachery reads in part: “This suspense-laden gnashing of guns, ammo, terrorism and deceit is now available in print and as an e-book through Amazon, Barnes & Noble, and other leading online retailers and book stores nationwide.“ Sounds a little shoot ‘em up. No?  Later, my publisher compares “Treachery” to First Blood, by David Morrell,  Perhaps, you know of the Sylvester Stallone movie named Rambo. It’s the same story.

But here are words from an Amazon review by Andrew Gifford  of First Blood: “The Rambo in the book isn't Stallone. And I love the little nuance that puts the sheriff a little bit in the grey area in terms of who's the villain and who isn't. We get some personality there, and a character we can identify with... And that changes the whole dynamic as the sheriff and Rambo go head to head and ultimately escalate a minor encounter into a calamity. This is First Blood as you can picture it from the movie, but the movie tore out the heart of the story, I think.”

So, here we are at the central premise of this post: The exigencies of the book business demand that the author and publisher of a book attend to the primary purpose of printing it: sales. If it weren’t for that premise no books would find the light of day. But that is not an excuse for readers to paint all books of a genre with the same brush.  Genre-izing is just a sales tool, albeit a necessary one.  Be open to the possibilities in all genres. You might be pleasantly surprised.

Are you open to the possibilities in all genres? 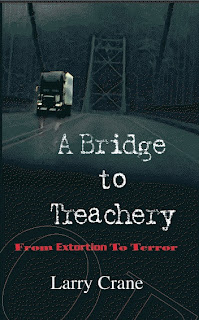 A Bridge to Treachery
by Larry Crane

Former Colonel Lou Christopher is an ex-Army Ranger retired from the military and contentedly working as a New York investment broker. After being assigned a number of lucrative accounts and becoming accustomed to living the good life, he discovers there is a pay back. His former military skills are requested under a threat of losing everything he has.


Handed a group of misfits to assemble into a military strike team, he is coerced into leading the team on a mission of domestic terrorism. At the center of a bridge outside of Manhattan, his strike team is caught in the act and unexpectedly becomes engaged in a deadly firefight. It's then that he learns the mission was a political maneuver from the highest levels of the U.S. Government-and ultimately realizes he has been betrayed by his superiors. Learning his team was considered nothing more than collateral damage and intended to be killed and left as scapegoats, he uses his unique military expertise and engages in a fight for his life.

As the strike team is decimated, he and a female teammate elude the opposition forces to survive and escape, turning the tables on his superiors. Using his distinctive set of military skills, he now becomes the hunter and vows to extract his revenge and bring them all down.

Lou did a double take and said: “Are you crazy or just completely friggin’ nuts?”

“You don’t have to be so sarcastic,” Sydney said.

“Here on the rocks? With you?”

“Excuse me. It was just an impulse. Ill-timed, it seems.”

“Timing has nothing to do with it.”

“And that was my last wish? Fuck you. I just go with my impulses.”

“I’m capable of a lot: lying, walking out, frittering away the most important things—but there’s a
limit, even for me.

“And I’m where you draw the line.”

“You’re not all that much yourself.”

“Should have been flattered, huh?”

“You said that.” Lou stood, walked away briefly, and then came back. “It’s the principle.”

“I’m saying we’re miles apart when it comes to this.”

“You probably had the impulse too, but you’re too tight-assed to put it to words.”

“It’s not a crime to say what’s on your mind. I believe in that! I’d rather be authentic than
anything else.”


Transplanted to Maine mid-westerner Larry Crane brings an Illinois sensibility to his writing. Larry graduated from West Point and served in the Army before starting a business career on Wall Street. His writing includes articles for outdoor magazines, plays, short fiction, and his most recent thriller novel, A Bridge to Treachery. In his spare time, Crane is a hobbyist videographer for his local Public Access Television Station and is a volunteer at his local historical society. Larry and wife Jan live in splendid isolation on the coast of Maine.

A Bridge to Treachery by Larry Crane is a well paced thriller about a career army man attempting to adjust to life as a civilian.  With well developed characters, good dialogue and just enough action to keep the pace moving,Mr. Crane's story grabbed my attention from the first page and never let go.  While Mr. Crane didn't have to do too much world building, the story is set in a contemporary setting, we get the hero's flashbacks of his previous military career.  It was also nice having a hero who was over 30 years of age with real world experience.

Lou Christopher is having a tough time adjusting to life outside of the army.  A career army man, Lou had never really planned for what he would do post retirement.  He also hadn't planned on being forced out of the army by the time he was fifty.  Determined to land a job which could lead to financial stability for his family, he finds himself working as an investment broker with little to no sales experience.

When Louis is given a choice account, which he didn't get on his own and which leads to large commissions, he's suspicious but is more than happy to accept the money.  Mr. Crane did an excellent job developing Lou's character, he's likable, fairly intelligent and cares for his family.  He's faithful to his country, the army and his wife, though he did cheat on her once - which she knew.  Like everyone else, he wants to be able to have a comfortable life and feel as if he's successful, something he's been struggling with since he was forced out of the army before he wanted to leave.

Maggie Christopher, Lou's wife, has been in love with her husband from the moment she first saw him.  A "military brat" she knew what life in the military was like and embraced it for most of her life.  Faithful to her husband, except for a short period of time when he was stationed overseas, she's used to living a modest life.  Happy for her husband and his new success, Maggie wants to take things slowly when it comes to the new money in their life.  She never envisioned having to save her husband's life due to a someone else's treachery.

Confronted at work by two men in trench coats, Lou finds himself being blackmailed into helping "stage" a fake terrorist attack.  If he doesn't cooperate, he'll lose the special account he's been given and he'll lose his position.  Reluctantly agreeing to go along with the plan, Lou and his "team" find themselves double crossed and expendable.  As the body count begins to pile up, Lou and only one member of his team make it away.  Now Lou will have to use all of his experience to make it back home in one piece.

Will Lou discover who is behind the double cross, which lead to his team being killed?  Will he be able to make it out of the situation he finds himself in and back to Maggie's side? The story takes several twists and turns which leads to a surprising revelation and a good ending.
You'll have to read A Bridge to Treachery to discover who's behind the "fake" terrorist attack, I certainly didn't see that twist coming.

FTC Disclosure: I was provided a complimentary copy of this book in exchange for a fair and honest review.