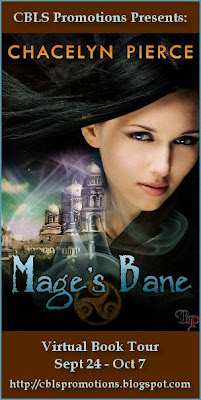 Welcome to my stop on Chacelyn Pierce's Mage's Bane Virtual Review Tour.  Please make sure to leave a comment or question for Chacelyn below and fill out the Rafflecopter Form to enter her giveaway.  You can follow her tour stops here. 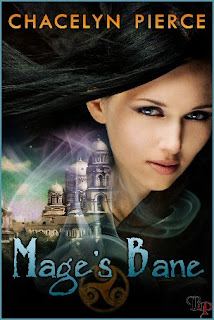 Being a rogue Akasha Mage is no easy feat for Aribelle Delano. Neither is summoning Riaz, a djinni that makes her knees go weak in a way that would shame her ancestors.

A new threat of demons intent on killing Ari for nefarious purposes has her putting all her trust in Riaz, who swears to protect her in the face of evil. But she's been taught that fully trusting Riaz is unwise, and he's constantly looking for a way to break free of her control.

Ari must face the new demonic threat and handle the Sultan of Old Magic who dominates her mind…and eventually, her body and soul as well. Together, her and Riaz must find a way to stop the demons and their summoner, even if that means breaking the rules that have been in place between the Akasha and Djinn for millenniums.

I stumbled into the musty room, trying to see through the hazy shimmer. I kept attempting to blink it away with no success. A cold sweat gave me clammy skin, and I was sure it was because of the venom being pumped faster by my erratic heartbeat. I was slightly nervous by the Djinn healing to come. The demon venom threatened to kill me at any moment, but I was actually more worried about Riaz's hands on me, touching me in my most intimate spots. Even though I'd known him a quarter of my life, I couldn't rid myself of this childish discomfort…or was it anticipation? This isn't a big deal at all, so stop acting like it is.

It wasn't like it was the first time. Riaz had healed me once before when I was a teenage girl. I'd tried to be a smart ass and show off to the big, bad Djinni my new driver's license—as if he cared about mortal things—and I got showy-flashy with my driving. I plunged us off the highway and down a steep embankment, hitting damn near every tree on the way down. The rescue crews and newspapers called me a lucky girl for over a year. Had it not been for Riaz's healing touch, I'm pretty sure internal bleeding would've taken me out at the tender age of eighteen. I'd been pretty out of it, but I remember Riaz had been fast-acting on keeping me alive. I know I hit my head pretty hard because after all his insults calling me a foolish girl, I thought I saw compassion in his eyes. I even thought I heard him telling me not to die and leave him. Well, I figure he said that out of fear he'd waste away on earth as nothing more than a specter.

He saved me to save himself then. But this particular night, I expected him to demand I send him back while I rotted away from demon venom. Just to prove he didn't care I needed him, I thought he might make me beg for my life. But he did none of that as he silently trailed behind me. I turned—a bit unsteadily—to see him close and lock the door with a tight-lipped expression.

The fast motion sent me into a dizzy state, causing my stomach to churn. I covered my mouth until the wave of nausea passed. Good lord, I'll be mortified if Riaz sees me puking or hears me spilling my guts in the bathroom like some college frat party. It was bad enough he'd probably never let me live any of this down. After a few deep breaths, I was finally okay enough to remove my hand and place it against my stomach.

"Take your shirt off and lay across the bed." Riaz's authoritative voice caused my pulse to jump a notch. Hesitantly, I lifted my grubby shirt over my head and let it fall to the floor. I glanced at him to see what emotion—if any—Riaz felt and sighed. All I saw was indifference—and me half-naked before him.

In fact, he didn't even try to catch an eyeful of skin as any normal male would. Granted, Riaz was no normal male, but most males, human or not, would soak up the exposed skin of a female. I wondered how he could look at me with irrelevance when I stood before him in only a bra. I couldn't keep my eyes off him at any given moment.

It was unfair he had a willpower I didn't possess. I mean, I wasn't drop-dead gorgeous, but I assumed—hell, I don't know what I assumed. Riaz was ancient. He'd had at least fifteen Akasha Mage handlers before me over the eras, so me parading around fully naked would only get a raised eyebrow and him asking if I'd fallen off the deep end again. I hated that the attraction was one-sided in our relationship.

It was immoral for an Akasha to become sexually involved with her Djinni. It would never end well for either party, and according to my former mentor, Yasmin, it was forbidden. But I couldn't help but wonder if he'd ever gotten intimate with any of his past mages. Someone must have slipped up to realize that bonking a Djinni wasn't the best tactic in any given situation.

A rocker by heart, Chacelyn Pierce is constantly ear plugged with heavy tunes blaring to stir up the phantom personalities that swarm her mind. It’s no surprise that she enjoys writing and reading to satiate her appetite for the male antagonist in a story. Married to a blatant redhead and mothering a diva, there is never a dull moment in the house. As a native Texan, she doesn’t personally own a horse but follows the unwritten southern rule of knowing how to ride one. When she’s not testing the emotional capacity of her characters, she works part time as a dog groomer.

Mage's Bane by Chacelyn Pierce is a fun, sexy paranormal romance with fantasy elements.  With likeable characters, razor sharp dialogue and a good magical mystery, this book grabbed me from the first page.  Ms. Pierce's world building is solid, fairly unique and descriptive.  After reading this book, I wanted a Djinn of my own!

Aribelle "Ari" Delano is young, attractive and considered a rogue Akasha mage.  Unlike the other Akasha mages, Ari doesn't live at Haven, an Akasha like nunnery, and instead chooses to live out in the human world.  A rule breaker from her teen years, Ari is also the only Akasha in centuries capable of summoning Riaz, a powerful Djinni she's attracted to but bickers with like an old married couple.  When demons suddenly start targeting Ari, she suddenly finds herself having to depend on Riaz and having to choose between believing what she's been taught and what her gut tells her to do.

Riaz, Ari's Djinni, is an incredibly hot looking man with Fifth Avenue tastes in clothes.  Summoned by Ari when she was just a young teen, they've always had a love/hate type relationship.  Enjoying his verbal battles with Ari, Riaz has never been happy with any of the men she's dated and has let her know she has abysmal taste.  Not summoned for two years, Riaz is less than happy to have to help Ari locate some missing personal items that ended up in a dumpster.  As annoyed as he is with her for using him somewhat like a servant, there's no way he'll let a demon take out the Akasha he's tied to.

The scenes between Ari and Riaz are well written, their chemistry is evident from the first time they open their mouths - their bickering is a form of foreplay.  Forced to discover what's behind the sudden demon attacks, which they both know have been summoned by someone with some serious strength, they both have to learn to trust each other.  I really liked how Ms. Pierce developed both characters in this story, both Ari and Riaz have to learn to trust each other and learn to look beyond just what they see with their eyes.

The secondary characters are only partly developed but we get enough backstory on the residents of Haven to understand their roles in Ari's life.  While there are two villains in the story, it's only when one is revealed that we get a hint of what brought about the events in Ari's life.

Will Ari and Riaz be able to defeat the person responsible for unleashing the demon attack against Ari?  And will Ari and Riaz finally have a chance at a future together?  You'll have to read Mage's Bane to find out.  I really enjoyed this story and I think you will too.

Please fill out the Rafflecopter Form below to be entered in Chacelyn's giveaway.  You can follow her tour stops here.