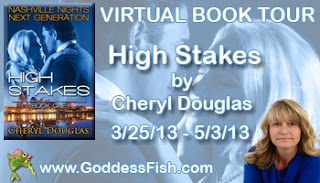 Welcome to my stop on Cheryl Douglas' Virtual Book Tour for High Stakes.  Please leave a comment or question for Cheryl below to let her know you stopped by.  Cheryl will be awarding awarding the following prizes to randomly drawn commenters during the tour:

You can follow her tour here, the more often you comment, the better your odds of winning.  My review for High Stakes will be posted later today.


Fourteen books in to the Nashville Nights / Next Generation series, you’d think I’d be ready to say, enough already. Not even close. I love these characters so much and I don’t think I’ll ever be ready to write THE END, but I know I must because another series, two in fact, are just waiting to be born.

Many authors shy away from writing a series because the task can seem daunting. I actually prefer to write sequential books, but I didn’t realize Shameless was going to be the first of many until I started the journey.

I may think a book is going to be a single title, but when I’m a few chapters in, secondary characters start to emerge and I think, he or she would make a great hero or heroine. Can you see where I’m going with this? My sub-conscious starts working over-time to fill in the blanks, and before I know it, another series is born.

Many authors have said that books often write themselves. We, as authors, are simply the channel through which these books are born. I think that’s especially true with a series, because you’re not focusing on the development of the secondary characters as much. You’re too busy focusing on the issues of the h/h, and the secondary characters are just free to be who they are. You don’t have to think about their voice, their motive or their history; they’re just allowed to be. In my experience, a lot of great characters are born of that freedom.

Of course with the ease and fun of writing a series, there’s also some trials and tribulations along the way. There have been a few times when one of my editors has said to me; hold on, that doesn’t sound like the so and so we met in book #4. I just can’t see him or her saying that, and I have to make revisions until that character is once again, being true to his voice. There’s also the challenge of trying to keep names, dates, ages, physical descriptions, and places straight in your mind as you write. I can’t pull myself out of a scene to check facts; it might disrupt the flow, so I have to hope that I’ll remember to revise it later, if necessary. Fortunately, I work with two editors, one proof-reader, and one Beta reader who are masters at catching my blunders.

I wrote a new book earlier this year that I assumed it was going to be a stand-alone title. Guess what? It’s going to be a six book series. The brother of the hero reared his handsome head in chapter one, and I quickly realized this is one deeply disturbed character my readers are going to want to get to a lot better… 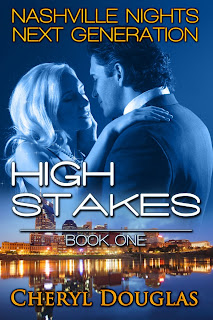 Former party girl, Alisa Turner, made a deal with her daddy, Trey. He’ll provide the seed money for her new business venture as long as she promises to stay out of trouble. Too bad her good intentions tumble 30,000 feet when she meets a sexy stranger on a flight to sin city.

Hotel mogul, Liam Bryson, has never believed in love at first sight, but when a sexy little siren twenty years his junior tempts him into a night of high stakes Blackjack, he’s suddenly playing for keeps.

Alisa wakes up in Liam’s bed the next morning, cursing Tequila and the five carat diamond on her left hand. She demands an annulment before her over-protective father finds out she reneged on their agreement, but her new hubby isn’t prepared to let her go without a fight.


“Good afternoon,” he said, beginning a lazy perusal that started with her bare, bronzed legs and ended where it had started, fixed on her eyes.

Alisa was too shocked by her physical reaction to his scrutiny to respond to the casual greeting. She was used to male admiration, but when a man was this obvious, she usually felt irritated, not warm and tingly all over.

His eyes zeroed in on her bare left hand, and he smiled, revealing a flash of white teeth and disarming grin so sexy it should have come with a warning label. No man had a right to be this handsome. It simply wasn’t fair to the poor unsuspecting girl seated next to him with no hope of defending herself when endless hours filled with nothingness stretched out before them.

“Your boyfriend must be crazy to let you travel to Sin City all by your lonesome.” His voice was low and raspy, filled with sexual innuendo and promise.

He licked his full lips as his intense eyes outlined her face. “Husband, fiancé… lover?” His voice deepened even more as he uttered the last word, sending thrill bumps skittering across her bare skin.

“No, no, and…” She drew a shallow gulp of air into her lungs, but the word still sounded breathless. “No.”

“Damn, I really need to fly commercial more often. I had no idea what I was missing out on.” He smiled again as he extended his hand. “Liam.”

She hadn’t expected his hands to be calloused or rough, and they weren’t. He was obviously accustomed to sitting behind a desk, and that suited her just fine. She loved elegant, refined men, and he more than filled the bill. “Alisa.” 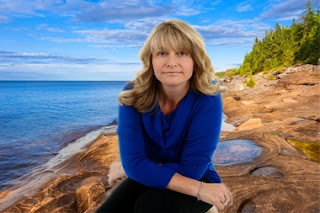 Cheryl began her professional career as a nutritionist, but her love of books started at an early age. She studied writing for many years before she decided to pursue her passion as a full-time career. After receiving constructive criticism from several well-known authors, Cheryl finally had the confidence to write her first romance novel.

The first book in the Nashville Nights series, Shameless, was a book that had been dwelling in Cheryl’s subconscious for years. For her, the surprise came when the manuscript began taking on a life of its own. Characters came to life, secondary characters became more prominent, outlines were forgotten, and a single title evolved into an eight book series, and another eight book spin-off series entitled Nashville Nights, Next Generation.

One word would aptly describe Cheryl: workaholic. She lives and breathes her writing, when she’s sleeping, watching TV, driving, reading… it’s always in the periphery of her mind. Her imagination rarely takes a holiday, even when she escapes to a sandy beach with her husband and son, she’s planning, plotting, outlining, and daydreaming.

Cheryl feels blessed to be able to get up every day and do something she loves. The thousands of fans who have embraced the Nashville Nights have made that possible. She writes for the readers who ask for more, she writes to satisfy the muse residing inside of her, but most of all, she writes because she couldn’t imagine doing anything else with her life. It took her thirty-seven years to decide what she wanted to be when she grew up, but now that she knows, she’s convinced she’s found her purpose.

Don't forget to leave a comment or question for Cheryl below to let her know you stopped by.  Cheryl will be awarding awarding the following prizes to randomly drawn commenters during the tour:

You can follow her tour here, the more often you comment, the better your odds of winning.  My review for High Stakes will be posted later today.
Posted by Maria D. at 1:30 AM