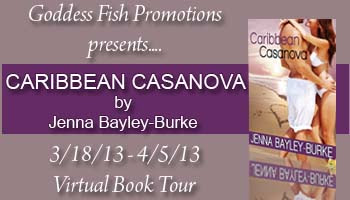 Welcome to my stop on Jenna Bayley-Burke's Virtual Book Tour for Caribbean Casanova.  Please be sure to leave a comment or question for Jenna below to let her know you stopped by.  Jenna will be awarding awarding a $25 Amazon GC to a randomly drawn commenter during the tour, and a second randomly drawn commenter will be awarded a $10 Amazon GC.  You can follow her tour stops here, the more often you comment, the better your odds of winning.

by Jenna Bayley-Burke
Under the Caribbean Sun, Book 2

Of all the islands in all the world, she’s come to his.

Under the Caribbean Sun, Book 2

Holly Hansen has sacrificed too much to let anything—especially a man—get in the way of making her clothing line a success. When she arrives on the island of Anguilla, she zeroes in on the biggest threat to her make-or-break photo shoot. At six-and-a-half foot of sculpted Dutch muscle, Harmannus Prinsen is every inch the womanizer of Caribbean legend, but he will not be seducing any of her models. She knows exactly how to make sure of it. Make the girls think he’s taken.

Harm is stunned when the curvaceous beauty greets him with a mind-numbing kiss. She’s the embodiment of every pin-up portrait he collected as a teen, with a sassy tongue and a body that begs for his touch. Sure, he’ll pretend to be her date…but only if they really date.

Despite her best efforts to remain immune to his charms, Holly finds herself falling for the man behind the myth. She begins to wonder which island she belongs on…Manhattan or Anguilla.


“I have half a mind to invite the entire boat of bikini models back to my villa for the night. Show them a true Caribbean good time.” Harmannus Prinsen crossed his arms over his bare chest and glared at his godfather’s approaching sailboat, annoyance pounding through him like rain from a hurricane.

He’d gone out of his way to help set up the photo shoot for Sassy, and the brat showed her appreciation by forbidding him to lay a hand on any of her models? As if he was hard up for female attention.

“Stop acting like you want to ruin this for her.” Joe stared at the boat in the distance and shifted from one foot to the other, like he couldn’t stand being in his own skin. Harm couldn’t recall seeing his younger brother so anxious. Probably because he wanted to crawl inside his brat of a girlfriend.

“I’m not going to ruin anything. I’m making this happen. I’m helping chauffer for her crew. I’m letting her use my rental bungalows for free. I’m even providing all the sporting equipment for her action shots. But I’m not putting up with her petty bullshit. I’m going to tell her where she can put her ultimatums. And if you weren’t fucking her I’d—”

“Hey.” Joe jabbed him with a sharp elbow but never took his gaze from the sea. The blue water was so clear the approaching boat seemed to be hovering over it. “I’m going to marry her. That makes her your family.”

“She always was family. Our godfather’s daughter.” He could not fathom how his brother thought of the red-headed waif as anything but an irksome child. He remembered the day she was born, for God sakes.

Joe lifted his gaze skyward and shook his blond head. “You both need to stop the childish squabbling. This photo shoot could launch her swimwear designs. That’s why she’s doing it here in Anguilla. She needs our help.”

“That’s your issue. I’m only here to tell her she can’t dictate who I can and can’t sleep with. My dick, my business.” Harm touched his jaw and a week of beard growth abraded his fingers. He only shaved on Sundays, before dinner at Dutch’s place. But since his godfather had been otherwise engaged this week, Harm hadn’t bothered.

“Then keep your dick out of her models. If you don’t want to do it for her, do it for me.” He lifted his arm overhead and waved at the boat.

Damn if Sassy didn’t brighten like she was lit from the inside. The way she looked at his brother was the only thing that kept Harm from throttling her. She’d been a pest as a kid, a nuisance as a teen and a thorn in his side from the moment his brother had realized she’d become an adult.

Harm fell in step beside Joe, helping to secure the schooner to the dock. Once Sassy and her models were delivered to the bungalows, he could wash his hands of the whole mess. Trouble disembarked first, leaping into his brother’s arms as if they’d been separated for years instead of weeks. He looked down and shook his head, hoping he’d get used to the sight eventually.

Something hot and solid crashed into his chest, the scent of honeysuckle surrounding him a second before the woman who pounced on him crossed her arms behind his neck and wrapped her legs around his hips. Harm grabbed her waist on instinct, looking into naughty hazel eyes fringed with long dark lashes.

“Play along,” she whispered through her wicked smile.

Her soft lips were on his in an instant, parting slightly to fit against his mouth. Who was he to turn down such a succulent invitation?

He opened and she responded in kind, the sweet taste of cinnamon making the kiss all the more delicious. He slid his tongue along hers and she sucked in a breath, her body tensing around him. She pulled back a bit, capturing his lower lip between her teeth.

He leaned in, wanting that mouth back on his. She denied him, releasing his lip and sliding down his body until her feet touched the dock.

“You need to shave, Casanova.” She winked, her mahogany eyes dancing with mischief before she turned and walked away.

As she made her way towards the bikini-clad women stepping off the boat, he tried to place her. She looked familiar, but not in a been-there-done-that way. He had a feeling he should know who she was, but for the life of him he couldn’t recall.

He looked to Joe for a clue, but he and Sassy were still attached at the face. No help there. But also no reaction. Had they missed the entire kiss?

His mystery woman herded the bikinis and their baggage to one side, the trio of scrawny men in head-to-toe black to another. Hadn’t they checked the weather before coming to the Caribbean?

Two hairless dudes in Speedos appeared on the deck from below, helping Saskia’s father, Dutch, hoist large black boxes off his boat. Harm stepped in to help, not wanting the older man to hurt himself. Manscaped One and Two he could care less about. He’d never understand the American abhorrence of body hair.

“Holly, we can’t possibly work today.” The scrawniest of the men in black leaned against luggage, his face flushed and shiny.

“The sunset shots will be brilliant tonight.” His new playmate spoke with an attractive air of authority.

Yes, they had met before, in a rather embarrassing way. 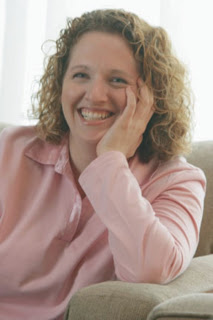 By day, Jenna is faster than a speeding toddler, stronger than a stubborn husband, able to leap tall Lego structures in a single bound...but by night, while the family sleeps she writes romance novels where no one ever has to scoop up after the dogs, change diapers, clip coupons, drive carpool, do laundry, mop floors, get silly putty out of hair, vacuum, empty the vacuum bag (gross!), exercise, count calories, apply Band-Aids, clean up puke...wait where was this going? Oh, Jenna writes romance because it is glamorous. Just ask the dogs. Catch up with Jenna on