Welcome to my stop on the Virtual Book Tour hosted by Reading Addiction Virtual Book Tours for Hit & Run Bride by Nana Malone and Misty Evans.  Please leave a comment or question for Ms. Malone or Ms. Evans to let them know you stopped by.  You can follow the rest of their tour here. 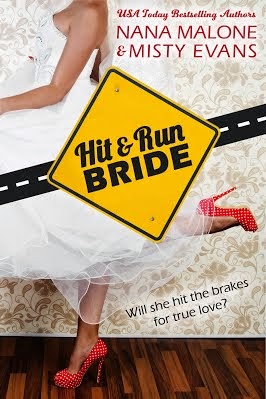 Marketing analyst Becca Daniels has a life that looks good on paper - a coveted promotion in an exciting new city and a successful, handsome fiancé. But with her Hawaiian honeymoon fast approaching, she has to face her biggest fear…water. She can’t swim. On her way to her first swimming lesson, however, she veers left instead of right and nearly runs over her hot, new instructor.

Liam Caldwell has put his life on hold to look after his sick mother. The last thing he needs is the hit-and-run brunette who ruined his motorcycle disrupting the adult swim class. But from the first lesson, he realizes there’s more to the curvy, smart-mouthed Becca than meets the eye, and no matter what he does, he can’t resist her luscious lips and her driving determination.

With each lesson, Becca discovers that what looks good on paper isn’t making her happy. Should she play it safe in the shallow end with her career and fiancé? Or should she dive into deep waters with a man who offers passion and freedom like she’s never imagined?

Understanding slowly dawned on her face. “I’m floating? All on my own?”

He nodded, and she froze. Down went her ass, and up went her arms, windmilling like before. This time, however, he was prepared. He swooped in with one arm and snagged her waist to keep her from sinking.

A repeat of their past chest-to-chest mamba occurred, only this time, she didn’t beat him with her fists. “I’m never going to swim, am I?”

He made sure she was steady on her feet, then headed for the edge of the pool. “Wait right there.”

He climbed out of the pool and grabbed a kickboard. On the way past the bench, he snagged her flippers. Back in the water, he lifted her up and sat her on the edge, then slipped the flippers on her feet.

“What are you doing?” she asked.

“Just hang with me.” After securing the flippers, he lifted her back into the water and demonstrated how to use the kickboard. He kicked back to her and handed her the board. “Your turn.”

Hesitantly, she fingered the board. “I don’t know about this.”

“I do.” He wrapped one hand around her arm and the other around her waist. “I’ve got you. Now do exactly what I did. Ready?”

She shook her head but held the board out in front of her. “Should I hum?”

“Should I hum? You know, like when you taught me to blow bubbles.”

He laughed. “Whatever rocks your world, Becca.”

She smiled. “Are you making fun of me?”

“Never.” He positioned her in the water, kept her from sinking. “Now kick those legs, hard.”

With his help, she scooted across the pool from one side to the other. Her face morphed into that self-satisfied look she got every time she accomplished something. She lowered her feet and nearly jumped up and down in the water. “I did it. I kinda, sorta swam!”

“Yep.” He enjoyed seeing that look on her face, and the bobbing up and down in the water wasn’t terrible either. “You did.”

“Oh, my God, thank you!” She threw her arms around his neck, bringing those luscious, wet curves into full body contact. Her flippers nailed his ankles as she tried to stand on his feet.

And then, without warning, she brushed his cheek with a kiss. “Thank you. I don’t know what to say.” She went to kiss him again, except he moved his face, and her lips, thank you, Jesus, landed on his.

They were wet and warm, and oh, so soft. When she didn’t pull away, he lingered there, tasting, and hoping she didn’t knee him in the balls.

Her body relaxed into his, her lips parting on a sigh. “I...uh…”

Pull back. Huge breach of teacher-student relations. His hands were one thing, supporting her in the water, but there was no way he should have his lips anywhere on her body.

But he didn’t push her away. No sir, Alex would have been proud. Liam wrapped his arms around Becca and kissed her again.

She responded, pressing her breasts against his chest. And then, like a light switch, she jerked away, putting distance between them.

“What am I doing?” she said, rubbing her fingers over her lips.

“I’m sorry,” he said. “That was completely unprofessional, and it will never happen again.”

Seemingly tongue-tied, she sputtered. Cleared her throat, and tried again. “It’s not you. It’s uhm...I, uh...I got excited, and sometimes I do really stupid things when I’m excited.”

Stupid things. Kissing him being one of them. Okay, then. Their time was nearly up. “One more time across?”

Swimming got in a person’s blood. He’d seen it a hundred times with the kids—and adults—he’d trained. Even the smallest taste of that kind of freedom made people long for more.

“That would be awesome.” Becca grabbed the kickboard and avoided his eyes. “I’m psyched.”

He was too. He only had to remember to keep his hands to himself.

USA Today Best Seller and iTunes Breakout Books author, Nana Malone's love of all things romance and adventure started with a tattered romantic suspense she borrowed from her cousin.
It was a sultry summer afternoon in Ghana, and Nana was a precocious thirteen. She's been in love with kick butt heroines ever since. With her overactive imagination, and channeling her inner Buffy, it was only a matter a time before she started creating her own characters.

While she waits for her chance at a job as a ninja assassin, in the meantime Nana works out her drama, passion and sass with fictional characters every bit as sassy and kick butt as she thinks she is.

USA TODAY Bestselling Author Misty Evans has published over twenty novels and writes romantic suspense, urban fantasy, and paranormal romance. As a writing coach, she helps other authors bring their books – and their dreams of being published – to life.

Her Witches Anonymous series was dubbed a Fallen Angel Reviews Recommended Read. The Super Agent Series, Witches Anonymous Series, and the Kali Sweet Series have been on multiple Amazon Kindle bestsellers lists. Her culinary romantic mystery, THE SECRET INGREDIENT, and the first book in her Deadly series, DEADLY PURSUIT, are both USA TODAY bestsellers.

Misty likes her coffee black, her conspiracy stories juicy, and her wicked characters dressed in couture. When not reading or writing, she enjoys music, movies, and hanging out with her husband, twin sons, and two spoiled puppies. Learn more and sign up for her newsletter at www.readmistyevans.com