Welcome to my stop on the Super Book Blast, presented by Goddess Fish Promotions, for Texting All Hearts Box Set by Bliss Brant, Lorelei Buckley, Debra Jupe, Darah Lace, Nese Lane, Linda LaRoque and Susan JP Owens.  Please leave a comment or question for any of the authors so that they know you stopped by.  You can enter their tour wide giveaway, for a $25 Amazon or Barnes & Noble GC, by filling out the Rafflecopter form below.  You can follow the rest of the tour by clicking on the tour banner above, the more stops you visit, the better your odds of winning. 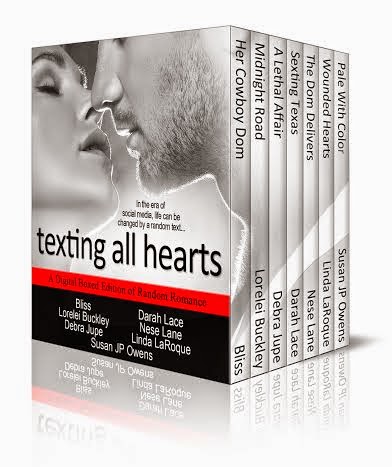 What do rodeos, otherworldly encounters, exotic dancers, bondage, hot sex, refound love, and time travel have in common? Besides romantic, edge of your seat fun and intrigue, they all evolve from a single text. Seven multi-genre novellas that promise to heat your nights and warm your hearts.

Her Cowboy Dom
By Bliss Brant

Tate Hardy’s best friend leaves him all his cattle if he spends thirty days on a ranch with a woman he wants but can't have. Jess is a nice girl, and Tate doesn't do nice. Jessica Campbell needs her brother’s cattle as collateral for a loan. To get rid of the sexy bull rider, she suggests he teach her about D/s. When he agrees, Jess gets more than she bargained for from her cowboy Dom.

Drew Mathews cherishes her deceased husband’s lingering spirit. When his best friend, Dominic, reveals her late spouse’s dark secrets, Drew's crushed. She turns to Dominic and neighbors for support and stumbles into a passionate love affair and a slew of bizarre commonalities restricted to the residents of Midnight Road. As mysteries unfold, inalterable conditions threaten her romantic relationship, her life, and possibly, the world.

A Lethal Affair
By Debra Jupe

With a rumored serial killer targeting exotic dancers, Daisy Piper is more than a little worried when her co-worker goes missing. Her concern escalates when a guy she’s never met shows up claiming her friend stole his laptop. A mild-mannered computer whiz on the surface, Miles Garton is a total contrast from the streetwise Daisy. But he’s on a mission of his own, making the jaded stripper suspicious. Fighting each other, a mutual attraction, and the truth, they team up to find the missing woman.

Texas Tallulah Taylor never thought she’d be turned on by a dirty text from a stranger, one that leads to a delicious sexting session with her best friend. Will Sanderson never thought the love of his life would see him as anything but a friend. Maybe sexting Texas will show her this cowboy aims to give her the ride of her life…for the rest of her life.

The Dom Delivers
By Nese Lane

He’s a Dominant, and she’s as vanilla as they come…
Designer Jenna Jaynes enjoys the safe bubble of her creative world, until her delivery guy bursts through and steals her heart. CFO Aden Kelley’s regimented world is thrown into chaos when a spitfire dressmaker captures his soul. Will the Dom convince vanilla to swirl?

Sarah Lawson's fiancé Logan Miller died in Afghanistan. She receives a text from Brandon Perdue, one of his war buddies, who wants to meet and deliver a message from Logan. Physically and emotionally scarred, Brandon values Sarah's friendship. Sarah wants their relationship to deepen, but he fears she's projecting her feelings for Logan on to him.

Cheyenne Clark doubts Captain Joseph Westerly’s beliefs about reincarnation, but a twenty-first century gal stuck in1862, during the Battle of Gettysburg, creates a new perception about philosophies and physics. After Joseph’s death, Cheyenne returns to her time period and anticipates his rebirth. Will Joseph find her?

Excerpt from The Dom Delivers by Nese Lane

Ayden threw his head back and laughed. “God, I love how honest you are about what you think and feel.”

The deep melodious sound of his amusement tightened things in Jenna’s core. She squeezed her thighs together and struggled not to squirm.

Kassie cleared her throat. “What can I get you two this morning?”

Ayden’s attention never left Jenna’s face and she chalked another brownie point in his favor. He raised an eyebrow in question. “I will leave the decision in the pretty lady’s hands.”

Jenna’s stomach growled. Her nerves had evaporated with Ayden’s appearance and her mouth watered at the thought of hot pancakes smothered in maple syrup with bacon. She giggled and placed two orders for exactly that, except she added a side of hash browns for Ayden.

When Kassie left to get their two glasses of orange juice, Jenna took in the smirk hovering around Ayden’s lips. “Okay, spill. What did I do now, to amuse you?”

His eyes flared with blistering heat for a second, and Jenna’s body trembled like he had a direct link to her erogenous zones. She pictured him tying her to the brass headboard of her bed, and watching her writhe under his talented hands with the same smirk gracing his handsome features. Where the heck had that thought come from?

Ayden’s intense gaze settled into a simmer, and he sighed. “Little one, I’m not sure amuse is the correct term. Intrigue, inspire, captivate, enchant…arouse. All of those things apply, but if I’m amused, it is with myself and how I feel like a hormone laden teenager hanging on your every word.”

Jenna’s face burned at the bald statement delivered in the sexy rasp of his deep voice. Her head spun, and she picked up a menu to fan away the flames. “Holy crap, Ayden. Are you for real? You don’t know me. How can you be so…”

He chuckled. “Sure? Let me let you in on a secret, little one. We have been getting to know each other over the past nine months. Now, I’ll tell you what I’ve managed to figure out. Would you like that?” 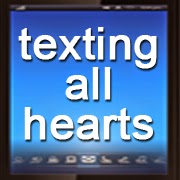 Linda LaRoque is a Texas girl, but the first time she got on a horse, it tossed her in the road dislocating her right shoulder. Forty years passed before she got on another, but it was older, slower, and she was wiser. Plus, her students looked on and it was important to save face.

A retired teacher who loves West Texas, its flora and fauna, and its people, Linda’s stories paint pictures of life, love, and learning set against the raw landscape of ranches and rural communities in Texas and the Midwest. She is a member of RWA, her local chapter of HOTRWA, NTRWA and Texas Mountain Trail Writers.