Welcome to my stop on the Super Book Blast, presented by Goddess Fish Promotions, for Exposed by Rage by Sherrel Lee.  Please leave a comment or question for Sherrel to let her know you stopped by.  You can enter her tour wide giveaway, for a $15 Amazon/B&N GC, by filling out the Rafflecopter form below.  You can also follow all of the tour stops by clicking on the banner above, the more stops you visit, the better your odds of winning. 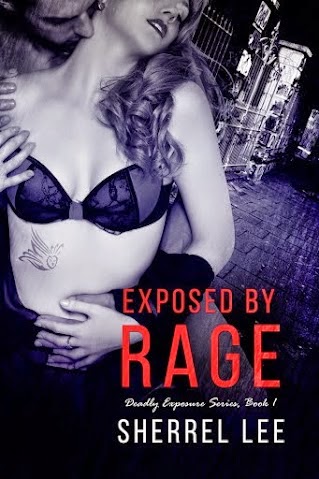 Exposed by Rage
By Sherrel Lee

He has a dead body.  She has the seedy connections. To solve the crime they are forced to work together.

Braden broke the silence first.  “So the door to the bedroom was open just enough to allow you to take a peek?  Nothing looked out of order?”

The silence got to him again.

“So you just walked in last night, went straight to bed,” he sneered.  “Didn’t notice anything was wrong.”

“I didn’t pass her door.  I didn’t have to.  I told your partner the exact same thing thirty minutes ago.”

Braden gave a desperate, evil laugh.  I wanted to punch the smirk off his face.

“I was tired.  I had the key Jillie sent me.  I know where my room is.”  Cops are not my favorite people and this one was beginning to get on my nerves.  I know the routine.  I know they have to ask questions.  I would be just as snide and disbelieving if I was the one doing the questioning.

“Braden,” DeMarco, his partner called from the hallway upstairs.  “Leave her be.  I need you to come up here and make sure Mathews doesn’t miss anything.”  I glanced at Braden’s partner, approving his wide shoulders, narrow hips and the ripple of muscles that couldn’t be contained by the suit jacket. Too bad he was with the police, we could have danced dirty and had a few laughs.

Mathews must be the crime tech I’d seen coming in through the kitchen.

Wrangler of a fearsome Yorkiepoo named Rogue (Half Yorkie half Poodle weighing in at a hefty eight pounds). Obsession controlled writer with a passion for making up names and twisting myths.

Sherrel, as the daughter of an Emmy winning cameraman, learned early in life the dark secrets of creating all those incredible fantasy characters for the large and small screen.

Refusing to be crushed at the discovery the monsters, aliens, and Robby the Robot weren't real, Sherrel's imagination soared. She became a SELF-proclaimed voyeur of special-effects and expert at fictional character creation.