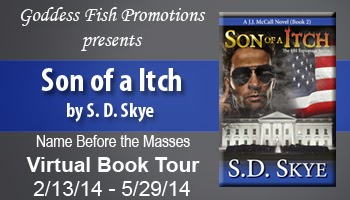 Welcome to my stop on author S.D. Skye’s Virtual Book Tour for Son of A Itch, presented by Goddess Fish Promotions.  Please leave a comment or question for Ms. Skye to let her know you stopped by.  You can enter her tour wide giveaway (Sorry – U.S. only) by filling out the Rafflecopter form below.  You can also follow the rest of her tour here, the more stops you visit, the better your odds of winning.

From Working in Intelligence To Writing Suspenseful Thrillers - How I Made the Leap by S.D. Skye

How I fell into writing is really a miracle to me. Since I was a kid, I’ve loved reading and I’ve loved writing. I’ve kept diaries and journals from an early age, many of which I still have today. But I never really connected my love of writing…and becoming a writer. Never made the connection. Never imagined for one second that that a major publisher would ever buy my book and publish it, or that I would walk into a Walmart and see my name and book on a shelf. For me, writing had always been a means of escape. When my world was going topsy-turvy, I could grab a journal and pen and write away the tornado of emotions going through me. It’s funny because if you ever read my journals, you’d think I never had a happy moment in life, I only wrote in them when something had gone wrong. I didn’t share too many happy moments.

Anyway, this love of writing got me excellent grades in school and college and helped land me my first real job…a government job with the FBI. I started as a File Clerk in a unit responsible for supervising Interstate Theft investigations.

Well, you know how on The Sopranos, the mafia soldiers used to steal tractor trailers and fence the goods? Yep, that’s what my unit did. It was my first exposure to organized crime investigations and La Cosa Nostra. After about a year, I was moved to the National Stolen Art program in which I did some really cool stuff—even had 15 seconds of fame on 60 Minutes with Morley Safer. Then I applied for a job as an Intelligence Analyst. Well, Intelligence Research Specialist—same diff. And that’s what I would do for the next 8 years of my career. I started in the Russian program and ended in the Russian program, but I always had a feeling in my gut that intelligence work wasn’t where my career should end. I had the unsettled feeling that I wasn’t doing what I was supposed to be doing. So I took a job contracting, thinking I could try a bunch of different things until I figured out what my calling was.

For the next 8 years, I would bounce around to a variety of positions. I took one on the Joint Staff working for DIA. I used to write briefings and newsy type articles for senior Pentagon and U.S. government officials. My first assignment was writing the “POTUS” brief. I had no idea what a POTUS was as I’d never had to use the acronym. For a month I wrote briefs for the President and had no idea who my customer was. (True Story). I ended supporting Iraq War intelligence efforts. Left there and took positions with U.S. Coast Guard Intelligence and finally the Director of National Intelligence before I figured out that while I’d had an amazing career, this wasn’t my calling.

In the midst of all this I tried real estate, loan origination, and publishing my own community newspaper. All major #FAILS in that they didn’t settle the feelings I had inside.

It wasn’t until after a major break-up someone who I thought was “the one” that I discovered my true gift was writing and I was meant to be a novelist. In the midst of my depression, I found my old friend again—writing—and I wrote what I knew. Heartbreak…but in that hysterically funny way. And this time I turned my feelings and emotions into a work of fiction. I’d never worked so hard to finish anything in my life, yet I’d also never worked so hard at something never for one single second felt like work. And we’re talking 12-14 hour days (on the weekends).

After four months, it was done. I spent a year editing it and trying unsuccessfully to find a literary agent before I self-published it. Four months after I released it, it was discovered by the editor of a major publisher and ended up as part of a 2-book deal with Simon & Schuster. My very FIRST EVER attempt at writing a novel. If that wasn’t a sign from God that I was a writer, I don’t know what was.

After writing two mildly successful rom-coms, once again I felt restless. The name J.J. McCall came to me in a dream and somehow I knew that I was meant to turn all those years of experience in the intelligence field into a series featuring this character. So, that’s what I did. Had no clue about how to write a spy novel. I just wrote the story as it came to me. And I’m excited to see where this character and this series will end up.

So the leap from Intelligence to Writing certainly wasn’t a planned one. Nor was it expected. But I sure feel like I stuck the landing. I love writing books. And whether I write 10 books or a million, I know it’s what I’ll spend the rest of my life doing. I guess my life lesson from all of this is that if you have an unsettled feeling like you’re not doing what you’re supposed to be doing—then you’re probably not doing what you’re supposed to be doing. Find out what your gift is, tap into it—and then LEAP! 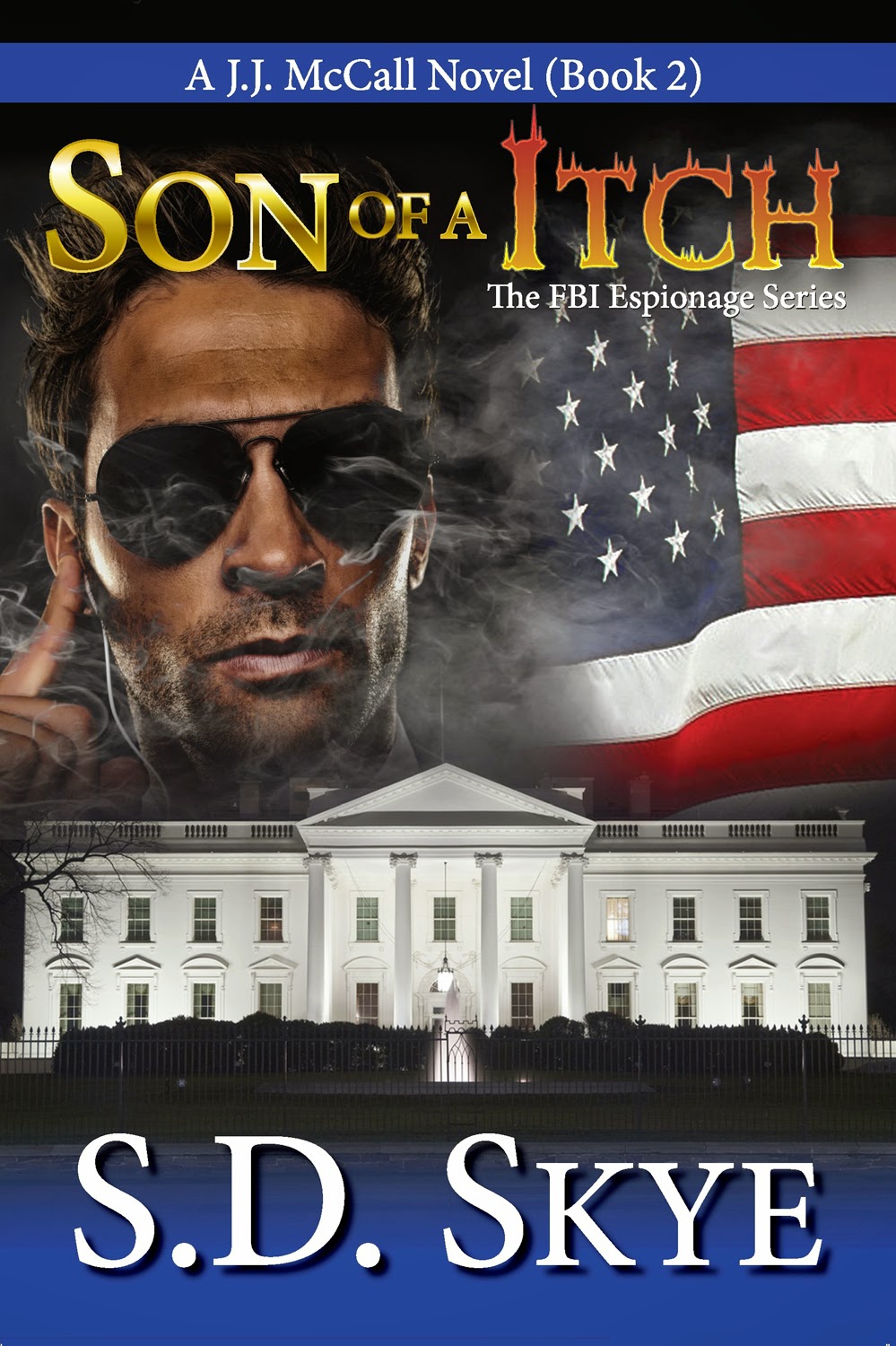 On the lam from the FBI, the ICE PHANTOM continues with plans to defect to Moscow but not before seeking revenge on J.J. McCall. Meanwhile, the FBI commences Task Force PHANTOM HUNTER, a team ordered by Director Russell Freeman to track down suspected Russian illegals within the U.S. Intelligence Community—and not a moment too soon. An agent of the Russian Intelligence Services is targeting the nerve center of U.S. national security, taking the lie-detecting FBI Agent and her cohorts’ next mole hunt to the highest echelons of the U.S. government.

J.J. and her co-case agent lead the motley crew of spy catchers while she struggles to deal with sobriety, conflicting feelings for Tony and Six, and an egotistical Secret Service agent whose jurisdictional stonewalling complicates her every effort to identify the culprit before he gets away—with murder.

Tony’s wannabe girlfriend bounced in the door with all the cheer of a drunken valley girl, gazelle graceful in her four-inch stilettos and body-hugging cranberry-colored pantsuit. After flipping her irritatingly thick Pantene hair behind her shoulder, she smiled and sang a bright, “Good morning!”

J.J. grabbed a handful of chocolate with the quickness of a hungry toddler. “Gia, you made it,” J.J. replied in a flat tone, offering a polite but grudging head nod. Her ears and cheeks warmed as she soundlessly growled and narrowed her eyes. “Please make yourself comfortable,” she said as the words “on Mars” flitted through her mind. She stuffed a handful of M&Ms in her mouth and waited for the next arrival.

“Wouldn’t miss it for the world,” Gia replied, carefree and nonchalant, full of herself because in the contest for the heart of Tony Donato, she’d scored a major victory over J.J. by all appearances. A flirtatious grin edged the corners of her lips upward when Tony arrived seconds later, in all his muscled Italian glory. A towering hunk of olive-colored fine. Her voice bounced as she sang, “Ciao, Signore Donato.”

Show off, J.J. groused as she shifted in her chair, cocked her head to the side and shook it in disbelief at Gia’s shameless pandering. J.J. had sensed an attraction between the two. Her fears were confirmed by Tony’s first lie.

S.D. Skye is a former FBI Russian Counterintelligence Program Intelligence Analyst and supported two major programs during her 12-year tenure at the Bureau. She has personally witnessed the blowback the Intelligence Community suffered due to the most significant compromises in U.S. history, including the arrests of former CIA Case Officer Aldrich Ames and Robert  Hanssen. She spent 20+ years supporting military and intelligence missions in the U.S. Intelligence Community.

Skye, an award winning author, is a member of the Maryland Writer’s Association, Romance Writers of America, Sisters in Crime, and International Thriller Writers. She’s addicted to writing and chocolate—not necessarily in that order—and currently lives in the Washington D.C. area with her son. Skye is hard at work on several projects, including the next installment of this exciting series.