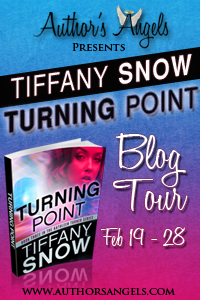 Welcome to my stop on Tiffany Snow's Virtual Blog Tour for Turning Point, the third book in The Kathleen Turner series. Please make sure to leave a comment or question for Tiffany to let her know you stopped by. Tiffany will be awarding one lucky commenter at each stop on her tour either a Kindle or print copy of one of her KATHLEEN TURNER books (Winner's choice, Print copy is Cont US only) . You can fill out the Rafflecopter form below to enter her Grand Prize giveaway.

Short Interview for Queen of the Night Reviews


Thank you to Queen of the Night (great song, btw) for hosting me on the blog tour for TURNING POINT, the third book in The Kathleen Turner Series. There will be a total of five books in the series. Book four, OUT OF TURN, will be released on 12/17/13.

Maria: How do you keep characters fresh in a series?

Tiffany : I think the key to keeping characters fresh is not to make them static – they have to grow, change, mature, evolve. Kathleen Turner begins as a very young, very naïve woman in NO TURNING BACK. She’s sweet, kind, and trusting. Sometimes a little too trusting, other times, not enough. The men, Blane and Kade, are also in a different place in book one than we see them at the end of book three. Their relationships with each other changes all of them, and the events that unfold impact their lives and who they are. One of my goals in writing Kathleen Turner was to see how she changes and becomes through the five-book series.

Maria : How strong should a Romantic Suspense heroine be?
Tiffany: That depends on your character and what you want to write. I wasn’t planning on Kathleen being a leather-clad badass in stilettos. She’s rather…normal. I wanted her to be someone readers could relate to, be it as themselves or if they saw her as a friend, a neighbor, or a sister. Strength also comes in many forms, not just physical. Kathleen has a strong moral fiber to her, a pervasive sense of justice, and the internal strength it takes to be caregiver to her mother before she died then pick up stakes and move to a place where she knew no one, to try and make something of her life. It’s who Kathleen is on the inside that affects the two men in the story, Blane and Kade, more so than any ass-kicking she may deliver to the bad guy.

Tiffany : Well, I don’t know any real life female investigators, so I can’t properly compare and contrast Kathleen, but the books are fiction and fiction takes liberties. Whether or not your reader will allow you some that’s-not-100%-true-to-life moments or not is up to them. I always say, if you want 100% believable, watch the news (and honestly, half the time the truth is stranger than fiction). While I try very hard (as I’m sure most Romantic Suspense writers do) to make sure the plot and events are as realistic as possible, in the end it’s meant to be entertaining. And if I’ve entertained someone for a few hours, gotten them to live in my world and enjoy the ride, then I’ve done my job. 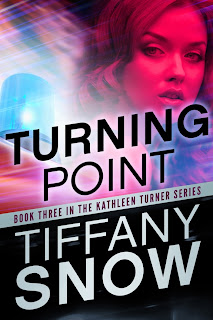 After her promotion from law firm Runner to Investigator, Kathleen Turner is learning the ropes of her new job from none other than assassin-for-hire Kade Dennon, a situation her boyfriend Blane Kirk is none too happy about. But the lessons with Kathleen take a back seat when Kade becomes a target. Previously untouchable, his enemies now know of the chink in his armor – his brother’s girlfriend.

And Kade’s not the only thing coming between Kathleen and Blane. From Blane’s inexplicable defense of a man guilty of a horrible crime, to a mysterious stranger from Kathleen’s past, to Kathleen’ risky investigation into human traffickers, the obstacles mount against a relationship that’s just begun to find trust again.

While Blane considers a job offer that would take him back to the front lines in the war on terror, Kathleen is determined to pursue her new career, with or without his approval. Unfortunately, her current case is far more dangerous than anyone knows. Someone close to Blane will go to extreme lengths to split them up, lengths that may prove worse than death for Kathleen.

Kathleen, Blane and Kade must atone for the sins of the past and the present. The fallout will force Kathleen to a turning point…in her career, and her life.


a Rafflecopter giveaway
Posted by Maria D. at 12:30 AM