Waiting On Wednesday - Casanova in Training by Aliyah Burke 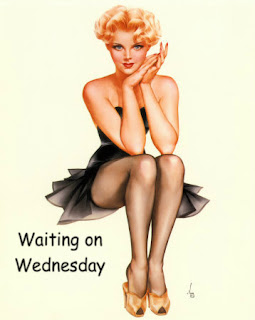 "Waiting on" Wednesday is a weekly event hosted by Jill at Breaking the Spine which highlights upcoming release we are eagerly anticipating.

This week's pre-publication "can't-wait-to-read" selection is Casanova in Training by Aliyah Burke.

About Casanova in Training:

Book one in the In Aeternum Series

A woman who is all about rules and a man who lives to break them, their scorching passion threatens all they hold dear. Can they find a way to have it all?

Lieutenant Commander Giovanni 'Casanova' Cassano is a top test pilot for the military, and is the epitome of an ace. Cocky, arrogant, handsome, and true to his call sign. His best friend's death brings a new pilot to his squadron—a woman. That's not even the real reason it's hard—she's the one who left an indelible imprint on his soul after a twenty—four hour rendezvous. Now she seems to have ice in her veins, not the fiery passion he knows rages beneath the surface.

Jaydee 'Dusti' Amos is following orders, and this time they have landed her at a test facility. She's there to ascertain what caused the deadly B—2 crash. The situation becomes harder once she discovers who is stationed there—the one man she never believed she'd see again after their impulsive and passionate encounter. He pulls her focus from the job at hand and tends to make her break the stringent rules she lives her life by.

They work together to unveil the truth and the feelings between them deepen. But there is a traitor in their midst. Will the fallout tear them apart, or will Gio find some way to convince Jaydee to give him a chance at forever?

Reader Advisory: This book is part of a series but can be read as a stand alone and in any order.


Why I'm Waiting For This Book:


I've read several books by this author before and I've enjoyed them.  Ms. Burke has a knack for writing characters you can fall in love with and great Alpha heroes.  She also writes realistic interracial romances and doesn't shy away from tackling problems facing interracial couples today.


What's your "waiting on" pick this week?

Want to play along? Just post your WoW entry on your blog and leave your link at Breaking the Spine and below.