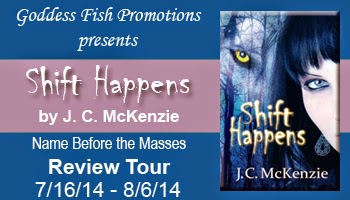 Welcome to my stop on the Review Tour, presented by Goddess Fish Promotions, for Shift Happens by J.C. McKenzie.  Please leave a comment or question for J.C. to let her know you stopped by.  You can enter her tour wide giveaway, for an autographed print copy of her book along with a $25 Amazon GC, by filling out the Rafflecopter form below. You must comment in order to enter the giveaway.  You can also follow the rest of J.C.’s tour here, the more stops you visit, the better your odds of winning. 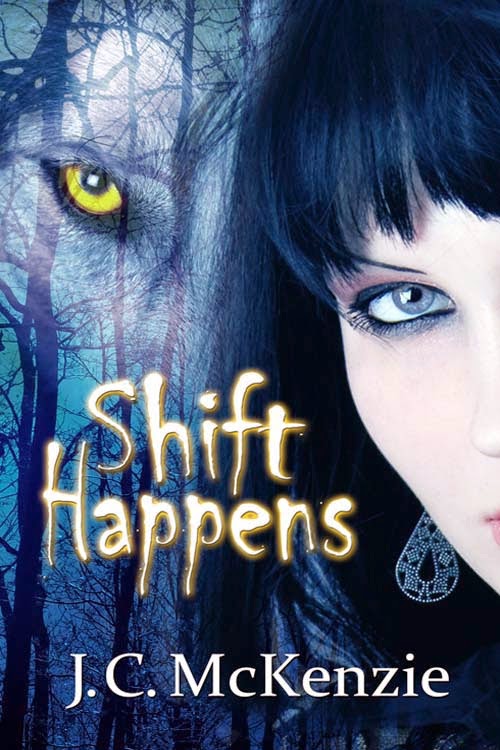 Andrea McNeilly's job as a government agent is not asking questions, but then a routine assignment turns into a botched assassination of a Master Vampire's human servant. Answers become a priority. Her search to discover the truth is riddled with obstacles, the largest being an oversized Werewolf who resembles a Norse god. Andy can't afford the distraction he offers, because if she fails, she faces eternal enslavement.

Wick's job is to monitor Andy, but he prefers more intimate activities, none of them G-Rated. His choices, however, are often not his own. His ability to help Andy is limited by his bond to the Master Vampire.

Facing many trials and challenges along her path to redemption, Andy learns the value of her freedom might be set too high.

A large black wolf trotted into the clearing to confront me. He had a white-tipped snout, white boots and mitts and would have looked cute had he not been the most intimidating Werewolf I’d ever seen. Standing tall and solid, power rolled off of his body. His eyes bore into mine. I sniffed the air. The strong Werewolf scent of rosemary swirled around me, strong and seductive, laced with sugar. A weird fuzzy sensation spread out from my chest. Whoa.

My other form growled low, demanding release, straining against my skin. The energy of the wolves built—layers upon layers of excitement and impatience. The air pulsated with anticipation. They could sense the imminent kill.

Let me out! My other form repeated, throwing her power against my built up walls, howling in defiance.

When the energy of the Werewolves surged, I finally released her. My wolf form flowed out fast, wiping out the feline in little more than a heartbeat. Smaller, weaker and the size of a natural wolf, a Shifter in this form was no match for a Werewolf, especially a dominant one. I had time to meet the eyes of the Alpha for only an instant before the pack leapt forward. My limbs shook. It went against every instinct ingrained within me, but I rolled onto my back—submissive. 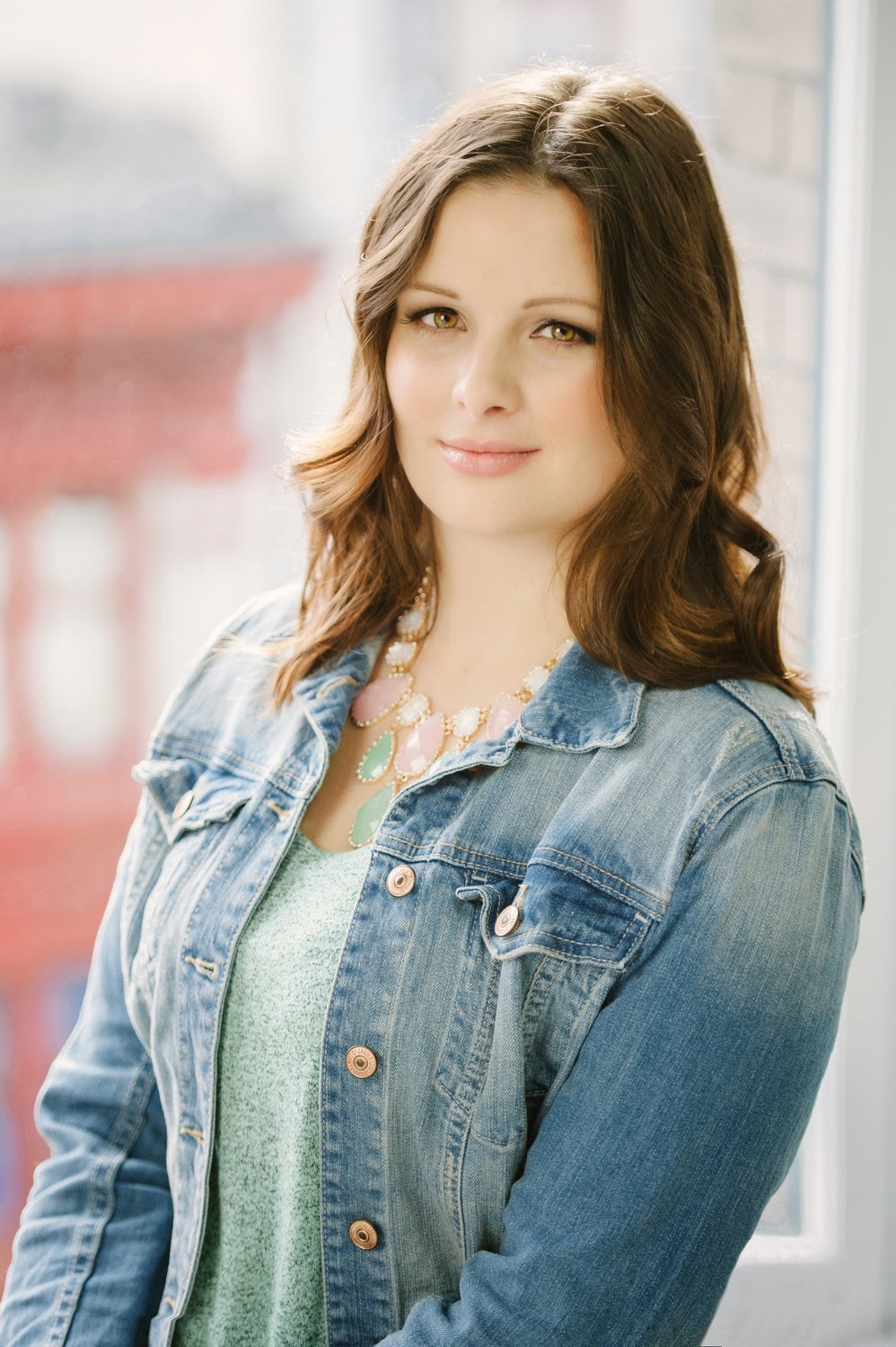 Born and raised on the Haida Gwaii, off the West Coast of Canada, J.C. McKenzie grew up in a pristine wilderness that inspired her to dream. She writes Urban Fantasy and Paranormal Romance.

A world with supernatural beings out in the open, an assassin who doesn’t know what she is and an Alpha werewolf charged with keeping her prisoner take center stage in J.C. McKenzie’s debut release, Shift Happens.  The first book in her Carus series, Ms. McKenzie has built an interesting world where humans, vampires, shapeshifters, witches and all sort of other paranormal characters co-exist and attempt to get along.  Good dialogue, plenty of action and a sexy romance kept me turning the pages to discover what would happen next.

More than a shapeshifter, Andrea McNeilly never knew her birth parents and really doesn’t know what type of “supernatural” being she is.  Able to shift into three different forms, mountain lion, hawk and wolf, she works for the Supernatural Regulatory Division of the government as an assassin taking down whoever or whatever the government requires.  Assigned to kill a norm (straight up human), she soon finds herself on the wrong side of a Master Vampire and a pack of werewolves forced to do his bidding because they are his animal to call.  Ms. McKenzie does a good job developing Andrea; she’s smart, strong and determined – three personality traits that help her accomplish her job.  She’s also sexy, confused about her heritage and terrified of being forced to do anything against her will.  Something that is both a strength and a weakness.

An Alpha werewolf in charge of a pack, Wickard or “Wick”, is forced to do whatever the “Master Vampire” decides.  Neither he nor his pack want to follow the vampire’s instructions but they are his “animal” to call and have no say in the matter.  Capturing the assassin who killed the vampire’s human servant is his duty, falling in love with her and discovering she might be his mate is completely unexpected.  Ms. McKenzie also does a good job developing “Wick’s” character; he’s physically and mentally strong, sexy as heck and tired of being a pawn to a creature he detests.  He’s also responsible for others and takes his duties seriously.

The secondary characters are well developed and I really enjoyed getting to know members of Wick’s pack, especially Ryan, his second, and Jess and John, a mated pair, who help Wick watch over Andrea.  I also found both Lucien, the Master Vampire, and Allan, his second in command, interesting in their own way.  Ms. McKenzie does a good job with the world building and the plot is well paced.  The attraction between Andrea and Wick is hot, sexy and a real surprise for Andrea.

Will Andrea discover why she was sent to kill the human servant of a Master Vampire before he decides to end her life?  Will Wick and Andrea’s hot and off the charts attraction get a chance to become something more?  You’ll have to read Shift Happens to find out.  I really enjoyed it and look forward to reading the next book in this series.