Welcome to my stop on the Virtual Book Blast, presented by Goddess Fish Promotions, for Cinderella & Prince Dom by Sydney St. Claire.  Please leave a comment or question for Sydney to let her know you stopped by.  Sydney will be awarding a $25 Amazon GC to a randomly drawn winner via rafflecopter during the tour, which you can fill out below.  You must comment in order to enter the giveaway.  You can also follow the rest of Sydney’s tour here, the more stops you visit, the better your odds of winning. 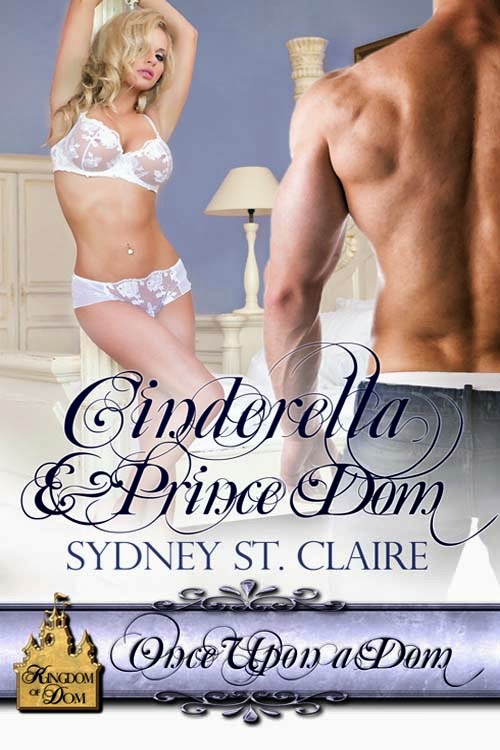 Cinderella & Prince Dom
By Sydney St. Claire
Once Upon A Dom, Book 1

Jaimie Newberry is jobless, her rent is due, and her cat just died. On top of that, she was accused of embezzling before she was fired. When her friend invites her for a weekend of kinky fairytale role playing, she agrees to go as Cinderella. What has she got to lose when sex with a handsome prince is involved?

“Does it matter if she is as guilty as the others?”

Bryce nodded. “Yes. If she was part of it, I’ll press charges. No one steals from me.” He’d already gotten confessions out of the rest of his employees and fired those who were supposed to oversee that department. Fools were more concerned with their ladder climbing and brown-nosing instead of doing their job.

Determining Jaimie’s level of involvement was unfinished business. Was his Cinderella truly innocent, or had she been framed? He couldn’t find any money trails leading to her bank accounts, but that didn’t mean she didn’t have money squirreled away elsewhere, under another name. No, he needed to know for sure.

Glorie laughed low in her throat. “My, your little playmate looks ready to bolt, and it’s not even midnight.”

Bryce narrowed his eyes. Glorie was right. Jaimie was staring at some of the costumes with mouth agape. He couldn’t see her eyes but imagined they were wide with shock. Even from where he stood, he could see her face was flushed with embarrassment. She took a big gulp of her champagne then grabbed Lucy by the arm. Though he couldn’t hear the conversation, it was clear his sub was having serious doubts.

Sydney St. Claire is the pseudonym of Susan Edwards, author of 14 Historical Native American/Western/Paranormal romances and the author of the popular "White" Series. During her career, she has been nominated for the Romantic Times Career Achievement Award for Western Historical and Reviewer's Choice Best Book Award.

Sydney loves writing and sharing stories of love, happiness and dreams come true with her readers. She credits her mother for her writing as she was encouraged to read as a child and preferred happy endings which meant romances were her favorite genre. When the writing bug bit, she followed the sensible advice to “write what you know” and has been writing and publishing her stories since!

Sydney takes her readers into the world of erotica romance where her characters come together in explosive passion as they solve life's problems and find true love along with the best sex our hero and heroine have ever experienced.

Sydney resides in California. Her office is quite crowded with two small dogs at her feet, another huge girl in her recliner and five cats to keep her company while she writes. Three cats always insist on beds on her desk, barely leaving enough room for her monitor and keyboard. Life gets fun when all five insist on supervising...

When not writing, she enjoys crafts of all sorts including quilting, sewing, cross-stitch and knitting. Knitting and crochet are her current passions. She and her husband of 30 + years are avid gardeners. He takes care of the veggies, and Susan is in charge of the 'pretties'. Her medicine wheel garden is in a contact state of war: flowers vs. weeds. Sadly, right now the weeds are wining...

Camping, fishing, biking and hiking (when not hot) are other outdoor pursuits she and her husband enjoy. She is of course, an avid reader and hates cooking and housework. While writing, she listens to a wide variety of music, including Neil Diamond, Celtic, Native American, New Age, Classical, and mood music (bagpipes and howling wolves drive my family nuts). Her current favorites are Blackmore's Night and David Lanz.