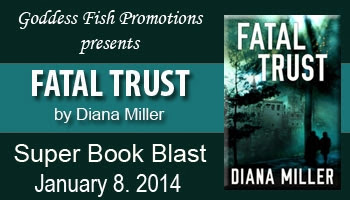 Join author Diana Miller, on her Super Book Blast for Fatal Trust, presented by Goddess Fish Promotions, on January 8, 2014.  Please leave a comment or question for Diana to let her know you stopped by.  Diana will be awarding a $25 Amazon GC to one randomly drawn commenter during the tour.  Please be sure to leave your email address with your comment.  You can follow the rest of Diana’s tour stops here, the more often you comment, the better your odds of winning. 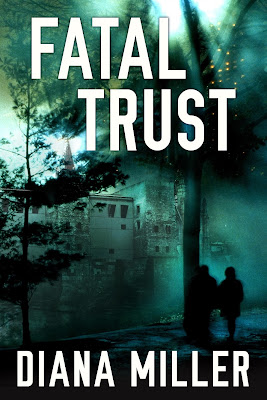 Stepping her perfect Jimmy Choos into place beside Ben Gallagher’s wounded Nikes, straitlaced Philadelphia lawyer Catherine Barrington is surprisingly unable to resist the disarming small-town mechanic’s charm. He’s one of the heirs to the vast fortune left by his eccentric grandfather Max, a bestselling horror writer, and she’s there to carry out Max’s last wishes. Routine enough…except that inheriting comes with a catch: none of Max’s heirs will get a penny until they’ve lived together for two weeks in the shadow-filled rooms of his mansion in the wooded hills near Lake Superior.

From beyond the grave, a letter from Max insists that his death was no accident, sending Catherine undercover—and way out of her comfort zone—to catch the killer. Posing as Lexie, Ben's cocktail waitress girlfriend, Catherine soon finds herself trapped with the feuding clan at the sinister Nevermore manor. To save her own life, she’ll have to confront the murderer, as well as her growing attraction to Ben—a top suspect.

Ben draped an arm around Catherine’s shoulders, pulling her against his side. He smelled like pine soap, which surprised her. She’d expected some men’s cologne with a virile name and an overdose of spice and musk. “Why don’t you get me another drink, Lexie? She’s a cocktail waitress,” he told Cecilia.

That’s right—she was supposed to be Lexie the cocktail waitress. Catherine gave him a tight smile. “I’m off duty.”

“I promise I’ll make it worth your while,” Ben said, his voice lowered suggestively.

She was also supposed to be crazy about him, so instead of telling him where to stick it, she raised her chin. “I came out here to give you emotional support. Not to wait on you.”

“Good for you, Lexie,” Cecilia said. “Ben always dates twits who do whatever he wants. He needs someone who’ll stand up to him.”

Ben sighed as if he’d been ordered to haul stones across the Sahara for a new pyramid rather than his own glass across the room for a refill. “With the two of you ganging up on me, I guess I’ll get my own drink.”

“Bring me a glass of cabernet while you’re at it,” Cecilia called after him.

The words came from the man who’d just stumbled into the parlor. His light brown hair was all wild wisps and spikes, one sleeve of his suitcoat was torn, and his shirt had been pulled from his trousers.

And he was covered with blood.

“They came out of the trees,” he wheezed out. “I couldn’t stop them. I tried, but I couldn’t.”

“Help me.” His voice was just above a whisper. “Please.”

Then he collapsed in a bloody mess on the parlor floor. 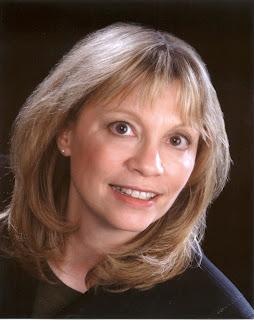 When she was eight, Diana Miller decided she wanted to be Nancy Drew. But no matter how many garbage cans she dug through, conversations she “accidentally” overheard, and attics she searched, she never found a single cryptic letter, hidden staircase, or anything else even remotely mysterious. She worked as a lawyer, a soda jerk, a stay-at-home mom, a hospital admitting clerk, and a conference host before deciding that the best way to inject suspense into her otherwise satisfying life was by writing about it.

Diana is a five-time nominee for the Romance Writers of America Golden Heart Award, including for Fatal Trust, and won a Golden Heart for her debut novel Dangerous Affairs. She lives in the Twin Cities with her family.

Don't forget to leave a comment or question for Diana to let her know you stopped by.  Diana will be awarding a $25 Amazon GC to one randomly drawn commenter during the tour.  Please be sure to leave your email address with your comment.  You can follow the rest of Diana’s tour stops here, the more often you comment, the better your odds of winning.
Posted by Maria D. at 12:30 AM