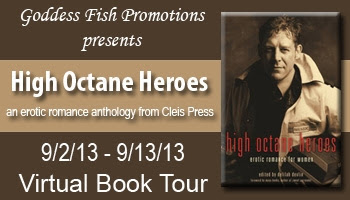 Please welcome the authors of the High Octane Heroes Anthology on their Virtual Book tour from
September 2 – September 13, 2013.  Tamsin Flowers is the featured author for my stop on this tour.  Please leave a comment or question to let her know you stopped by.  Please make sure to leave your email address with your comment to qualify for the tour wide giveaway.  You can follow the tour here, the more stops you visit, the better your odds of winning.

Me:   What is it about an alpha hero that attracts you to writing high action romance stories?

Tamsin: When it comes to alpha heroes, what's not to like?  The attributes needed for an alpha hero are, I would say, universally attractive - strong and silent, rugged good looks, rippling muscles, a strong moral compass, a willingness to get involved and help others, compassion for vulnerable women, children and animals, a hatred of injustice or unfairness…  Need I go on?  Of course, by writing about them, I get to spend time with these fabulous fellows - and they're often far more complex than we suppose.

Me:  What real life hero inspired your story or inspired you to write an action hero story?

Tamsin: My story in the High Octane Heroes anthology is called Mountain Man and, as you might have guessed, the hero is a member of a mountain rescue team.  I've done some mountaineering when I was younger and most of the men in my family still do climb and hike for recreation.  Thankfully, we've never needed the services of the mountain rescue, so I didn't write my character with a particular real life hero in mind.  Let's just say he's a tribute to all the men who volunteer in mountain rescue teams everywhere, bringing down lost and stranded climbers from the rock face, sometimes in extremely dangerous conditions.  Unlike most emergency services, the majority of them are unpaid volunteers who will leap out of bed in the middle of the night to go up a cold mountain to help a stranger in trouble.  Inspirational or what?

Me:  If comic book heroes were real, which one would be your favorite?

Tamsin: I've always had a bit of a thing for Spiderman but now I'm sitting here and thinking about it, I couldn't tell you why.  Maybe it's because he's such a cool dude in contrast to his daytime alter-ego or maybe it has something to do with the catchy theme tune to the cartoon I used to watch when I was a kid…  Spidey, if you're reading this, I wouldn't mind tangling in your web!

Me: Action heroes are always fighting something - whether it's a villain, a dangerous situation (such as a fire) or injustice of some kind.  Why does society continue to need them as time continues to advance and we continue to gain knowledge?

Tamsin:  Ooh - deep question… I think we all like to feel, deep down, that there's someone out there who's strong enough to fight in our corner when the going gets tough.  Every civilization has had its heroes, both real life and fictional, and I don't think that will ever change, no matter how much our civilization advances or how much knowledge we have.  There will always be bad things that happen - whether caused by natural disasters or the villainy of man - and we want someone e can turn to when we need them.

Me:  Is there any particular struggle (besides everyday living) that you find yourself drawn to get involved in?

Tamsin: I'm astounded to read every day in the press and on the internet about the still endemic levels of sexism, racism and homophobia in our society - why can't people just let other people be what they are, even if that's different from themselves.  I'm not much of a one for throwing myself into protest marches, I admit, but I try to do what I can in my everyday life and in my writing to promote equality where I can.

Me: What do you have planned next as far as your writing career is concerned?

But if you want to keep abreast of all these various endeavors, drop by Tamsin's Superotica 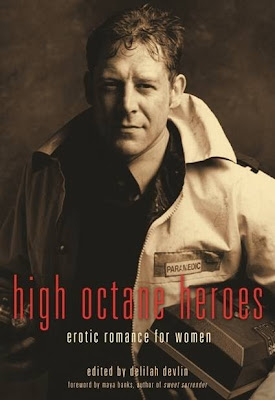 What is it about heroes like Superman, Iron Man or Thor that revs our engines like no other? Is it the suit? The manly physique? Or is it the courage they display, wading in where others fear to go, to save the damsel, the city, the Earth? Are there real-life heroes who inspire the same lustful fascination? Kickass iconic heroes who enter danger zones in the name of duty, honor, country—or maybe love—who conjure images of hard, chiseled bodies, deadly glares and camouflaged features?

High Octane Heroes will satisfy the reader who craves the romantic idea of that “super alpha” man. Imagine the Navy SEAL sent on a suicide mission; the damaged Army Ranger home from war; the para rescue team member jumping into frigid waters; a SWAT team member entering a human trafficker’s den… military members and based in far-flung places around the world or the smoke-jumper living next door. Then imagine the romantic possibilities of being held against that massively muscled chest by a man whose mission is to protect and serve…

Frankie and Melody are stranded on the side of a mountain, but luckily help is soon at hand...

The day wore on and we had no food and no drink.  Frankie was shivering.  I was getting desperate; I didn’t know what to do but I knew it was up to me to do something.  That’s when my imagination started playing tricks on me.  Voices singing in the distance.  A burst of sunshine through the fog.  The herbs-and-garlic smell of my favorite Italian restaurant.  The whop-whop-whop-whop of helicopter blades.

“Hooray!  We’re saved,” I cried, hugging Frankie, as the fog was blown away by the dark silhouette of a chopper above us.

She winced in pain and I gently let her go.

“So where are they going to land?” she asked.  “They’re probably not even looking for us.”

But thankfully she was wrong.  Seconds later a man in a bright orange mountain rescue tunic and helmet was being winched down to us on the bottom of a rope.  And what a man!  He landed on our shelf, unclipped his rope and took my breath away.  Six-foot-four of mountain muscle come to take command of the situation.  My chest heaved with relief.

“Either of you ladies hurt?” he said, shouting to be heard above the whopping.

I pointed at Frankie’s leg and he dropped to his knees beside her.  After a cursory look, he swung a pack off his back and removed his helmet.  At which point I was truly lost.  No one who’s on a rescue mission has a right to be that good looking.  Not when saving a person’s life already gives them such an advantage.  His face could have been sculpted out of granite, with sheer cheekbones, a strong jaw and a long, straight nose.  But it was anything but stony; his bright blue eyes were like sparks of electricity, while the sensuous curve of his red lips sent a jolt of current right through me.  And my fingers were straight away itching to rake through his tousled blond hair.

Tamsin Flowers loves to write light-hearted erotica, often with a twist in the tail/tale and a sense of fun.  In the words of one reviewer, 'Ms Flowers has a way of describing sexual tension that forces itself upon your own body.' Her stories have appeared in a wide variety of anthologies and she is now graduating to novellas with the intention to pen her magnum opus in the very near future.  In the meantime, like most erotica writers, she finds herself working on at least ten stories at once: while she figures out who's leg belongs in which story, you can find out more about her at Tamsin's Superotica or Tamsin Flowers.

Don't forget to leave a comment or question to let Tamsin know you stopped by.  Please make sure to leave your email address with your comment to qualify for the tour wide giveaway.  You can follow the tour here, the more stops you visit, the better your odds of winning.

One randomly drawn commenter will win the grand prize package (US only):
Posted by Maria D. at 1:00 AM