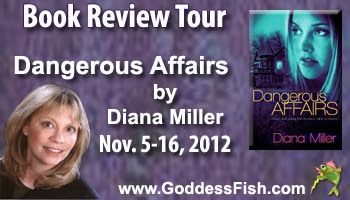 Welcome to my stop on Diana Miller's Book Review Tour for Dangerous Affairs.  Please be sure to leave a comment or question below for Diana to let her know you stopped by and to enter her giveaway.  Diana will be awarding a $25 Amazon GC to one random commenter during her tour.  You can follow her tour stops here, the more often you comment, the better your odds of winning. When soap opera star Abby Langford leaves Los Angeles for her Minnesota hometown, she’s hoping to give her nine-year-old daughter the peaceful childhood she never knew. But instead of tranquility, Abby finds an old knife hidden between the walls of her new house. Then the nightmares start: a blood-soaked victim and a killer’s arm slicing through the air, again and again.

Abby wonders if she’s having the nervous breakdown the tabloids claim she already had, especially when sexy, skeptical police chief Josh Kincaid questions her story. When menacing hate mail arrives, Josh’s professional concern for Abby soon evolves into an intense attraction, and the feeling is mutual. And now Josh wonders if her psychic visions are of crimes past—or a premonition of terrors to come.

To survive, Abby and Josh must uncover the truth and stop a killer . . . before Abby’s worst nightmares come true.

Abby rolled back the carpet, exposing the stain. “What do you think? Is this blood or just paint?”

“I started here. This carpet’s the ugliest,” Abby said. “I also spend a lot of time writing in here.” None of that was a lie.
He nodded slowly. “So yesterday you pulled out a door, vacuumed behind it, and found a knife flecked with what could be blood. Then this morning you decide to rip up the carpet in one bedroom and coincidentally find more blood?”
It did sound a little fantastic, but Abby certainly wasn’t telling him about the dream. “You think I dumped it there myself?”
“Makes it seem more like you’ve got a mystery in your own house, doesn’t it? It looks like paint to me, but I guess it could be real blood. I’m sure it’s easy to buy the stuff in LA.”
She threw up her hands. “Do you honestly think I brought blood out here with me? Just stuck it in a carton with my dishes and had the movers load it up?”
“Or you could have ordered it on the Internet.”

“Or stolen it from the Red Cross. Look, I didn’t pretend to find the knife for publicity, and I didn’t plant this stain for publicity. I told you, I don’t want any more publicity.”
When Josh didn’t respond, Abby massaged her temples and concentrated on taking calming breaths. If she’d been able to hold her tongue the entire six weeks Vanessa Mason had guest starred on Private Affairs, she could do it now. “I was simply trying to do my civic duty by reporting it.”
“Next time don’t bother.” 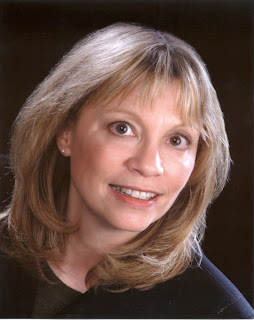 When she was eight, Diana Miller decided she wanted to be Nancy Drew. But no matter how many garbage cans she dug through, conversations she “accidentally” overheard, and attics she searched, she never found a single cryptic letter, hidden staircase, or anything else even remotely mysterious. She worked as a lawyer, a soda jerk, a stay-at-home mom, a hospital admitting clerk, and a conference host before deciding that the best way to inject suspense into her otherwise satisfying life was by writing about it.

Diana is a five-time nominee for the Romance Writers of America Golden Heart Award and winner of a Golden Heart for Dangerous Affairs—a romantic suspense novel that shows not everyone in her home state is Minnesota Nice. She lives in the Twin Cities with her family.

My website link is dianamillerwriter.com. I have buy buttons for both Amazon and Kindle on my website, but have no idea what you have to do to insert them since my web designer did it.

What begins with a simple household chore soon turns into an exciting mystery in Diana Miller's Dangerous Affairs.  With well developed characters, a comfortable setting and a well crafted mystery, Ms. Miller grabbed my attention on the first page and never let go.  Set in a small Minnesota town and filled with interesting secondary characters, this romantic mystery will definitely keep you on your toes.

Successful soap opera star Abby Langford couldn't wait to leave Hollywood behind with all of it's less than perfect memories.  Determined to give her daughter a better childhood than she had herself, Abby looks forward to renovating an old house and writing her first novel.  She didn't plan on finding an old knife hidden in the walls or on encountering a police chief who questions her reason for coming forward with what she's found.  Ms. Miller did a good job developing Abby's character and establishing her as a likable person; she's  a loving and concerned mother, she's smart and an attractive woman who's dealing with the fallout from a marriage which fell apart due to an unfaithful husband.  While she has no plans to fall in love again, she can't help be become attracted to the man who tries to protect her while solving the mystery she's landed in the middle of.

Once a detective in Chicago, Josh Kincaid is now the police chief of a quiet Minnesota town.  Determined to do his job well, Josh has no time or patience for a former Hollywood star who appears to be looking for extra attention.  No matter who her friends in town might be.  With a few bad memories of his own, Josh refuses to acknowledge how attractive the woman truly is.  Ms. Miller did a good job developing Josh's character; a hard and more than competent cop, he's got his own emotional baggage to deal with.  Tall, physically fit and sexy in his own way, Josh soon finds himself drawn to Abby and her precocious daughter Maddie.

As Abby and Josh work together to solve the mystery of the recovered knife and the hate male which Abby begins to receive - it's clear there really is something sinister going on.  It's also clear their attraction to each other isn't going away anytime soon.  I liked how Ms. Miller dealt with both Abby and Josh's issues from the past and paced their blossoming romance.  They definitely had plenty of chemistry to spare.

With well developed secondary characters, Maddie Langford in particular, and a well developed mystery with plenty of twists and turns, it's easy to get drawn into the story.  Without giving away spoilers, I will say the villain of the story was well disguised, I changed my mind several times as to who the guilty party was.

Will Abby and Josh solve the mystery before it's too late for Abby?  Will their attraction turn into something meaningful and give them both the family they both want?  You'll have to read Dangerous Affair to find out.  This was the first book I've read by Ms. Miller and I'm looking forward to reading more of her work.

FTC Disclosure: I received a complimentary copy of this book in exchange for a fair and honest review.

Please be sure to leave a comment or question below for Diana to let her know you stopped by and to enter her giveaway. Diana will be awarding a $25 Amazon GC to one random commenter during her tour. You can follow her tour stops here, the more often you comment, the better your odds of winning.
Posted by Maria D. at 12:30 AM