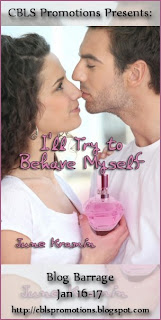 Welcome to my stop on June Kramin's Blog Barrage for I'll Try To Behave Myself.  Please make sure to leave a comment or question below to let June know you stopped by.  You can enter her giveaway using the Rafflecopter Form below.  You can follow her tour stops here. 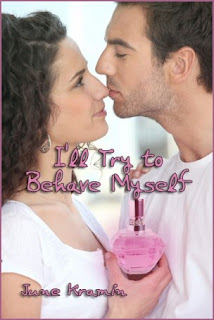 I'll Try To Behave Myself
by June Kramin

Published by Writers AMuse Me Publishing


Blurb:
When Char receives the news that she has been promoted to partner, she should be ecstatic. Instead, she is in Puerto Rico, having fled there after finding her husband in bed with another woman, her dreams of starting a family shattered.

Andy, her boss, unaware of what has happened, tracks her down to bring her back home. Encouraged by the tropical heat, the peaceful surroundings and the unending allure of water, they are soon drawn to each other in a way they had never experienced before. Char knows that her marriage is over. She also knows that an office romance is not what she wants. Her heart and his actions, tell her otherwise.

Char consistently pushes Andy away, trying to keep some semblance of order in her now-crazy life. Getting through one last major account becomes her focus; then she can concentrate on her future and her independence. Her plans are on track, until she discovers an unexpected souvenir from Puerto Rico: she is carrying Andy’s baby.

“It’s about time you answer your phone! Where the hell is my wife?”

“I’m doing great; thanks for asking. How are you, Payton?”

“What do you mean ‘you don’t know’? Why the hell haven’t you been answering your phone? You with her?”

“She took off, jackass. I don’t know where she’s at, but I do know she’s okay. At least, she was last time I talked to her.”

“You talked to her?” He sounded desperate to know anything he could.

“A few days ago, yes. My guess is she’s cooling off. Just let her.”

“Don’t tell me how to handle my wife!”

“Fair enough. You want pointers on your tart?”

“I figured she’d bawl to you about that. Look—”

“Suck it, Payton. I’m not getting in a pissing match with you. I’m not avoiding your calls; I just got my phone replaced and I saw that you called. Letting you know she was okay last I talked to her is as far as I’m going with you and trust me, that’s more than you deserve in my book.” Andy hit end.

“And what do I deserve?” Andy found Char standing at the doorway; she had been listening.

“Really? Am I any better than he is? Look at us.” Her lip began to tremble as she walked towards the bed then sat down.

Andy sat next to her, wrapping his arm around her. “It’s not the same, Char.”

“The hell it isn’t.” Harshly, she wiped away a tear.

“Under any other circumstances, this would not have happened between us. We’ve been away on short trips before. Nothing has ever happened. I didn’t think you could even stand to be around me half the time.” He stood, picked up a box of tissues from the dresser then sat back down. She accepted a few and blew her nose.

She let herself laugh a little. “I couldn’t.”

“See?” he said with another one of his grins. 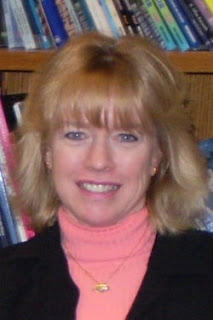 Wife, Mother, Writer, Lunatic. Not necessarily in that order.

June, who prefers to go by Bug, was born in Philadelphia but moved to Maui, Hawaii when she was four. She met her “Prince Charming” on Kauai and is currently living “Happily Ever After” on a hobby farm in a small town in Southern Minnesota.

She enjoys riding her Paint horse, Ringo, around the small ghost town they are playfully reestablishing with the neighbors and playing in Photoshop. Her son and daughter are her greatest accomplishments. She takes pride in embarrassing them every chance she gets.

Being hopelessly addicted to 80′s music is her super power.

Mix one terrific heroine, a cheating scumbag husband, a boss to die for and a hilarious gay assistant and you get June Kramin's I'll Try to Behave Myself, a lighthearted romance dealing with marriage, fidelity and finally getting it right.  With fun dialogue and plenty of emotional angst, Ms. Kramin's story grabbed my attention from the first page and never let go.

Getting ready to close on one of the biggest advertising deals in her life, Charlene "Char" Murphy, knows she's ready to go the next level on both a professional and personal level.  Discussing things with her husband before her sales pitch, she announces she'd like to start a family now that they've been married five years and things are going great.  While her husband slowly agrees, Char makes plans to go off the pill and leaves town to meet her client.  Arriving home earlier than expected, Char gets the surprise of her life when she walks in on her husband and another woman.  Leaving the cheater behind, Char takes off for an unplanned vacation.

Successful businessman Andrew "Andy" Banker has always known "Char" is both an excellent employee and a beautiful woman.  Knowing she's off limits because of her marriage, he's surprised when she leaves town for a sudden and unplanned vacation.  Discovering her husband's infidelity drove her out of town, Andrew knows Char needs a friend and decides to join her on her vacation - regardless of the fact he's uninvited.  Falling for her was not a part of his plan.

The scenes between Char and Andy are fun; they have great verbal chemistry and they are clearly good friends.  While neither one planned it; their mutual attraction - and Char's sudden freedom- lead them to drinking too much, losing their inhibitions and becoming intimate.  While I personally prefer for people to be completely free of previous romantic/marriage entanglements before they get involved with others (it's too much like they're all cheating), Ms. Kramin made it very clear that there would be no reconciliation between Char and her soon to be ex - even if he wanted one.  The emotional development between Char and Andy was well done and natural.

The secondary characters helped to push the story along and my favorites were Beth, Char's best friend who gave her some tough love and great advice, and JP, Char and Andy's new gay office assistant, who was a hoot.

When Char discovers she's pregnant will she give Andy a chance to prove his love?  And will Andy, a dedicated bachelor discover Char and the baby are all he's ever wanted?  You'll have to read I'll Try to Behave to find out.  I liked it and I think you will too.