ARC Review - The Guardian of Bastet by Jacqueline Battisti 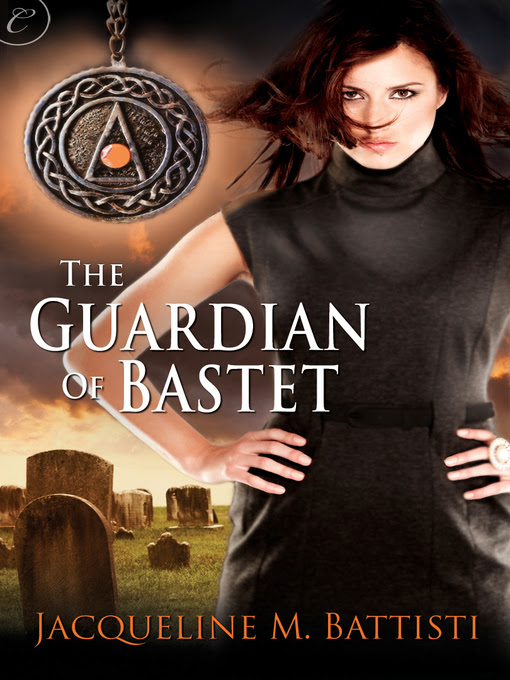 
Cat-shifter Trinity Morrigan-Caine has discovered a demon is killing supernaturals. Magically challenged, she has every intention of letting handsome Alpha werewolf Gordon Barnes handle it. But after a dying vampire gifts Trinity a mystical amulet, she is drawn into the fray as the legendary Guardian of Bastet, a warrior born when the need arises.

Though Trinity initially rejects the role, she warms to the idea when Gordon agrees to train her--and their passion for each other grows as he teaches her to embrace her animal instincts.

As she begins to accept her destiny and believe in her growing powers, Trinity realizes the danger is even closer to home than she ever imagined--and she and Gordon are going to have to face the demon in a fight to the death...

The opening lines for The Guardian of Bastet really sets the pace for the book, it's a funny, somewhat snarky paranormal romance with a unique heroine who is young, lovable and very smart.  Jacqueline Battisti's primary and secondary characters are an interesting blend of witches, shape-shifters, one vampire and a very bad demon.  With good pacing, snappy dialogue and just the right touch of sexual tension, The Guardian of Bastet is the perfect read for the upcoming Halloween holiday.

Trinity Morrigan-Caine is a young half-witch/half-shapeshifter who once a month changes into a cat - but not a werepuma like her father - a regular, ordinary tabby cat.  Along with her "shifting" deficiency, she's also having problems as a half-witch and even her mother has given up on her "training".  When the local vampire, Vincent, tells her she's going to be important in an upcoming magical problem, she really doesn't believe him; after all she's had a whole lifetime of being a failure.  I really liked how Ms. Battisti wrote and developed Trinity's character; at the start of the story she's funny, snarky and somewhat resentful of her magical situation but as the story develops, Trinity is forced to realize she's been a part of the problem all along - she's stubborn and hasn't been willing to take responsibility for her magic.

Gordon Barnes, the local werewolf alpha, is determined to protect his pack at any cost.  When one of his own relatives is a victim of the demon someone has summoned, Gordon decides he and his pack must take care of the problem.  He doesn't think he'll need any help but when he learns Trinity, one of the local feline shifters, has been named as the next Guardian of Bastet and is now the owner of the powerful amulet; he's willing to help train her.  Falling for her was not part of his plan.  I really liked how Ms. Battisti developed Gordon's character; he's definitely an Alpha male but doesn't hit you over the head with it.  He's the perfect foil for Trinity's personality.

The scenes between Trinity and Gordon are very well done, their dialogue is sharp and their chemistry is just right.  They make a powerful team both in and out of the bedroom.  As the magical forces unite to fight the demon, Trinity and Gordon will learn to rely on each other and emotionally grow stronger together.  I especially liked how Ms. Battisti developed their relationship, while it moved a little fast due to the length of the book, it's believable because they're not strangers and have known each other most of their lives.

The secondary characters are also well developed and I especially liked Trinity's parents, a powerful witch and a werepuma.  Trinity's grandmother even made a visit to help with Trinity's magical training.  The demon was the perfect villain and was quite detestable.  All in all the secondary characters added more color, more emotional tension and just enough action to help move the plot along.

When the showdown with the demon takes place, will Trinity be able to do what she must in order to send him back to hell?  And will Gordon and the rest of the magical community put all of their differences aside to help her?  You'll have to read The Guardian of Bastet to find out.  I really enjoyed it and hope Ms. Battisti develops this into a series with more books.